Are you still concerned about radiation crossing the Pacific from the crippled Fukushima nuclear plant in Japan, despite the steady stream of scientific advice that it poses no danger?

Now you can check radiation readings from right here in Berkeley, thanks to the monitors that the Department of Nuclear Engineering has on the roof of Etcheverry Hall. A team of scientists working under Kai Vetter is testing air and water quality (from rainwater) every day. 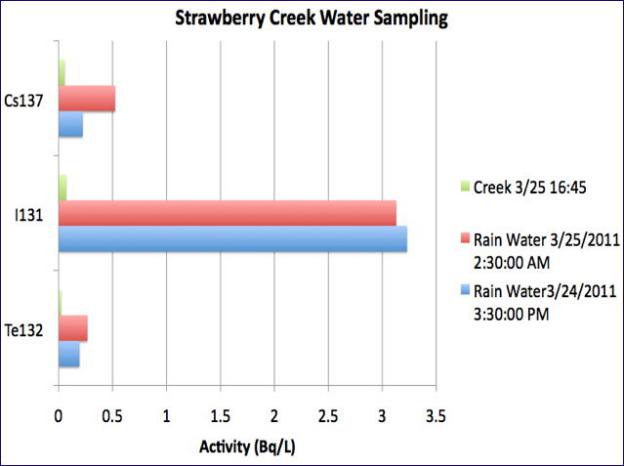 What are the results?

Unless you are the most irrational worrier in Berkeley, there’s nothing to be worried about. Although the measurements are in the standard Becquerels per liter, the Berkeley team helpfully translates the data into more understandable terms. .. No one will notice the difference in the before and after.

They have always been mutants.

Bottom Line: This is nothing but CAT scans are killing us...a little bit at a time.

Now this is a real problem, their bongs will glow in the dark, oh that’s alright no body cares..got a twinkie..

If there ever was a town that needed serious irradiating, its Berkeley.

Berserkley has been toxic for 35 years!

Play up the radiation numbers like the movie “On the Beach” and maybe the libs will off themselves.

Berkeley, hey? Where’s one of those neutron beams when you need it?

If there’s any place mutants will pass unnoticed, it’s Berkeley.

“Berserkley has been toxic for 35 years!”

Say what you will, but they didn’t name Californium, Lawrencium or Berkelium after Cambridge, MA!! We always got a kick out of these signs back when I used to hang out in Etcheverry Hall. I guess the City Council didn't know we had a nuclear reactor in the basement..

I think it’s a crock. Sensationalism! They found some TINY evidence of radiation in the water because they TOOK SAMPLES of the water! Dollars to dogturds that water had never been tested for RADIATION before. So now since the trouble in Japan they actually test the water, and SCHAZZAAM! There’s a little radiation in it. Which in all probability had been there all along.

Just think about all the nuke testing that went on in the southwest down through the years, within mere miles of California, and with NO reports of water contamination to my knowledge. The only problems with nuke testing back then was with the pacifist commie-lib vermin who didn’t want us to test and gain ground on their heros in the USSR! Buuut, that’s just me talkin’.

How much radiation am I exposed to in my daily life?

As Peter Caracappa, a radiation safety officer and professor of nuclear engineering at Rensselaer Polytechnic Institute pointed out on NPR recently, radiation is a part of nature. “Everything that’s living has some amount of radiation coming from it,” noted Caracappa. “Plus there’s radiation in the ground and the air.”

Where might I encounter radiation in the course of an ordinary day?

Well, bananas, as Caracappa points out, contain radioactive potassium. And as this handy, tongue-in-cheek infographic** shows, even sharing a bed with someone for a night will expose you to some radiation (about half the amount found in a single banana).