United States District Judge Claude Hilton, acting in the eastern district of Virginia, has ruled that the French-based food service and facilities management company Sodexo can proceed with an extortion claim against the Service Employees International Union (SEIU).

The SEIU, which has strong ties to the Obama administration, has been accused of using ties to the federal government to harass companies such as Sodexo. The alleged methods include using regulatory or government action to pressure or embarrass the company or its employees.

As shown by recent action taken by the National Labor Relations Board, including proposed rules to steamroll union organizing over company opposition and the fight to kill non-union jobs created by Boeing, the administration is not adverse to flexing it’s union muscles at the federal level.

Sodexo, which operates as a contractor in government facilities, military bases, schools and hospitals, says that the SEIU tried to “extort [the company] by threatening financial damage unless [it] cave[d] into its demands. The SEIU's campaign was designed to illegally threaten [the] company.”

Sedexo vowed to continue to “challenge the SEIU's illegal behavior until it ends,” says a statement released by the company.

The ruling means that the company can continue to pursue a civil case to stop the SEIU from using illegal tactics such as “blackmail, vandalism, trespassing, harassment and lobbying law violations, which were designed to steer government and private contracts away from Sodexo in order to damage the Company's business,” says the company.

The SEIU responded by saying Sodexo’s claims were “baseless.”

“The ruling means that SEIU will have an opportunity to prove the facts about our organization, our members, and our work regarding Sodexo,” said a statement released by the SEIU.

The Blog of the Legal Times says that the union has been accused “of carrying out a negative publicity campaign in order to strong-arm exclusive access to Sodexo’s non-union employees. Sodexo claimed the union was attempting to unlawfully unionize employees and increase revenue in violation of the federal Racketeer Influenced and Corrupt Organizations Act.”

According to the National Legal and Policy Center only 18,000 of the company’s 98,000 qualified employees have chosen to join the SEIU. In retaliation, says the NLPC, the union has carried out a campaign of intimidation that includes:

The NLPC also revealed that the union may be operating from an “internal SEIU monograph, titled Contract Campaign Manual. The monograph serves as a veritable bible for waging guerrilla warfare against recalcitrant employers. The Washington, D.C.-based free-market think tank, the Competitive Enterprise Institute, obtained a copy from the Public Access to Court Electronic Records (PACER) system.”

The NLPC says that manual encourages “jeopardizing relationships between the employer and lenders, investors, stockholders, customers, clients, patients, tenants, politicians, or others on whom the employer depends for funds.: The manual also recommends applying legal and, most telling “regulatory pressure” in order to “"threaten the employer with costly action by government agencies or the courts."

Where would the regulatory pressure or government action come from? The SEIU reportedly spent $60 million electing Barack Obama.

The manual, says the NLPC, goes on to encourage organizers to personally harass board members, shareholders and management officials with “dirt” in order to further facilitate union organizing at a target company.

On July 1st the Competitive Enterprise Institute published the SEIU’s plan “to launch a national campaign of economic strong-arming and sabotage. Their plan envisions mortgage and student loan strikes and bank boycotts. Also contemplated are acts of harassment and intimidation directed against bank officials, corporate heads and public officials deemed to be enemies of the people.”

So if indeed the SEIU has been guilty of illegal activities such as using government influence to threaten or intimidate companies or individuals, the question is how much does the Obama administration know and how high does it go?

Adulterating food should be a crime punishable by hanging.

ALL Government employees should be BANNED from Unions, period.

The answer is—the all mighty 0bamo knows everything that goes on, period. Just proving it with all the other corrupt minions he put in offices that cover his azz, is the problem. As NLRB deliberates on Boeing, union takes organizing into its own hands

12 posted on 07/28/2011 7:37:14 AM PDT by Kaslin (Acronym for OBAMA: One Big Ass Mistake America)
[ Post Reply | Private Reply | To 11 | View Replies]
To: thouworm; CutePuppy; Grampa Dave; stephenjohnbanker; Condor51
REFERENCE The IRS has pinpointed tax-exempt "foundations and charities" as the locus classicus for tax evasion and money laundering. The BIGGEST tax-exempt fraud --- a tax-exempt foundation writing checks to a tax-exempt charity (the way crooks look "altruistic" as they siphon off tax-free money for personal/political uses).

How many tax-exempt checks did ACORN write to it's sister organization----SEIU?

The tax-exempt Clinton Foundation had just donated $250,000 to ACORN.

Senate Finance Committee Study ACORN comprises a mind-boggling 94 different affiliates, that amounts to "a big shell game," a biting Senate Finance Committee study shows. The study, by the staff of Iowa Republican Charles Grassley, reveals four ACORN charity groups give more than half their revenue to taxable entities that engage in "impermissible lobbying and political activity."

ACORN and it’s subsidiaries for decades have moved taxpayer money into their own pockets and into the left-wing Marxist machine.

Sen Charles Grassley's documents show leaders of ACORN community groups transferred several million dollars in charitable and government money-----meant for the poor---- to parts of the group that have political (and sometimes profit-making) missions.

Sen Grassley's documents indicate that ACORN's tax-exempt groups----along with its tangled web of allied organizations---- used more than half their charitable and public money in 2006 to pay other ACORN affiliates.

The head of SEIU (I forget his name) say someone like this and it's on video: "We use the power of persuasion and when that fails, we use the persuasion of power." Sounds like extortion is policy to me. Go Sodexo!! Pound the creeps!

The French helped us during the Revolutionary War and they are helping us now in the war againt (labor) Union Agression. My opinion of the French is slowly changing for the better.

Closer to the Brownshirt street thugs of the SA (Stormtroopers).

So if indeed the SEIU has been guilty of illegal activities such as using government influence to threaten or intimidate companies or individuals, the question is how much does the Obama administration know and how high does it go?

How high? Sheesh come on. It goes right to the interloping Kenyan POTUS.

'Past President'(LOL) of SEIU, Andy Stern, practically has a desk next to Barry in the Oval Office. And has a Red Hot Phone line connected right to Eric Holder.

There's no doubt SEIU is guilty of RICO Violations. But the chances of getting charges filed or indictments against them by the DOJ is right up there with traveling to Saturn for a weekend vacation.

Furthermore, it wouldn't surprise me one bit if SEIU has a list of Companies that SEIU was to told target with their Union Hiring extortion rackets that was hand written and delivered in person to Stern by Obama himself!

However the problem is -- how do 'we the people' stop them? In both their cases Obama and Holder know that if any action is taken against them by congress, like Impeachment, that would result in America going up in flames by 'Their People'. That's their 'Ace In The Hole' and everybody knows it. But even if it wasn't, I don't think our modern justice system is capable of meting out the penalties they actually deserve when found guilty of Subversion and Treason.

What would be appropriate would be some good old fashioned 1776 type of Justice for their acts against America. Even having them sit in the ADMAX Prison at Florence CO. for twenty years wouldn't be enough. 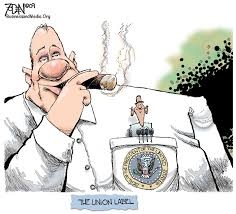 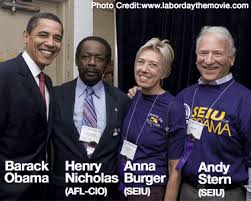 SEIU "Past President," Andy Stern, has a desk next to Barry in the Oval Office. And a Hotline to Eric Holder.