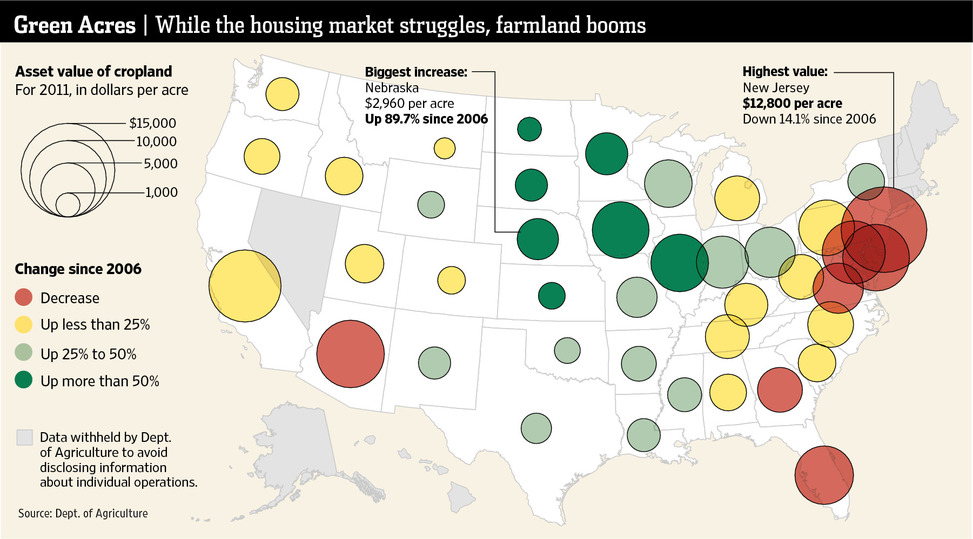 Five years into a brutal national housing downturn, raw land destined for residential development has fallen so far in value that thousands of acres across the country are being used again for agriculture.

During the fast-moving days of the housing boom, real-estate speculators in California, Arizona, Florida and other states paid top dollar to buy land from farmers and convert it from citrus groves and cotton fields to potential subdivisions.

Now, with crop prices soaring and housing in a deep slump, the economics of land investment have turned upside down. Farmers and investors are buying land that had been slated for development and using it for agriculture. And they are paying a small fraction of what housing developers paid for the same land before the recession.

The trend, if it continues, could represent a historic shift away from development in the far reaches of metropolitan areas. These properties had fueled much of the housing industry's bubble last decade.

In September, the Vanderweys, an Arizona dairy farming family, paid $8 million for a 760-acre alfalfa and cotton field that had fallen into foreclosure in Buckeye, Ariz., about 30 miles west of Phoenix. That same parcel, called Liberty Farm, had been sold to real-estate speculators in 2005 for $40.8 million. The Vanderweys want to plant hay.

I’ll be glad when the price of rural real estate starts to climb again, so we can get back to the important business of bashing corn ethanol, instead of wasting our efforts to repeal Obamacare and kick all Demwits out of office. Thanks MinorityRepublican.

This is the best news I’ve heard in eons.

5 posted on 11/13/2011 8:42:48 PM PST by musicman (Until I see the REAL Long Form Vault BC, he's just "PRES__ENT" Obama = Without "ID")
[ Post Reply | Private Reply | To 4 | View Replies]
To: MinorityRepublican
I know of a developer in Boynton Beach (Palm Beach County) that bought an 8.4 acre parcel of land, immediately adjacent to the Florida East Coast Railway mainline tracks in late 2005. They borrowed $12.4 million for the land and received permission to build 81 housing units (basically row-house condo units). The streets were laid out, underground utilities laid in, and what would have been the community center/pool house building was partially constructed. Then the plug was pulled, sometime in 2007. For 4 years there was a "Coming Soon, Spring 2008!" billboard hawking the property, along with weeds shooting up next to the PVC pipes jutting up from the sand where houses were supposed to be built. The bank foreclosed and after taking it into REO inventory - just recorded a sale of the property for $1.9M. So the bank ate $10.3M. Repeat this story ad nauseum across Florida, Arizona and Nevada, and know that, in the end, you are paying for it.

Once we get rid of ethanol subsidies, the prices in the midwest will go in the toilet.

Until the developers prevail upon the EPA to fine the family $35 million for kicking up dust in their farming operation, this will probably work out well.

I used to go to visit family in Miami in the 1990s and early 2000s. Every time I was amazed to see another bunch of Nice big houses being built. I kept thinking, where are they going to find the people to fill all these houses. Sadly that was a good question. Farmland is good, and we can export food and lower our balance of payments.

The Missus and I just bought a house after leasing for 3 years in south Florida. We moved to Florida from Georgia in the aftermath of the bubble collapsing and we could see that, when we arrived, prices were in free-fall and it wouldn’t make sense to buy at that point. Over the three years we probably paid $90,000 in rent, but the price of the house we purchased last month fell from ~ $550K to $300K during that 3 year period. And interest rates moved to the 4.0% vicinity. The original owner, who sold it to us in a short sale, paid essentially $700K for it in April 2006.

If you can qualify for a mortgage - it is an unbelievable time to buy down here. Lots of really beat homes where owners heading into foreclosure vindictively destroyed their properties as they left. But for every 20-25 houses like that, you could find a clean one with few encumbrances and a bank willing to do a short sale.