Oakland unveiled an austere budget Monday that calls for sweeping cuts to community favorites like Children's Fairyland and the Oakland Zoo but keeps police services intact.

In all, more than $28 million will be sliced from the budget, mostly from the $388 million general fund. The cuts are due to the loss of redevelopment funds, which Oakland used to fund services and programs across the city.

"It's not clean and neat. We wish it were," said Mayor Jean Quan. "For California's older, larger cities, like Oakland, losing these redevelopment funds has been very, very tough."

The City Council will discuss the budget Wednesday and vote on a final version Jan. 31, just hours before the state eliminates redevelopment funding Feb. 1.

Last week, city officials issued layoff notices to 2,500 of about 3,000 employees in anticipation of the cuts. At least 159 full-time positions were scheduled for elimination. Officials said they issued such a wide swath of pink slips because they wanted maximum flexibility in deciding what positions would be cut.

But after reorganizing departments, cutting back on overlapping services and reducing administrative costs, the city was able to lower the number of job cuts to 105. Sworn police officers and firefighters are not affected.

The cost so far to the taxpayers of Oakland for the OCCUPY Oakland incursion is 3 million plus .. that's just for police, fire etc,, add the loss of business income to those caught in the path of anarchy.. The message.. Priceless.

Oh what a loss.

Just go to the Castro District

If there were a better name for Michael Jackson's legacy property....

Snark is your life, apparently. I wish you whatever empty satisfaction you get from it. Real people live here, not just cartoon targets.

Childrens Fairyland was one of the few genuinely little-kid friendly places anywhere in the area. We took our kids there for years. We had birthday parties there. Our kids have outgrown it, but its a sad thing that its gone for the next generations.

Do you really think that the civilized working tax paying people of this country are going to feel sorry for Oakland???
If you do you are delusional.

I don’t want to sound mean, but if Oakland is such a shithole, you need to be thinking abut leaving, not griping on FReepers.

Never made it to the zoo or Fairyland. a shame they fail to see the value.

I can offer you to come to San Josie and visit HaPPyHollow.. they spent dough there not too long ago to ‘vamp it up.

Just out of curiosity, while it may be a wonderful place, why is Children’s Fairyland the taxpayers responsibility?

Yes, this is actually a loss. Children`s Fairyland has been there for many decades.. it`s an enjoyable and positive experience for kids... Went there as a 6-year-old kid with the family in 1963.

My little son and I visited Fairyland last April. It’s sweet, fun, and imaginative. I’m sorry to hear that the innocent kids have to suffer for those loser worthless Occupiers. Political correctness is as bad as racism.

The problem with areas like this, you have a lot of great venues sitting right there but a lot of folks never take advantage of visiting them.. I can count on two hands all the places I have never been and that’s just SF and southward.. sitting just a few exit ramps away.

It`s like a city park. It`s one of those rare instances in which tax dollars are well spent there.

Children’s Fairyland was one of the best attractions in Oakland. I spent many a Sunday afternoon there with my kids. But, that was more than 40 years ago.

And the Oakland Zoo was delightful too. Sorry to see them destroyed. Perhaps both attractions can be the beneficiaries of community raised funds. 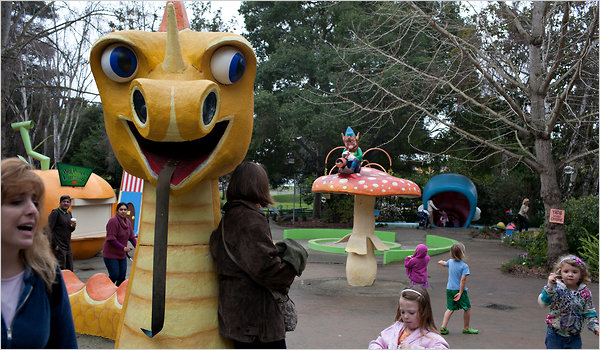 Children’s Fairyland, the storybook theme park, is designed for children ages 2 to 7 who are about three feet tall.
By HANK PELLISSIER
Published: February 5, 2011

Big Name at the Beginning

Arthur Navlet, an Oakland nurseryman, suggested the idea of Children’s Fairyland in 1948 to a civic group, the Lake Merritt Breakfast Club. Local sponsors like Gov. Earl Warren, who went on to become chief justice of the United States, raised $50,000.

Walt Disney toured amusement parks, including Children’s Fairyland, in 1950, seeking ideas for what turned out to be Disneyland. Five years later, he opened his Magic Kingdom, using the same storybook themes and also some of the Fairyland staff.

Children’s Fairyland is designed for children ages 2 to 7 who are about three feet tall. The merry-go-round animals are diminutive, and the Alice in Wonderland Tunnel and Jolly Trolly Train are proportioned for toddlers.

Frank Oznowicz was an apprentice puppeteer at Children’s Fairyland when he was a youngster in Oakland. He later shortened his name to Oz and became famous creating whimsical creatures for The Muppets and “Sesame Street,” plus Yoda of the “Star Wars” series.

The Fairyland Personalities program enables youngsters aged 8 to 10 to become storybook characters in the park and at civic events. Councilwoman Libby Schaaf of Oakland was Raggedy Ann in the 1970s.

After serving as the Mad Hatter personality 40 years ago, Randal Metz now works as the puppet master at Fairyland’s Open Storybook Puppet Theater, the oldest continuously operating puppet theater in the United States.

Children’s Fairyland sells Magic Keys for $2 that activate talking boxes by the storybook sets. Many Oaklanders have 50-year-old keys that still work.

The storage room behind the puppet stage holds more than 1,000 puppets for approximately 150 shows. The Hamlet marionette was created in 1930 by Ralph Chesse, the painter of a Coit Tower mural.

Though the $8 admission price is lower than that of many other theme parks, Fairyland waives it for 5,000 low-income children annually.

As I remember, no adult can tour Children's Fairyland unless they are accompanied by a child.

Back in the day, I got to help supervise a class trip to the Oakland zoo, and I really enjoyed it.

LOL, obviously the city of Oakland needs to cut funding for the “Children’s Fairyland” because it is still spending like crazy on the “Adult Fairyland” (Occupy Oakland).

I lived walking distance from there when I was a kid, back in the late Sixties. I used to go feed the seals and ride the little train around.

It is a public park, which at one time was also supported by donations and entrance fees.