OWS Letter to the Editor in USA Today: We Will Storm Wall Street With Guns
Big Journalism ^ | 2/22/12 | Ben Shapiro

Over at USA Today, a self-employed massage therapist from Austin, TX has a letter to the editor responding to an editorial suggesting that Occupy Wall Street has lost its way. (Snip) '' So maybe they should take up their Second Amendment-sanctioned guns and storm Wall Street and our nation’s capitals. If our country doesn’t change, it could very well come to that one day.'' Notice the language here. Rich Latta, the author, threatens outright to head to Wall Street with firearms. Janet Napolitano, where are you? He says they out to head to Washington, D.C. packing heat. Secret Service, you’re

But, if someone had made such threats on this website, all hell would come down on them from Janet Incompetano and Eric Holder.

They neglect to realize that cops carry bigger guns!

I bet half of them shoot themselves.

The problem is that Obama's Idiots are getting off script. They were supposed to be a counter to the tea party. Instead they are turning into a 1968 out of control mob. The tea party was frightening (to the left) because it showed discipline and control. They showed up when called. Spoke of commonly held values of family, unity and tradition. Picked up their trash, and went home without trouble. Discipline and control is the difference between a rabble and an army.

The occupy group can't even work their way up to rabble. They have no common goals. They don't appeal to commonly held values of society. They show up where the democrats don't want them. They destroy the ground they occupy. Finally they won't go away.

I fully expect Obama to do a night of the long knives on Occupy. The original night of the long knives took out the SA in order to win the support of the German Army. The elimination of Occupy will be the price of continued elite, rich, liberal support of Obama. Hippies smoking pot is one thing. However; Warren Buffet and the Hollywood elite don't like hippies with guns taking pot shots at their limousines.

I wonder if DHS will begin terrorist training using OWS as examples as they did with the Tea Party. 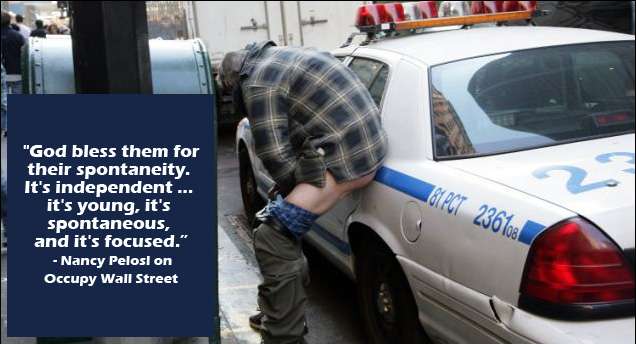 This is just the kind of threat that will enable the police to not allow them to assemble in the first place.

We all know that government offices need occupying, not financial institutions working within the law.

The root of our problems are lousy government; not lousy capitalism.

OWS is running your country.

You should be so proud.

This clown does know that there are ~36000 police officers in NYC, right? AND the surest to get the attention of ALL of them is to go armed, en masse to Wall Street...

May not be what it seems.

Expect to see this as further justification for a gun ban.

Reminds me of something my Drill Instructor said whilst chastising us young recruits during Marine Corps boot camp.

We had disappointed him during one day at the rifle range so as we heading back to our barracks, he would not allow us to march in formation. He instructed us to pull our covers down as far we could on our heads, then look at the ground, and then cram together and shuffle-step all the way back. The guidon was to be carried upside-down to further humilate us.

He told us at that point in time we were not a platoon, we were a mob. Then he said, "You're not a mob, a mob has a leader! You're nothing but a herd!"

How could these pussies have guns when they’re anti-gun libtard morons?