Two women were ousted from a Kentucky private park because a gatekeeper said same-sex couples were 'not welcomed.' Mrs Miller-Poole told the Richmond Register that she often does portrait sessions in the park and has never had an issue.
.
.
'It was just a peck of a kiss,' Miss Chenault, who is expecting, said to WKYT.

Moments after the intimate moment, a gatekeeper told them to leave.

'He said that we had to leave and that it was inappropriate,' Mrs Miller-Poole said.

'The man said,"Those type of people were not welcomed."'

The shocked photographer was even told she would be banned from taking photos in the park if she brought 'those things with you' again.

The couple said that they've experienced stares and name-calling, but never outright abuse. But it looks like they weren't the first couple to experience this kind of discrimination and they won't be the last because of Kentucky state law.

'It is legal to discriminate against people because of their sexual orientation here in Richmond,' Richmond Human Rights Chairperson Sandra Anez-Powell told the Richmond Register.

'They can be kicked out of public places, fired from their jobs and denied housing, a right that heterosexual people like me enjoy. '

The women went home weeping after the incident. Adam Arvin, the manager of the park, had no comment.

The Victimology is strong in this one.

2 posted on 07/16/2012 11:46:54 AM PDT by AppyPappy (If you really want to annoy someone, point out something obvious that they are trying hard to ignore)
[ Post Reply | Private Reply | To 1 | View Replies]
To: kevcol
The women went home weeping after the incident.

I don’t believe in a gay gene but based upon the one on the right is why I firmly believe some gays had a hormonal balance problem while developing in the womb which leads to their confusion. 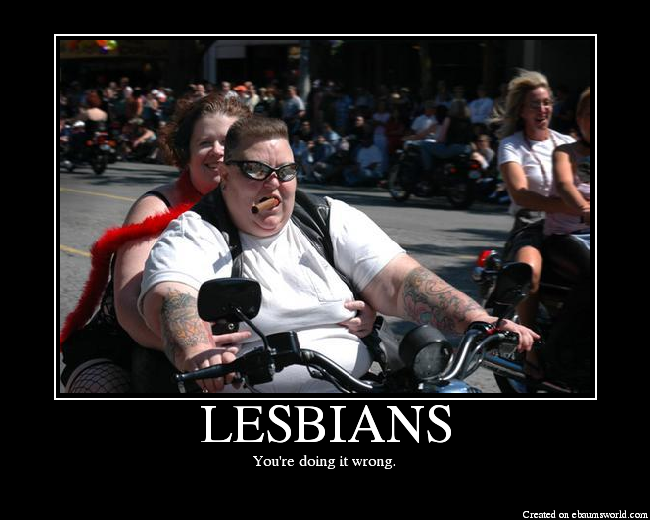 6 posted on 07/16/2012 11:51:23 AM PDT by Responsibility2nd (NO LIBS. This Means Liberals and (L)libertarians! Same Thing. NO LIBS!!)
[ Post Reply | Private Reply | To 1 | View Replies]
To: trailhkr1
but based upon the one on the right is why I firmly believe some gays had a hormonal balance problem while developing in the womb

or simply the result of Testosterone therapy (or homone inhibiters) - quite popular with the butches.

They go on private property with a photographer to make sure everybody notices them then they start making out. The whole point was to get kicked off the private property and then get in the news. These lesbians are doing it all over the place to destroy Christianity. Notice, however, they never do it to Muslims. They never go to Dearborn and march. They never go to NY Muslim neighborhoods and make out. Why is that?

They have no right to scare children.

9 posted on 07/16/2012 11:54:10 AM PDT by bmwcyle (Corollary - Electing the same person over and over and expecting a different outcome is insanity)
[ Post Reply | Private Reply | To 1 | View Replies]
To: trailhkr1
...the one on the right is why I firmly believe some gays had a hormonal balance problem while developing in the womb which leads to their confusion.

The one on the right has perfectly normal Irish features and hair texture. With a makeover, she could be very attractive. But "as the mind thinketh"....

And that's why God said, "Be ye transformed by the renewing of your mind." Recent brain studies in the study of stroke and other brain injuries have found that people's brains build cells in areas that they think about and practice frequently, such as playing a musical instrument or re-learning a motor skill after a brain injury. It's not a stretch to believe that repeatedly engaging in gay sex will lead to a gender-disordered outlook and appearance.

By the same token, de-emphasizing a behavior and growing brain cells (very slowly) in other directions could ostensibly "renew one's mind."

11 posted on 07/16/2012 12:18:51 PM PDT by Trailerpark Badass
[ Post Reply | Private Reply | To 4 | View Replies]
To: trailhkr1
I don’t believe in a gay gene but based upon the one on the right is why I firmly believe some gays had a hormonal balance problem while developing in the womb which leads to their confusion.

Same as with gay men. Why is there one usually more swishy than the other who wears the apron? Everything about these bizarro relationships is merely an imitation of heterosexual relationships. If there was anything "normal" about them, lesbianism would be "like in the movies".

Lesbianism, gives the ugly chicks a chance for love...

It is a learned, Godless worldview as all Ancient civilization and the Samurai and today’s Afghanistan proves. If it isn’t learned behavior (what a concept!!!) then the boys in Afghanistan wouldn’t all be wishing for harem of boys to sodomize when they are adults.

It is like bestiality—all sexual behavior is learned—perversions are taught by demeaning or disparaging a child’s sexual identity—and by trauma or sexual abuse. Most homosexuals—and people like Chastity Bono were sexually abused as children.

Advocating and promotion of homosexual behavior is evil and advocating child abuse.

It is the same as baby rapers....they learned the behavior...they were not born with the desire to sodomize or rape babies. That “idea” of genetic behavior is STUPID.

You can pervert any young child’s sexuality by confusing them before they can understand reality. It is easy and evil people do it all the time. That is why it is intrinsically disordered and sick. It is unnatural and a evil way to look at same sex which reduces people to sexual objects-—the elimination of true friendship which is based on selfless love can not exist where you allow homosexual behavior to be “good”. It is confusing children and destroys logic and reason and Christian Ethics—the roots of our Constitution.

Oh my! Where is Austin Powers when you need him?

It wasn’t a “public” place. It was a private park. However, under “public accommodation” law, the owner will be forced to admit these hags the same way he would be forbidden to bar blacks or others. Just watch ...

No, they are not.

There are "gay" parks everywhere, regularly visited by the police.

Why can't they find one?
There are on line maps, even.

I knew a lot of fat homley guys in High School that would have claimed to be lesbians to be able to get a girlfriend...... Amazing they claim to be attracted to ladies but they pick the most “butch” people to be with.