It’s been an unrelenting process. Survey after survey—most recently “The Lost Decade of the Middle Class“But there is a new phenomenon: a ballooning lower class. It now engulfs 32% of all adults. In America! Where lower class is the unmentionable class, the class that doesn’t exist, just like the upper class doesn’t exist, but for different reasons.

Political candidates trip all over each other to promise debt-funded goodies and tax cuts—real or imaginary—to the “middle class.” They all claim that a thriving middle class is the foundation of the American economy. The middle class rules! “Everyone is in the middle class,” I was told in high school by the dad of the chick I was dating. That was in the seventies. Now 32% of all American adults find themselves in the unmentionable lower class, according to a survey by the . Pew Research Center Up from 25% in 2008. And none of the presidential candidates has even mentioned them.

A similar phenomenon is playing out in Europe, with more acute overtones. “Poverty is returning to Europe,” said Jan Zijderveld, head of Unilever’s European operations. The world’s third largest consumer products company was adjusting its commercial strategy to this new reality, he said, by redeploying to Europe what worked in poor countries of the developing world. Other stars of the industry affirmed it. “The logic of pauperization,” L’Oréal CEO Jean-Paul Agon called it read.... The “Pauperization of Europe”.

Education does matter but isn’t a guarantee: 41% of those with a high school education or less ended up in the lower class. But even among college grads, the trend is grim: 17% considered themselves in the lower class, up from 12% in 2008.

While upward mobility survived, despite the headwinds, there has been a pernicious economic maelstrom: “downward mobility.” The middle class has shrunk from 53% to 49% since 2008, and the upper-middle class from 19% to 15%. Only the upper class has remained stable at 2%. These movements resulted in an awful number: 38% of the people in the lower classes were new arrivals.

Political persuasion didn’t matter, however. Of those in the lower classes, 32% were conservatives, 30% moderates, and 33% liberals.

The system, it seems, has succeeded in wringing out any excess enthusiasm from those who are struggling to climb the hurdles in front of them, though that very enthusiasm is a vital ingredient in economic success:

And it has had a harsh impact on the economy: 84% of the people in the lower classes cut back on spending last year. But then, 62% of the lucky ones, those that remained in the middle class, and 41% of the even luckier ones, those in the upper classes, also cut back. A sign that the tough times have left skid marks.

Yet hope has been swirling around the financial markets. The Fed keeps dangling QE3 out in front of them, and the European Central Bank has come up with its own juicy carrot. Then, just as markets reached multi-year highs, there was an ugly dose of reality. Read.... . The Calamity Economy Strikes Again, But Hope Is Back In Vogue

Which group supported Obama the least in 2008?

What better way to reduce our impact than to drive us into poverty? 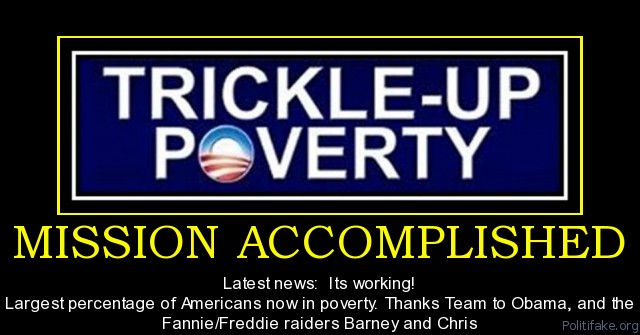