This Graph Should Scare You
Washington Post WonkBlog ^ | November 18, 2012 | Staff

A new study from the Congressional Budget Office starts with the scariest graph you’ll see today. In other words, you’re not imagining it: This economic recovery has been a big disappointment relative to what the United States has usually experienced after a recession. Growth has been 9 percent below what was seen in past recoveries on average in its first three years. The CBO report tries to disentangle where that underperformance is coming from and its answer is deeply unsettling: The U.S. economy just isn’t as good at growing as it used to be.

The new CBO report claims that two-thirds of the underperformance of the economy over the past three years compared to a typical recovery is due to a slower rate of growth in potential GDP. Only one-third, in this analysis, is due to factors related to this recession.

Potential GDP is the measure of what the economy is capable of producing if almost all of the people who want jobs are able to get one and almost all its machines and buildings were humming at their potential. While it has grown consistently through modern U.S. history (we can thank a growing population and steadily improving technology for that), it doesn’t always grow at the same rate. In periods when baby boomers were reaching their working years and women were entering the workforce in large numbers, the rate at which potential GDP rose was very high, over 4 percent at times, by the CBO’s reckoning.

In recent years, though, those trends have reversed. Baby boomers are starting to retire and the proportion of women who work has leveled off.

TOPICS: Business/Economy; Extended News; Government; News/Current Events
KEYWORDS: obama; obamageddon; obamalaise; obamanomics; obamasized; obamasizing; ownit Navigation: use the links below to view more comments.
first 1-20, 21-40, 41-60, 61-66 next last
And Zero is quite pleased with himself today as only the very beginning of things to come.
1 posted on 11/18/2012 2:18:41 PM PST by lbryce
[ Post Reply | Private Reply | View Replies]
To: lbryce

Egggsactly! His mentors..Cloward and Piven are justifiably PROUD of their Marxist protege’.

>>This economic recovery has been a big disappointment

What economic recovery? I have more unemployed friends now that ever. I know more underemployed people than I’ve ever known. Prices are up. Wages are stagnant at best, but lower for many. Even my 401k has not even made up the losses of the last 4 years.

Where is the recovery that I keep hearing about, or is all just statistical smoke and mirrors?

The ice cream vendor - Zero - is preparing to give out more ice cream with “taxes on the rich” and the free ice cream will attract more voters. What scares me is the current underground move to abolish the 22 Amendment. The Petraeus sex scandal is what the right hand is doing. What’s the left hand up to?

It's all because Republicans stayed home from the stores

Must be because of racism!/s

The difference is that previously they guy in the oval office supported recovery. This time, 0bama is working to prevent recovery.

you didn’t stay home did you?

Washington Post: It appears that the Emperor may not be wearing much in the way of clothing.

Well, what took y’all so long to deduce this?

We see the disincentives all around us these days for hard work, playing by the rules, being innovative, etc. Do these things and you’ll be punished for your efforts by the state, and demonized if you actually overcome the ever rising levels of taxation and regulation and somehow succeed. Being a parasite is where it’s at these days - not a host. There’s no fun in that, especially with Obamaclaus and the demo-elves in power.

And we all know that the government inflation numbers are completely bogus and wildly under report the true inflation numbers so drop the slope of that line by about 50% if you want a more realistic representation of the “recovery rate”.

I’ve read the CBO report and I highly recommend that Freepers go read it.

The CBO makes a bunch of observations, but falls short of making a diagnosis because to do so is socially inconvenient and embarrassing in DC, where the received “conventional wisdom” chants ideas that we need more “free trade” to export more of our actual wealth creation while importing more unemployment through immigration of low/no skill immigrants, 56% of whom are on public assistance within a year. 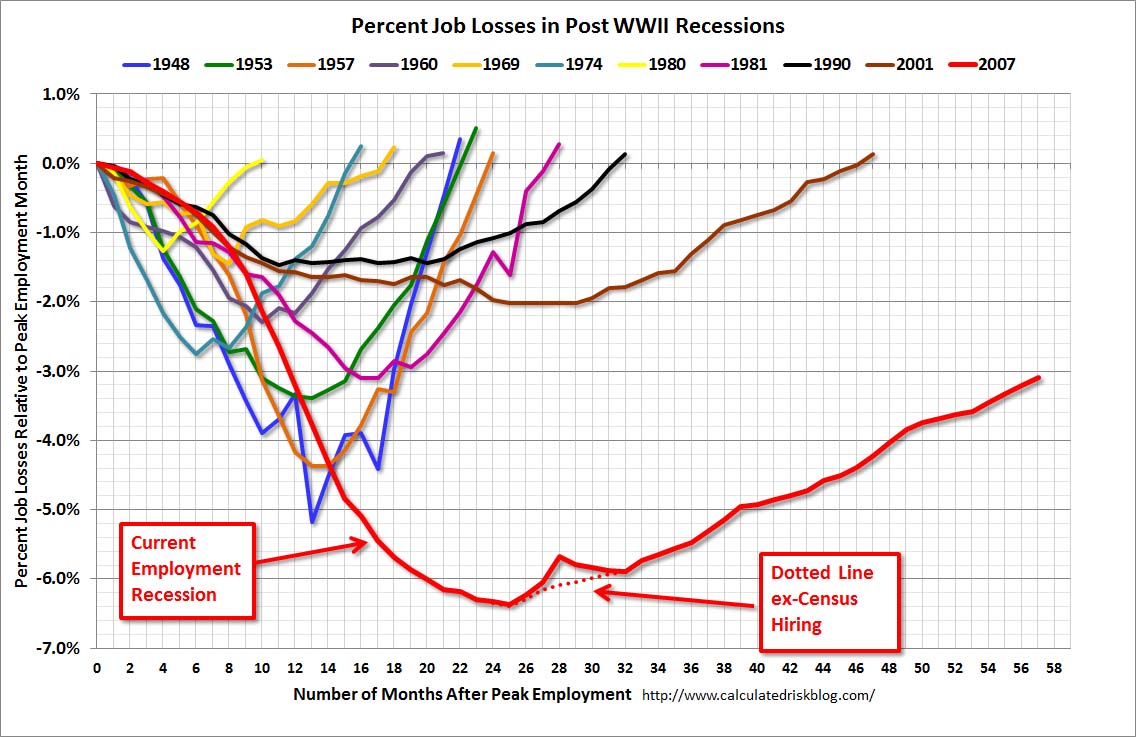 Dapper, so glad to have an alternative analogy to Santa. Can we forward to Rush, just as a suggestion. Am begging him to drop Santa, a caricature of a true person in history, St. Nicholas, who did tons for children without taking anything and who has a list of the undeserving (and uses it- from my experience).

Ugh, Comparing Hussein to him.

That’s pretty much where I’m coming down, and too many Republicans don’t want to admit it. Especially the clowns in DC.

But, numbers don’t lie, and unlike economists, engineers don’t let numbers lie and we don’t make simplifying assumptions... if engineers did their math the way economists did, you’d see engineering papers start out like this:

“Assume there’s no friction or gravity...”

The most interesting thing about that graph (which I’ve seen many times before) is to take notice of how the shape of the recovery curves has changed since a) we’ve gone to a completely fiat currency, which b) has allowed the Fed to have complete control over monetary policy. As we can see, the post ‘73 recessions have much more “rounded” recovery curves, and every recession has required longer and longer periods of time to recover from, albeit with less sharp declines in unemployment.

This has resulted in the bottom, 2007, curve, which shows that the ability of the economy to purge itself of mis-allocation of capital has now been so impeded that it cannot recover and employment is taking forever to recover.

There has been no “recovery”. Even back when the economy was supposedly “good”, it wasn’t as we were busily off-shoring jobs and building up debt on top of debt, while expanding government handouts. It was all a sham.

Now we simply have a house of cards that they are trying to keep from falling.