In light of the recent revelations that the IRS has been unfairly targeting conservative groups, President Obama’s half-brother “got a sweetheart deal” from the IRS. According to the Daily Caller, Lois Lerner, the senior IRS official at the center of the decision to target tea party groups for burdensome tax scrutiny, signed paperwork granting tax-exempt status to the Barack H. Obama Foundation, a shady charity headed by the president’s half-brother that operated illegally for years. Lerner approved the foundation’s tax status within a month of filing.

But now there is evidence that the Barack H. Obama Foundation is linked to terrorism and genocide. …In 2010, Malik Obama attended the Islamic Da’wa Organization (IDO) conference in Khartoum, the capital of Sudan. One of the objectives of the IDO is to spread Wahhabist Islam across the African continent.

Al-Bashir wasn’t just present at the conference; he supervised it.

In this photo, from the Barack H. Obama Foundation (BHOF) website, headed by Malik, Omar al-Bashir can be seen dressed in black, to the right. Another man to take notice of is seated directly to the right of Bashir; his name is Suar Al Dahab.

Al-Bashir and top Sudanese officials are pictured with Malik Obama on the front page of the Barack H. Obama website. And, the IRS gave this group preferential treatment over American conservative and pro-Constitutional groups.

Barack Obama welcomed his militant Muslim brother Malik Obama to the White House after his inauguration. 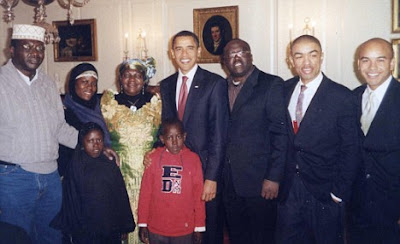 Proud family: US President Barack Obama greets members of his British and African-based family at the White House following his inauguration, including half-brother Abongo, far left, and stepmother Kezia, in yellow. The President’s 86-year-old paternal grandmother Sarah was also in Washington DC for his swearing-in ceremony, as well as his half-sister Auma, 49, and half-brothers Ben, 38, and Abo (or Samson), 40.

You just can’t make this stuff up.

“But the ruling elite always give such favors” will the thinking (if there is any) of the Obama team when they hear of the latest scandal.

I remember reading that the IRS even backdated his approval for a couple of years.

Let’s not kid ourselves for one second. The IRS is involved in a criminal conspiracy to aid and abet money laundering through the granting of tax-exempt charitable organization status to the bamster’s crooked relatives as a political favor. In a sane world the WH would be shut down tonight under RICO laws and perp-walked to awaiting vans for booking and arraignment.

What a piece of work that guy is!

Yeah, like a half-brother named “Abongo.” I know I'm not politically correct when I say this sounds like the cannibal chieftain (with a bone in his nose) in an RKO Tarzan movie.

For the love of God, how can anyone not see who Obama is and what he’s been installed to do? The American people have been frontally lobotomized and common sense is gone. Obama was not qualified even to run for public office of any sort, not even to sweep the floor.

My God, does the scandal of this man ever end? Really, what the Hell else is he into? What a historic and world class scoundrel we’ve elected — TWICE!

That's just Malik letting his arab side hang out. There's someone in the WH who's going to seriously wish he hadn't lied and said this Kenyan native was his brother.

His family tree has roots in Perdition..

Obama was not qualified even to run for public office of any sort, not even to sweep the floor.

May God have mercy on the United States.

My God, does the scandal of this man ever end? Really, what the Hell else is he into?

We’ve only seen the tip of the iceberg.

Don’t even bother applying. We’ll just give you what you need.

This is abuse of the law.

I pray that the last act of this tragic drama isn’t Americans saying they didn’t know what was happening all around them. Everyone knows. Some just are too embarrassed to admit to themselves that know they’re being ruled by an evil man.

I pray that the last act of this tragic drama isn’t Americans saying they didn’t know what was happening all around them. Everyone knows. Some just are too embarrassed to admit to themselves that know they’re being ruled by an evil man.

I agree. But I’m very afraid that the United States is going to suffer greatly before people come to their senses.

The nation turned it’s back on Him and now He is going to tell us to fend for ourselves.

Thank God our time here is so short.