Washington DC - -(Ammoland.com)-Magpul Industries donated 20,000 so called “high capacity” magazines to a June 29 2013 gun rights rally in Glendale, CO, for the purpose of raising money for the recall of state Sens. John Morse and Angela Giron–two Democrats who both supported the gun control measures that become law on July 1 2013.

The Denver Post reported that the rally was sponsored by Free Colorado, “a nonprofit group that advocates for firearms rights.”

Denver-based Magpul makes 30-round magazines for AR-15 rifles, and the company made news in early March by promising to take its$85 million in annual profit and leave Colorado if the gun control laws were passed.

Now that the laws are in effect, Magpul is openly shopping for a state to which it can relocate, but is doing what it can to help recall Democrats who supported gun control in the meantime.

At the June 29 2013 rally, that meant giving away 30-round magazines to the first 1,500 people over 18 years old in attendance and donating another 18,500 magazines to be sold at a discount price to raise money for the recall of Morse and Giron.

The magazines Magpul gave away and sold on June 29 are no longer available under the ban that took effect today July 1 2013.

They make a very good magazine.

2 posted on 07/01/2013 7:14:52 PM PDT by Washi (PUSH BACK! Encourage your legislators to introduce pro-second amendment legislation.)
[ Post Reply | Private Reply | To 1 | View Replies]
To: Washi
I used to use whatever I could get my hands on, except the cheap government issue mags with the light green follower. (They really suck)

Not any more! At home and work I'm carrying Magpul. 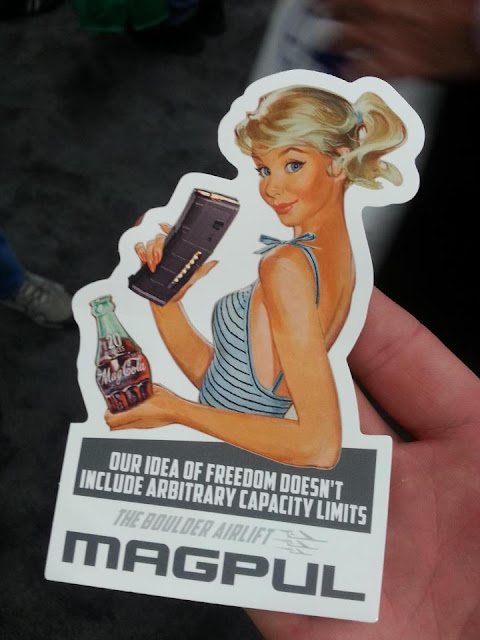 Voting with our dollars between elections is the most important thing a real conservative patriot can do IMO.

I take the time to research where a product is made, what the companies politics are and who they support. What state profits from the companies taxes , employees etc ... Their past record versus any future promises is key for me also before i make a decision to spend a dollar if at all possible.

Magpul move their manufacturing base out of Colorado yet ?

They are on their way. Sounds like they are moving in stages.

Thanks for the information...