The center of main regional city of Donetsk echoed with sound of artillery blasts coming from north and east. "The situation inside the city is tense and powerful artillery fire heard… but we have no immediate information about casualties and damages."

Separatist gains against Kiev government forces in eastern Ukraine, particularly a rebel advance on Debaltseve to the northeast of Donetsk, have given impetus to a Franco-German initiative to try to end the Ukrainian crisis.

MOSCOW SAYS HERE IS NO PROOF OF ARMED INVOLVEMENT BY RUSSIAN FORCES.

The present battlefield is the town of Debaltseve, a vital rail and road junction lies in pocket between two separatist-controlled regions.

Ukrainian government forces express confidence they have enough firepower to hold the town even though rebels steadily encroach in surrounding towns and villages.

Reuters correspondent in Debaltseve Friday said Ukrainian forces kept up steady barrage of mortar or howitzer fire from the town even while evacuating civilians.

Another concern for Ukraine is Mariupol, between rebel-controlled areas and the Crimean peninsula, which was annexed by Russia last March.

"The Russian terrorist forces are gathering strength for further offensives on Mariupol and Debaltseve. An increase in tanks and armored vehicles in Debaltseve ... noticed," he said.

"We know the way in and out and whoever else steps in here will go with a big blast," said a rebel commander. 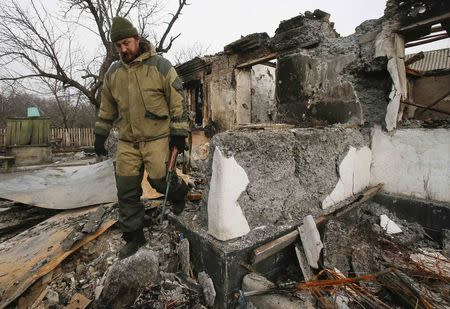 A member of a rebel unit of the self-proclaimed separatist Donetsk People Republic walks past a house destroyed by shelling in Olenivka
1 posted on 02/07/2015 12:20:11 PM PST by UMCRevMom@aol.com
[ Post Reply | Private Reply | View Replies]
To: UMCRevMom@aol.com

**** I am required to excerpt article from Reuters. I summarize & eliminate little as possible. More detail at URL link

What I don’t get is, why would people even want to leave Ukraine and fight WITH Russia? Even Russian ethnic people should realize that Putin is going to lead them down the drain, like most autocrats do. In that part of Georgia that Putin seized a few years ago, I strongly doubt everybody wakes up every day glad that they parted from Georgia, and relieved to be under Putin’s thumb.

We need to join with Russia, not oppose them. Look who we are both up against, China and Islam.

Some people are exciting Ukraine because roads are under fire, then traveling south to re-enter Ukraine to stay with relatives. The Crimeans that went to Russa were transported to Siberia

Please excuse typo above.. not “EXCITING.. but EXITING”

Russia is no bed of roses, but Ukraine is a basket case on the verge of economic and demographic collapse. Its near term viability is uncertain. As in all wars, the ordinary people are mere pawns.

8 posted on 02/07/2015 12:58:50 PM PST by GeronL
[ Post Reply | Private Reply | To 1 | View Replies]
To: married21
This narrative is much longer Brief summary: The history is this: Yanukovych's inauguration on 20 February 2010, the legitimacy of the election was questioned by many Ukrainians, international organizations, and foreign governments with allegations of electoral fraud. [Supreme Court later found election corrupted in East Ukraine] Last Nov, the was a peaceful protest [Maidan, Kiev] because Yanukovych went back on his word to allow Ukraine to have an associated relationship with EU. When he discovered in Feb 2014 that he would be charged with "Crimes against humanity" in the Hague, he escaped in the night to Moscow. The Ukrainians then replaced him with an acting President. They discovered multiple documents that had been attempted to first be destroyed by fire then could in the man-made lake. These documents are still being studied, but it had been determined that Putin had been infiltrating & corrupting government, military, and police. Putin also had planing invasion of Ukraine. Yanukovych had became VERY wealthy using off shore accounts as well as stashing gold. [See: http://www.theguardian.com/world/video/2014/feb/24/ukraine-president-viktor-yanukovych-palace-video] Also, had zoo, casino in 'pirate ship' on man-made lake] with He tried to bribe (carried $60 million) his way our of he country for his escape at the airport but was denied. [Eventually, I understand he used a helicopter.] However, the problem remains of removing these corrupt communist plants from their positions. [Parliament election occured last Fall.] Those without internet in East Ukraine were subject to 24/7 media propaganda from Russia. Yet, the farmers & miners strongly support a united Ukraine. Others support, but it is like being a Republican in NYC or Detroit... quietly!) Now, however, this is radically changing as people are experiencing the truth. EXAMPLE: Last March, Residents of Donetsk region appealed to the Acting President of Ukraine Oleksandr Turchynov asking to protect them from the separatists and bring the situation in the region under its control. This is stated in an open letter, published Donetsk media. "We, the residents of Donetsk region, deeply concerned about the situation created by the activities of criminal organizations in the anti-Ukrainian Donetsk and region. Since the beginning of March this year, in the center of Donetsk regularly continue to aggressively minded people gather under the flag of the Russian Federation, who cynically and with impunity, to the eyes of the inhabitants of the city, committing criminal acts: openly call for separatism, seize administrative buildings, beaten and humiliated residents claiming pro-Ukrainian position, openly mock the state symbols of Ukraine, block the message and work of public transport, ports and destroying property, which shows or installed Ukrainian symbols"- the statement says. The letter reminded that many people in the region affected, and at least one person was killed and open support for the integrity of Ukraine at a meeting March 13, 2014." Over the last month have been repeatedly attacked by members interfaith prayer marathon within the "Pray for Ukraїnu" for wearing a Ukrainian flag were beaten by pro-Ukrainian activists, as well as members of the bike ride in support of the integrity of Ukraine," - said the representative of the community. Bottomline: GOOD GUYS: Ukrainians that fight for the physical, moral and political integrity of their country. BAD GUYS: DNRs [self-proclaimed Donetsk People’s Republic] and LNR [self-proclaimed Lugansk People’s Republic] The Russian Communist saboteurs, Separatists, Drug/alcoholic city thugs paid mercenaries, the Cossack mercenaries.. BTW, Ukraine is seeking offical U. N. TERRORIST status recognition for DNR & LNR: "We also call on the international community to respond resolutely to the crimes of terrorists, increase all forms of pressure on those who sponsor and support them. Our position remains constant – the so-called “DNR” and “LNR” must be recognized as terrorist organizations." http://un.mfa.gov.ua/en/press-center/news/32625-brifing-jurija-sergejeva-dlya-zhurnalistsykogo-korpusu-oon-anglmovoju
9 posted on 02/07/2015 1:17:11 PM PST by UMCRevMom@aol.com
[ Post Reply | Private Reply | To 3 | View Replies]
To: CMB_polarization

China is a Russian ally, and Iran is an ally of Russia as well.

China, Russia and Iran are our enemies.

With the usurper cutting our military, we won't stand much of a chance in WWIII. But that seems to be the plan.

12 posted on 02/07/2015 2:20:10 PM PST by bgill (CDC site, "we still do not know exactly how people are infected with Ebola")
[ Post Reply | Private Reply | To 10 | View Replies]
To: UMCRevMom@aol.com
The Europeans and Americans will not lift a finger to support Ukrainian territorial sovereignty, however both are doing everything they can to destroy Israeli territorial sovereignty. What a crazy world we live in!

Is oil the root cause of Europe and America's delusion?

The fighting in East Ukraine is not a civil war. Very few actual locals are fighting for Russia there. Russian side is mercenaries, Russian “jihadists” (who want to conquer Eurasia to be ruled by Russia) and sometimes their regular army. These are not reasonable people. 90% of Russians get their view of the world from TV and all the TV channels are directly controlled from Kremlin. They don’t have an adequate picture of the world.

Putin is a misguided Russian, and carryover from the Soviet Union. I hope someone better may be found to lead that country.