Clashes between government troops and rebels intensified in southeast Ukraine, undermining a cease-fire as the country's government vowed to prevent an "oligarch- supported political crisis."

Prime Minister Arseniy Yatsenyuk said his government would crack down on "total corruption and smuggling," and the Cabinet gave private security services 24 hours to disarm after a group of men seized state-controlled oil company Ukrnafta.

"A scenario of oligarch-supported political crisis will not pass," Yatsenyuk, who dismissed the first deputy head of the fiscal service in charge of the tax police and the deputy head of the customs service on Monday, said during a government meeting. "We will not let anyone rob the country , which is at war."

Following his comments, four lawmakers in President Petro Poroshenko's party left the parliamentary faction, saying that discrediting the regional administration was a violation of the ruling coalition pact,

It fits NONE of the memes they have been pushing about Ukraine for over a year now, so they are likely waiting to see how this all falls out.

Amid allegations going back and forth between Kiev’s “rulers” of massive corruptions in all directions. Igor Kolomoiski’s hand-picked Chairman of the company that controls Ukraine’s pipelines (where Hunter Biden “works”)was called out for Corruption, fired, and replaced.

He barricaded himself in the office, refusing to leave, until some armed men showed up to “Escort” the new, Poroshenko “Party” Chairman into his office.

Claiming that his guy had been kicked out by “Russian Agents”, Kolomoiski showed up with several heavily-armed men and took back control of the company, by force.

He grabbed a bunch of documents, saying he “intended to get to the bottom of this”. (of course, we will NEVER see those incriminating docs again).

Sergei Leshchenko, an MP from the Petro Poroshenko Bloc posted in his account on Facebook that Kolomoiski, the unelected “Governor” of the Dnepropetrovsk region, and one of Ukraine’s richest oligarchs, arrived at the site accompanied by armed men to stand up for his guy, Lazorko.

Leshchenko explained why the oligarch was so quick to rush to Kiev. Lazorko had “paid hundreds of millions of hryvnias to Kolomoisky for storing crude poured from the pipelines.” he said.

The next day, Kolomoisky showed up with a LARGE group of Mercenaries, barricaded himself inside, while building meteal fences all around the building.

Poroshenko has sent some of the “Volunteer Guard” into Dnepropetrovsk to pressure his allies, while Reports say that one of Kolomoisky’s mercenary “Donbas” Battalions left the front lines last night, weapons in hand, and are heading to Kiev.

Within the last few hours, Tweets are saying that the Interior Ministry has kicked Kolomoisky’s troops out of Odessa, as well.

New “Ukraine”, same as the old Ukraine.
Incredibly corrupt.
And now, the U.S. Taxpayer is DIRECTLY funding this crap.

There is definitely something major going on, and Russia Media is speculating about a whole bunch of stuff, but facts on the ground in Kiev have suddenly gotten hard to find. 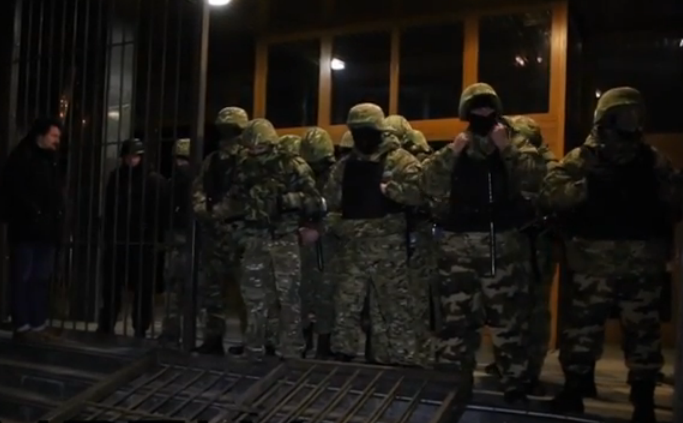 Another overview, from a Pro-Russian Blog:

It happened. The junta finally split into two camps. Benny yesterday went all in. Poroshenko accepted the game. Today was very eventful.

1. Nalyvaychenko accused the circle of Kolomoisky of involvement in the murder of SBU captain.

2. Poroshenko ordered to disarm all armed guards near the office of “Ukrnafta”.

3. Continuing the theme, Poroshenko said:
“Territorial defense will obey the clear military vertical of power and no Governor will be allowed to have his own pocket UAF (armed forces of Ukraine).

4. In response to this four deputies withdrew from the faction of PPB (Peter Porosjhenko Bloc): Korban, Liynyl, Filatov, Denisenko and made a statement:

Peter Poroshenko has decided to implement one of the decisions of the secret protocol of the Minsk agreements. In it was the item on the destruction of the “Right Sector”.

“I hope it’s not true. But there are doubts, based on the reaction and persecution,” - said the deputy governor of Dnepropetrovsk, Gennady Korban, stressing that “against him there are 8 criminal cases, and none against the deputies of the Opposition bloc”.

“Putin broke his teeth on Dnepropetrovsk region, Poroshenko will break them too. I’m out of the party. We invite all to the new veche (popular assembly) on Wednesday at 18:00 on the square of Heroes of Maidan. Petro Poroshenko has no relation to the revolution of dignity. He is afraid of the third maidan, but actually the second revolution is not over yet”.

5. A complete list of claims to the authorities was announced by Deputy Kupriy.

The Kiev regime has long been going towards this split. At the end of last year only the US intervening in oligarchic quarrels was able to keep the imaginary unity of the Maidan. But today even they were powerless (or vice versa - managing the process of demolition of the junta).

The question of autocracy is relevant to any power: whether it’s the junta, or whether it’s LDNR. LDNR was dealing with issues of autocracy since the fall. Mostly successfully, but there are problems. Now Poroshenko decided to deal with this problem.

Kolomoisky, who is unwelcome on the ship of power, is not just going to go away. Against him is the state apparatus. But he is not what he was a year ago. Plus the popularity of Poroshenko is moving towards zero. People are tired of war and all that is connected with it (death, poverty, lack of prospects). The army is tired of constant betrayals, which are associated with military leaders loyal to the President.

Thus Kolomoisky has a chance. He went for an open rebellion against Kiev. His trumps are the Right Sector and other “volunteers”, whom Kiev sentenced to slaughter, and PrivatBank, which can crash the finances of Ukraine.

In any case, the dice is cast.

Any coup lives by its own laws. It must escalate. Anyone who will slack and backs off, will be swept away and crushed. The coming days will clarify who is better prepared to fight.

P. S. This battle could have happened in November-December, February, but each time the puppeteers delayed it. Apparently now is the time. It is important that the initiator is Poroshenko. Kolomoisky actually is only defending himself. Benya [Kolomoisky] cancelled his coup in February (on the order from Washington).

I support Ted Cruz in regards to sending weapons to Ukraine.

I oppose Obama’s weakness in the face of the Russian invasion.

Go Ted Cruz!!!
“Sen. Ted Cruz slammed the Obama administration’s approach to the Ukraine crisis, saying the White House should take a more aggressive role to shore up the nation’s defenses against Russia.

The Texas Republican said the strategy employed by the United States and Germany “makes no sense, and it isn’t working. It is long past time for us to step forward and provide defensive weapons.””

I agree with a stronger stance toward Russia, I disagree with sending weapons to this farce of an Obama-sponsored coup in Ukraine.

Remember, this is more than just about Ukraine, it is about Syria, as well.

This is about Ukraine, so you lean closer to Cruz or Obama on Ukraine?

It was a simple question to answer, I believe that you actually think that even Obama is being too hawkish when it comes to Russia.

Sounds like the Ukie junta is starting to eat itself up.