Canadian Terrestrial Energy has formed an alliance with Dalton Nuclear Institute at the University of Manchester in UK to develop its Integral Molten Salt Reactor (IMSR).

The firm intends to accelerate work on the development in order to make it ready for the construction and licensing phase, which has been scheduled for early 2017. 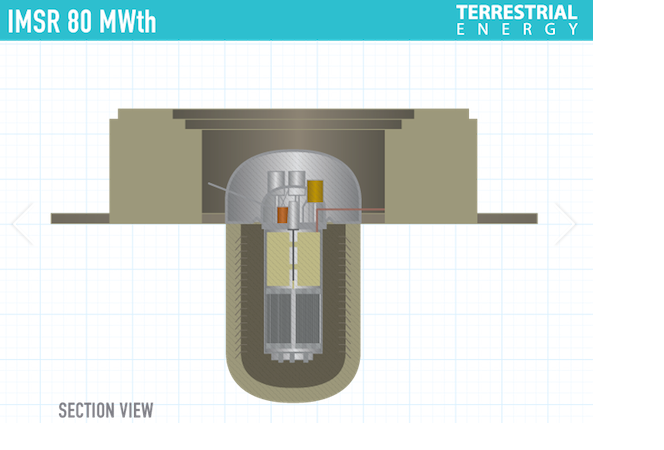 Molten salt reactors (MSRs) use fuel dissolved in a molten fluoride or chloride salt. As an MSR fuel salt is a liquid, it functions as both the fuel (producing the heat) and the coolant (transporting the heat away and ultimately to the power plant).  This means that such a reactor could not suffer from a loss of coolant leading to a meltdown. The basic technology is not new - it was first demonstrated at ORNL in the 1960s, where a 7.4 Wt test reactor, the Molten Salt Reactor Experiment (MSRE), operated from 1965 to 1969.

Terrestrial Energy's standout feature over other MSR projects active today, Irish said, is that it already has a reactor design specified to a recognised industrial level, putting the company in a strong market position. All of Terrestrial Energy's decisions are to simplify and speed a commercial molten salt reactor to market. They will still have a reactor that will greatly lower the costs and have improved efficiency over todays pressure water and boiler water nuclear reactors. 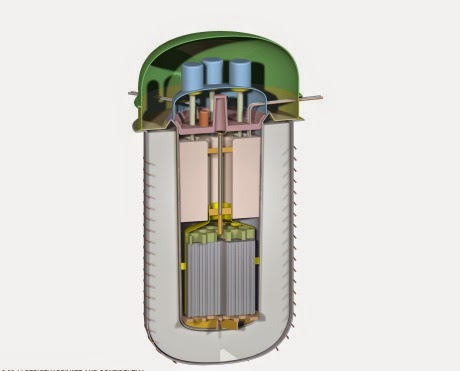 The small modular design integrates primary reactor components in a sealed and replaceable core vessel that has a projected life of seven years. The IMSR will operate at approximately 700°C, which can support many industrial process heat applications, and Terrestrial intends to offer models ranging from 80 to 600 MWt, which it says would be ideally suited for remote communities and industrial operations.

Terrestrial Energy Inc. ("TEI" or the "Company") announces that it has entered into a Letter of Intent for services with Canadian Nuclear Laboratories, based in Ontario, Canada. This arrangement includes research and development work that is required to bring the company's Integral Molten Salt Reactor (IMSR) to the engineering blueprint stage, expected in late 2016.

Terrestrial Energy Inc. ("TEI") has the objective of beginning commercial deployment of its proprietary Molten Salt Reactor technology by early next decade. Molten Salt Reactor technology represents a revolution in nuclear safety, waste and proliferation resistance, and in energy cost-competitiveness. TEI's Integral Molten Salt Reactor (IMSR) is a small modular design, with models ranging from 80 MWth to 600 MWth - ideally suited for remote communities and industrial operations, including on- and off-grid power provision. Canada provides a favorable jurisdiction for the company's Molten Salt Reactor development, licensing and marketing. TEI's board consists of executives from the nuclear, natural resources and finance sectors.

Terrestrial Energy’s IMSR (Integral Molten Salt Reactor) features a self-contained reactor Core-unit, (the “IMSR Core-unit”), within which all key components are permanently sealed for its operating lifetime. At the end of its 7-year design life, the IMSR Core-unit is shut down and left to cool. At the same time, power is switched to a new IMSR Core-unit, installed a short time before in an adjacent silo within the facility. Once sufficiently cool, the spent IMSR Core-unit is removed and prepared for long-term storage, a process similar to existing industry protocols for long-term nuclear waste containment. Owing to the extremely low costs of the IMSR Core-unit, it is commercially feasible to operate the IMSR facility in this manner. The sealed nature of the IMSR Core-unit has other benefits, such as permitting operational safety and simplicity.

I have covered how the costs for the IMSR reactor could eventually provide energy at less than 1 cent per kilowatt hour.

Molten Salt Reactors (“MSRs”) are nuclear reactors that use a fluid fuel in the form of a molten fluoride or chloride salt. This is a fundamentally different approach compared to conventional nuclear systems that use solid fuel. A liquid fuel offers unique advantages not enjoyed by reactors that use solid fuel. As an MSR fuel salt is a liquid, it functions as both the fuel (producing the heat) and the coolant (transporting the heat away and ultimately to the power plant). This represents a revolutionary paradigm in nuclear reactor safety: a reactor that cannot lose coolant and cannot melt down, a reactor with a completely fresh narrative on civilian nuclear safety.

The safety profile-engineering complexity-capital cost relationship is completely different for the Integral Molten Salt Reactor. The IMSR has completely different economies of scale, owing to the fact that it is an entirely different reactor system. This is commercially very significant. The IMSR can be built small and modular, yet remain highly cost competitive. The IMSR first-of-a-kind reactors will be constructed in a variety of power outputs, from the very small, 30 MegaWatts-Electrical (MWe) or smaller, up to 300 MWe and larger still. IMSRs can also be arrayed in a multi-unit facility for greater output if necessary. IMSRs are modular and designed to have very small land footprints. The IMSR can be manufactured with material readily available in today’s industrial supply chains, with methods common in modern factory production and in high unit volume. The IMSR can be shipped to a power plant located at point-of-demand via flatbed truck or rail car. The IMSR is fuelled with uranium, a terrestrial source of energy with a density many times greater than the expensive combustion energy of fossil fuels. The IMSR unit is scalable, its production is scalable, its industrial use is scalable — scalable to displace coal. 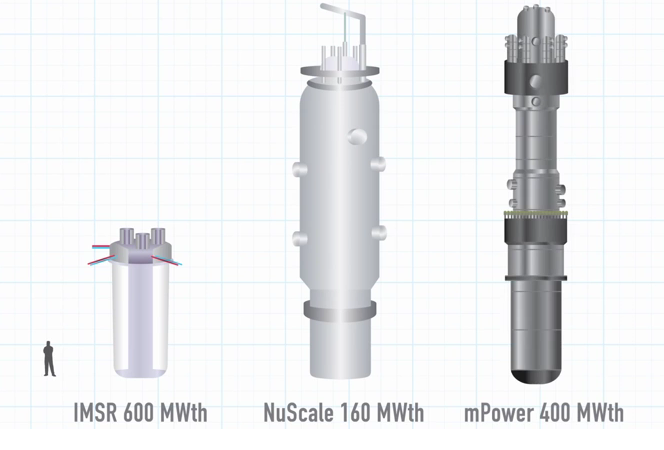 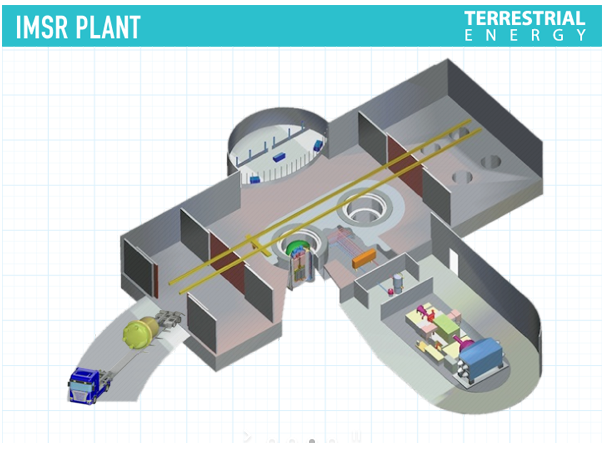 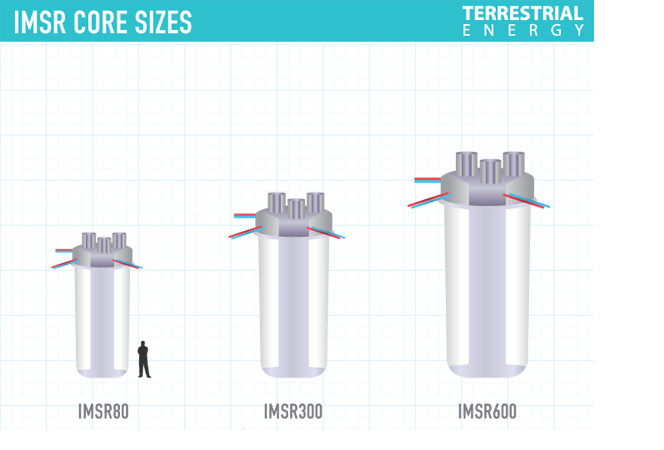 When nuclear fuels “burn”, they release thermal energy and fission products are created. When fossil fuels burn, they release thermal energy, and CO2 and water are created. The fission products are the real waste from fission energy, as CO2 waste is to fossil fuel combustion. Fission products must be removed or the fission reaction will stop, just as CO2 must be vented from a car engine or the engine will stop. When fossil fuels are burned inefficiently, they create toxic by-products, which are, partially burned fuel. The same is true of a nuclear reactor system. When fission nuclear fuels such as uranium are burned inefficiently they create plutonium. However, if a reactor system can remove the fission products, it can burn its fuel far move efficiently and potentially leave no plutonium. This scenario is not possible for the solid fuelled reactor systems of Conventional Nuclear, as the fission products are trapped in the fuel by design. For Conventional Nuclear reactor systems fuel and waste efficiency can only be achieved by the centralized reprocessing of the waste fuel. Reprocessing of solid fuel waste to create new solid fuel is very difficult, both technically and commercially. For these reasons, waste reprocessing has limited use today despite the issues of plutonium waste. Furthermore, in practice, solid fuel waste can only be partially recycled; only a partial improvement in efficiency for all that complexity, effort and cost.
This is not the case with the IMSR using a liquid fuel. Firstly the IMSR allows many fission products to be removed continuously and in-situ. They simply vent from the salt and are captured by the IMSR. Hence, even without any reprocessing of waste IMSR liquid fuel, the IMSR is far more efficient, like a well-tuned engine. In fact, the IMSR is six times as efficient as a Conventional Nuclear reactor – an IMSR power station is expected to leave less 1/3rd less fission product waste and far less plutonium waste.

While the basic IMSR cannot remove all fission products and leave zero plutonium, there are processes under development that can be added to the basic IMSR to allow the achievement of near zero waste. IMSR liquid fuel recycling can be done centrally or in-situ i.e. “on-line”, and both methods can achieve a near zero plutonium waste profile for the IMSR. In this key respect, the IMSR represents a completely new waste paradigm for civilian nuclear power – nuclear power without plutonium waste. The commercial vision is only possible because the IMSR uses a liquid fuel, and chemical reprocessing of waste IMSR liquid fuel into new IMSR liquid fuel is far easier than chemical processing of waste solid fuel into new solid fuel. Terrestrial Energy believes that both online and centralized reprocessing of IMSR waste fuel are highly viable and will become standard for the next generation of IMSR power plants, possibly by the end of the next decade. This future does not exist for Conventional Nuclear using solid fuel.

Other MSR development programs, including the extensive original U.S. program from the 1950s to 1970s, are generally focused on two key objectives: i) to use thorium-based fuels, and; ii) to “breed” fuel in an MSR-Breeder reactor. Terrestrial Energy intentionally avoids these two objectives, and their additional technical and regulatory complexities, for the following reasons.

It is the design of the IMSR itself that achieves exceptional fuel efficiency and a much reduced waste profile, and not the fuel. Consequently there is little or no benefit to utilizing a thorium fuel cycle in an MSR. The IMSR will use Low Enriched Uranium, or Slightly Enriched Uranium, each of which are broadly available, and have a long regulatory history and long-established supply chain. The only difference is that the fuel will be in a liquid form and not solid, meaning that far less fabrication will be required. Uranium fuel is licensed, it is in common use, its fuel cycle is widely understood, and it can be supplied as fuel through an existing industrial chain.

The breeding of fuel creates substantial regulatory hurdles, as well as substantial technology hurdles, leading to substantial additional research and development costs. All of this is unnecessary if a reactor is a simple burner. The only reason to breed nuclear fuel is if there is a concern that fuel supplies are scarce and declining. Uranium is geologically abundant and available in quantities sufficient to supply the world’s power needs for centuries. There is no commercial case for breeding, and to attempt to do so creates unnecessary regulation, costs and delays.

This isn’t the only cutting edge design that revolutionizes nuclear. Some use thorium or depleted uranium, essentially infinite supplies.

Can I build one to power up my house?

agree. there’s a bunch of designs. the usa has a couple companies working on this including flibe, martingale,terrapower,transatomic plus a number of universities who have announced thorium related programs.

I don’t know the wisdom of using uranium in highly reactive salts. Any contact with water will boil off some of the salt and its dissolved uranium.

This looks great, I was not aware of this effort. Nuclear is the one way to satisfy the anti-coal crowd while achieving a better future. It is key that this could be built in just a few years.

It’s sad this is a Canadian effort, I hope Flibe and others can keep the U.S. in the game.

What’s kept these types of reactors from being commercialized already?