It used to be that the gun grabbers desperately attempted to keep a thin veneer of plausible deniability on their ultimate goal of Confiscation. After all, you canâ€™t very well sucker people into the government controlling their private property with Intergalactic Background Checks and registration if itâ€™s known that those are but a pretext for confiscation later on.

But now out of frustration at the lack of â€˜progressâ€™ in destroying out rights they have dropped the mask and are now calling for full on repeal of the second amendment, gun bans and outright confiscation. To be sure they still try to pretend this is not the case and hence the reason for this reference piece.

The purpose here is to document the myriad times them have called for gun confiscation so that when they turn around and LIE about it, We have the FACTS to prove they are Lying.

Such as in this case: Obama Mocks Gun Owners http://nation.foxnews.com/president-obama/2013/04/04/obama-mocks-gun-owners

For example, Comrade Clinton recently called for the government to make people an offer they canâ€™t refuse-turn over their means of self-defense in exchange for their own money OR spend some time in the pokey.

In response to an inquiry about Australian gun confiscation, she responded that:
â€œIn the Australian example, as I recall, that was a buyback programâ€¦â€¦. I think it would be worth considering doing it on the national levelâ€ Hillary Clinton October 16 2015 http://www.c-span.org/video/?328774-1/hillary-clinton-town-hall-meeting-keene-new-hampshire

And as typical, she has tried to deny the obvious, but the words and articles from her Comrades on the national Socialist left make it clear that Confiscation is their ultimate goal. Their subsequent lies on the subject are condemned by their own words.

This will be a list of calls for repeal of the 2nd amendment, gun bans and Confiscation in more or less in chronological order, most will be links only to save space and restrictions.
I would ask that you try to just post links and excerpts to this thread such that is a good resource for FR, when the #nationalSocialistLeft trots out their â€˜No one is talking about Confiscating gunsâ€™ LIE. Please read through the links and references and check them out for viability and accuracy. And if you think some I have missed, please list them here for everyone else's use.

Examining the list you will see the trends over the past few years. It began with the left wanting the â€œAssault Weaponâ€ scam and registration. Then it transitioned to advocacy for the repeal of the 2nd amendment and followed recently with outright calls for confiscation.

Item one has a â€˜moderateâ€™ thrust with the â€˜generousâ€™ granting of the rights we free citizens have to possess a gun under their conditions (Isnâ€™t that really nice of them?)

â€œIf I could have gotten 51 votes in the Senate of the United States, for an outright ban, picking up [every gun]â€¦..Mr. and Mrs. America, turn â€˜em all in.â€
http://www.youtube.com/watch?v=V-b45FdDN3s&feature=player_detailpage

Then of course the Sandy Hook terrorist attack took place and things changed overnight. Consider the context of that time. Obama had just stolen a second term in office and the national Socialist left was all aglow in their supposed preeminence over the forces of Freedom and Liberty. Shortly thereafter that attack took place and the national Socialist Left took this on as a sign that their moment had arrived and that this â€˜Horrificâ€™ attack would be THE moment to finally vanquish the peopleâ€™s common sense civil right to armed self-defense.

In some cases the nationâ€™s socialists went hog wild and indulged all their totalitarian fantasies:

How to Ban Guns: A step by step, long term process
The very first thing we need is national registry. We need to know where the guns are, and who has them.
Along with this, make private sales illegal.
We want to encourage as much voluntary compliance as possible.
So, we get those logbooks, and cross reference the names and addresses with the new national registry.
This exercise isnâ€™t so much to track down every gun ever sold; the main idea would be to profile and investigate people that may not have registered their guns.
Iâ€™m concerned that other guy who bought a half dozen assault weapons, registered two hunting rifles, and belongs to the NRA/GOA. Heâ€™s the guy who warrants a raid.

So registration is the first step. Now that the vast majority are registered, we can do what we will.
http://www.dailykos.com/story/2012/12/21/1172661/-How-to-Ban-Guns-A-step-by-step-long-term-process

Then the trend drifted over to one of repealing the 2nd amendment for awhile.

Then in the past year or so the talk verged more into the realm of outright Confiscation [or itâ€™s innocuous sounding euphemisms: ban, Gun buyback, etc.]

â€œA couple of decades ago, Australia had a mass shooting similar to Columbine or Newtown. And Australia just said, well, thatâ€™s it - weâ€™re not seeing that again. And basically imposed very severe, tough gun laws.â€
https://www.whitehouse.gov/the-press-office/2014/06/10/remarks-president-qa-david-karp-ceo-tumblr

â€œWe know that other countries, in response to one mass shooting, have been able to craft laws that almost eliminate mass shootings. Friends of ours, allies of ours - Great Britain, Australia, countries like ours.â€
https://www.whitehouse.gov/the-press-office/2015/10/01/statement-president-shootings-umpqua-community-college-roseburg-oregon

December 2014
Time is overdue to repeal the Second Amendment
http://www.wisconsingazette.com/opinion/time-is-overdue-to-repeal-the-second-amendmentr.html

And here we have another case of the indulging in their most lurid of statist fantasies:
Effective Gun Control - A National Semi-Auto Ban
Act I Step 1:
The POTUS issues a EO, commanding the BATFE to â€œaudit dealer recordâ€ - ie, look for â€œstrawman salesâ€ by reviewing each of the dealers Form 4473 records.
So, now we have ALL the records scanned... and a comprehensive list of who purchased what gun where.
Act II Step 1:
Strike a deal with the Republicans. For public consumption, word it as ambiguously as possible... as was the ACA (just pass it and weâ€™ll find out what's in it) and stuff it into the next Continuing Resolution.
Step 2: Federalize (â€œsecondâ€) the National Guard of the respective states.
Step 3: Go door-to-door with your list of gun purchasers, and get access to the guns.
No gun? Where is it? Who has it? Whereâ€™s the paperwork? No gun, no paperwork?
Sadly, it appears the nationwide cell phone network is down, unless youâ€™re using a government contract cell phone. Yes, surprise is key.
http://www.dailykos.com/story/2015/10/5/1427845/-Effective-Gun-Control-A-National-Semi-Auto-Ban

November 2015
Yes, They Want to Take Your Guns Away The Daily Beast
http://www.thedailybeast.com/articles/2015/11/02/yes-they-want-to-take-your-guns-away.html

Itâ€™s Time to Ban Guns. Yes, All of Them New Republic
https://newrepublic.com/article/125498/its-time-ban-guns-yes-them

So when anyone of the national Socialist Left tries to claim that â€˜No one is talking Confiscationâ€™ show them this list.

The Fascists want to take all of our guns, disarm us, and then do as they please without any fear of retribution. Democrats are the new Fascists 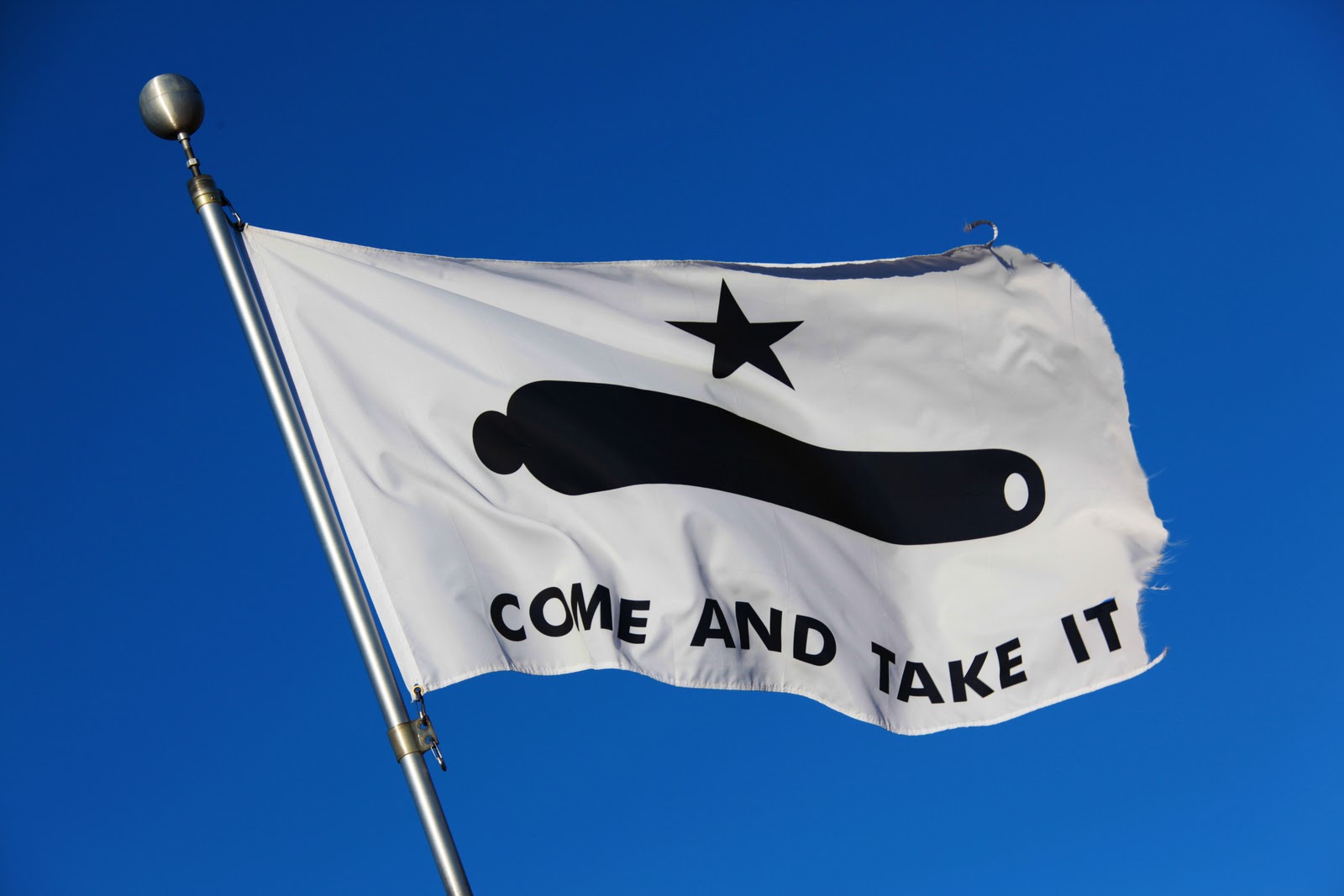 Great list! Their open talk of using fallout from Fast and Furious as a false flag to trap US gun owners was all I needed.

History has shown the ‘progression’ to be Registration, Confiscation, Annihilation.

The national socialist left has already been clear on the first two...

It’s my opinion that, under these EOs, any senior citizen who becomes ill, has to have a hospital stay or take pain medication, have home healthcare or who have a Power of Attorney Order so that their children can help them with business matters, etc., will also have their rights to protect themselves taken away. Since there are no definitions provided(as usual) any of the above reasons or just about any the Regime cares to state, will be justification. And any senior citizen who lives in government subsidized housing might just as well resign themselves to being corralled in one of those sitting duck, gun free zones.

I’ve had enough attacks on my rights just because of my age. Bullies and tyrants always pick off the weakest first.

Sorry about all the Ã¢â‚¬â„¢ in the text - I did what could to try and keep them out and still have it formatted for easy reference.

What is your plan?

If you could be so kind, Please share this with everyone you can and check out those references.

And if you find any other examples, please add them to the list.

The gun grabbers have dropped the pretense - they are now openly calling for the confiscation of our property.

So the left that is so terrified of what’s going on in Oregon is willing to multiply that situation by 10 million perhaps (if not many times that)?

I don’t like to broadcast my plan, but it is not a complicit one.

Give them the lead first!

Good question.... now you’re trying to make me think to much for this early in the morn...

1. Stock up on Guns and ammo - have some for use and some to stash away.

2. Spread the word on what the nation’s Socialists intentions using their words.

3. Support Conservative candidates for President. (I know, that stating the bloody obvious...)

There are about 5 Million military and LE.

And there are about 120 Million gun owners.

(With some overlap between the two)
So when the Statists indulge in their tyrannical fantasies it’s just that - they don’t have the numbers.

Thanks for your time and effort assembling this list and posting...

Passed along to every 2nd Amendment advocate I know...

Please do whatever you can to spread the word.