As First Lady, Hillary Did Not Have Security Clearance But Received Classified Information
dailycaller.com ^ | 2/3/2016 | Chuck Ross

When Hillary Clinton was first lady, she did not have a security clearance, but she was "often provided" classified information, she told her longtime friend and ABC News host George Stephanopoulos in a long-forgotten Dec. 30, 2007 interview rediscovered by The Daily Caller.

It was just weeks before the 2008 Iowa caucuses and Clinton was out touting her foreign policy experience, both as a senator from New York and as first lady. She wanted to be seen as the strong and experienced choice in contrast to upstart Barack Obama, then a senator from Illinois.

TOPICS: Crime/Corruption; Government; Politics/Elections
KEYWORDS: 2007; cheats; clinton; hillaryfirstlady; liars; thieves Navigation: use the links below to view more comments.
first 1-20, 21-34 next last
Still weird how those of us who have gone through the process of obtaining some level of security clearance wait for months but someone gets elected and BOOM! You're cleared. Maybe there's a little known clause in extra small print that says the spouse of the (p)resident has clearance by marriage. I don't know.
1 posted on 02/03/2016 8:45:35 AM PST by rktman
[ Post Reply | Private Reply | View Replies]
To: rktman

Isn’t that exactly what Petraeus did?

Because Rodham is politically immune, the abstract action was blameless in her case, therefore none of her confederates can GO TO JAIL. (DO NOT COLLECT $200.)

See. It is not her fault, she just happened to be there when all that secret briefing stuff was disseminated.
Or something.

Hitlary and her staff never did get security clearances. She even joked about how she was able to prevent the clearances from taking place.

A lot of “news” (read: propaganda) coming out these days which “justifies” Hillary’s sloppy and illegal handling of classified material.

“Everybody does it”
“I’ve always done it this way”

They are preparing her Get Out of Jail card and being fairly blatant about it.

I assume Calipha MooseChelle is in a similar position since 2009. 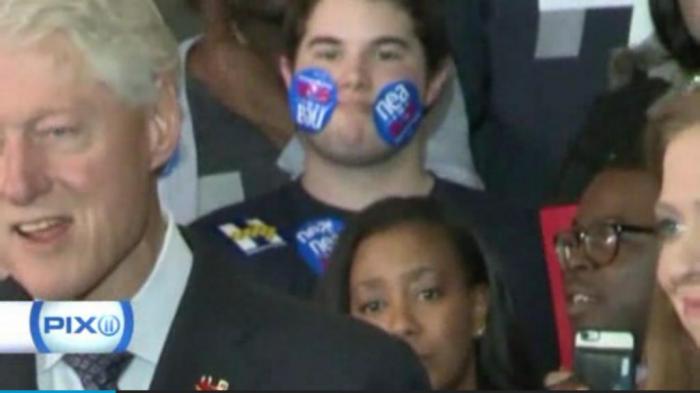 “WE are the President!”

Judge Nepalitano explained that nothing is marked with the word “classified”, because they are marked with other words like “top secret” for example.
It’s a Clinton slippery word use again.

Any congressman approving her stare department appointment who pretends he did not know tgat is corrupt.

Boundaries are not in the lexicon of the Clintonista mafioso. Not because the rules are only for “the little people”, but because they have basically criminal minds.

A bridge too far? Not for them. Bluster and blame and heap scorn upon the challenger, and others will retreat, rather than face that sort of abuse. Plus it is backed up by some rather wealthy plutocrats acting as the “grey eminences”, a person or persons who exercise power or influence in a certain sphere without holding an official position. Remember “Moveon.org”? George Soros?

15 posted on 02/03/2016 9:17:30 AM PST by alloysteel (If I considered the consequences of my actions, I would rarely do anything.)
[ Post Reply | Private Reply | To 4 | View Replies]
To: All
MEMO TO THE FBI There is new evidence surfacing that neither Hillary nor her key staff signed the official State Dept exit form required upon termination of employment.

My gut feeling is the cunning Clintonids didn't sign off b/c that would have cutoff their access to classified and other State Dept info......info the greedy Clintons and their cronies use to cash-in.

The FBI should determine if Huma Abedin, Cheryl Mills, Sid Blumenthal and other Clinton cronies are STILL considered State Dept employees---perhaps as contractors--- and are still receiving classified State Dept mail and cashing US govt paychecks.

REFERENCE Brian Pagliano---billed as Hillary's personal IT--- left her employ then surfaced on the public payroll as a State Dept contractor.

Taxpayers demand to know who else among the Clinton cronies are cashing US govt paychecks. It's an old bureaucratic trick for a politician to hand-pick top aides and put them on the public payroll long after you think they're gone. Who might still be cashing State Dept paychecks?

In light of the $6 billion that went missing from the State Dept's contractor fund when Hillary exited, taxpayers demand to know who is listed as a State Dept contractor....and whether they are receiving classified State Dept info.

16 posted on 02/03/2016 9:23:26 AM PST by Liz (SAFE PLACE? A liberal's mind. Nothing's there. Nothing can penetrate it.)
[ Post Reply | Private Reply | To 6 | View Replies]
To: vrtom
Judge Nepalitano explained that nothing is marked with the word classified
The judge should stick to TV makeup and hair dye - I spent 10 years in the defense industry working with various naval piping and mechanical systems. The drawings that were "classified" were stamped as such in large letters and also said "not releasable to foreign nationals." If you left one sitting out over the weekend, you were fired.
17 posted on 02/03/2016 9:23:46 AM PST by dainbramaged (Get out of my country now)
[ Post Reply | Private Reply | To 11 | View Replies]
To: rktman

“Still weird how those of us who have gone through the process of obtaining some level of security clearance wait for months but someone gets elected and BOOM! You’re cleared.”

I keep wondering who in the Clinton administration was the bagman in the Columbian deal? Recent events reveal billions of our tax dollars (disguised as US foreign aid) were being kept warm in corrupt Columbia......until Clinton felt the coast was clear to have their (cough) charity setup The Clinton Foundation's secret investment fund in Columbia in January 2016. Every aspect of the Bill Clinton presidency must be examined for wrongdoing......recent news reports say the notoriously greedy Clintons used their tax-exempt Clinton Foundation charity to setup a money-making private equity fund in the corrupt country of Columbia.

WIKI REFERENCE---In 2000, the Clinton administration committed $1.3 billion in foreign aid to the corrupt country of Columbia...... and up to five hundred military personnel to train local forces.

An additional three hundred civilian personnel were allowed to assist in the eradication of coca. This aid was an addition to $330 million of previously approved US aid to Colombia. $818 million was earmarked for 2000, with $256 million for 2001.

The Clinton-era appropriations for his Columbia Plan made Colombia the third largest recipient of foreign aid from the United States at the time.

As of 2008, the U.S. has provided nearly $1.3 billion to Colombia through Clinton Plan Colombia nonmilitary aid programs:

ADDENDUM When the Columbian deal surfaced, Bill Clinton hurriedly closed it down....what is he hiding?

According to these links, Huma made the “mistake” of signing her 109 & turning it in.

Cheryl typed in her name - not a signature & of course, Hilligula’s can’t be found.