Ted Cruz held an unscheduled press conference today, the main purpose of which seems to have been to highlight the fact that the Trump campaign has threatened to sue him over ads his campaign is running in South Carolina, highlighting his pro-choice record. Cruz opened the press conference by reading portions of the letter, and declaring that if Trump filed the lawsuit, he would respond with a motion for sanctions. Take a look:

He’s confident he can win, isn’t he? The Candidate.

Cruz will wipe the floor with Trump.

This is like King Kong and Godzilla duking it out.

Ya right, what’s he waiting for then?

It is about time to get it on. Cruz better be careful for what he wishes for.

When? The fact is Ted isn't "wiping the floor with Trump". Instead Ted's committing political suicide of his own volition. And his supporters keep propping him up like El Cid. Amazing to watch.


The irony here is Cruz didn't need to lie. If he had remained honest, he would still be competitive. Liars lie, they can't help it.— Bill Mitchell (@mitchellvii) February 17, 2016


I just find it odd that while the typical Cruz supporter is hyper-religious, they are utterly blind to his constant LYING. It's just weird.— Bill Mitchell (@mitchellvii) February 17, 2016 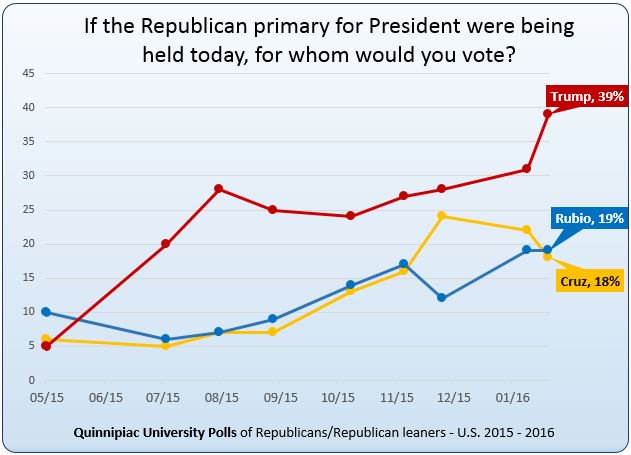 Bring it, Trump! Or are you afraid yet again?

I think we can clearly see now who is the coward in this race. Trump hides behind Twitter so well.

The Twitter president is just what we don’t need.

Over the Amalekites (Trump)
.

In SC? You may be right. We'll see in a few days. And that's fine by me. I supported TC financially early on in his campaign that began at Liberty U.

TC is a fine candidate to win the G.E. His campaign masters have deception honed to an art. Proof is all the Christians who have very little if any discernment and will vote for Rafael Eduardo Cruz thinking his name is Ted and that he is on a religious mission to benefit them.

tronald dump is just a whiney oompa loompa with cotton candy on his head.

What was Trump doing here?

....”And while Jeb Bush’s statement that “the next president should defund Planned Parenthood” falls in line with the rest of the Republican field, his comments about funding for women’s health earned him scorn from Democrats and Trump alike.

“You could take dollar for dollar - although I’m not sure we need half a billion dollars for women’s health issues - but if you took dollar for dollar, there are many extraordinarily fine community health organizations that exist to provide quality care for women on a wide variety of health issues,” Bush said in an interview at the Southern Baptist Forum this month.

When asked if he owes women an apology following his “blood” comments about Fox News host Megyn Kelly, Trump turned the conversation to Bush.

“No, I think Jeb Bush owes women an apology,” Trump said. “He made a terrible statement about women’s health issues. It was a foolish statement, perhaps a stupid statement. It’s a statement that should never have come up and should never have been made and I was shocked that he made it.”

And when it comes to women, Trump said he cherishes them.

“I will be so good to women,” Trump stated. “I cherish women. I will work hard to protect women.”

Trump was capitalizing on the fact that most every MSM news outlet was lying by omission - leaving the last part of Jeb Bush’s remark on the cutting room floor.

“Jeb Bush offered a study in how not to talk about reproductive health on Tuesday. Attack Planned Parenthood? Smart politics for a Republican. Tell an audience, “I’m not sure we need half a billion dollars for women’s health issues”? Not such a great idea.......

Planned Parenthood’s defenders argue that not only is defunding the organization potentially illegal, it’s dangerous.

The rest of Bush’s quote, after the verbal misstep, offers an interesting argument. “Dollar for dollar, there are many extraordinary fine organizations, community health organizations, that exist, federally sponsored organizations, to provide quality care for women on a variety of health issues,” he said. Other social conservatives have advanced similar claims. Planned Parenthood’s critics say there are plenty of ready alternatives.”....

.
Cruz has yet to be on the wrong side of anything!

Ah, yes... post the polling data when you can distract from Trump’s lawsuit talk and his “liar-liar” talk.

When Donald filed the frivolous lawsuit against Ivana, do we know the outcome?

Cruz could also file an amicus brief on the Trump U scandal.

Cruz/Trump/Rubio are my picks now. Rush is right we have to defeat Hillary and Bern.