John Kasich, Marco Rubio and Ted Cruz are all visiting with Jeb! Bush in Miami before Thursday night’s debate, presumably to secure his endorsement. This sounds like the best possible setting for a very weird revival of “The Lion in Winter” or “Cat on a Hot Tin Roof” or even “King Lear.” With a tip of the hat to Emmett Rensin’s “Trump in Winter,” and without further ado …

(Lights up on Jeb! Bush, seated majestically in an armchair. Enter Kasich, Rubio and Cruz.)

(Everyone starts to speak at once. Bush holds up a hand to quiet them.)

Bush: No. You’ll do as I say now. You jump when I say jump. You sit when I say sit. You shut up when I say shut up. Or you can kiss the exclamation point goodbye. Marco. John. (sighs) Geoffrey.

Cruz: (mutters) My name is Ted.

Bush: No, Ted. Today, your name is Geoffrey.

Cruz: Sir, I was always rooting for you.

Bush: Could you be any more oleaginous, Geoffrey? 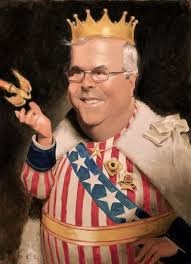 Ah, the court jesters appear before the king to gain his favor...

Jeb’s endorsement will cost votes instead of gaining them.

They are not wanting to visit the unqualified, unwarranted king of nothing and despair; they are visiting to connect with the sources of all that money he had in tow.

Why is the Washington Compost still even talking about him?

Does he have any bags of money left? I thought the fool and his money were soon parted?

Jeb surely doesn’t have any money. But the fools who gave him that much before sure the hell do!

You are missing Mark da liar Levin. He is so obsessed with supporting Canuckruz, he deserves spot on the top.

How much of that “Bush money” comes without the Bush cabal pulling puppet strings?

Trying to get Yeb’s left over campaign money.

I need to add his photo in large living color at the end.

Actually, NONE of it.

I am a big, big Supernatural acolyte. There is always the meme about “putting your most prized possessions in a tin box an burying them at the crossing of two lonely country roads” To make a deal with a Demon.

This, in my opinion, is EXACTLY that.

Robert Heinlein wrote “The Moon is a Harsh Mistress” (an utterly enjoyable book, BTW”.....in it there is the saying “TINSTAAFL” or later, “TANSTAAFL” - “There ain’t no such thing as a free lunch.”

Awww to belong to the Bush Clinton Crime Families Dynasty such as Cruz is now...to be waited on hand and foot, but only if you promise this:

To pass CFR; TTP; TPA, to bow down to us whenever and where ever we are in all situations, to kiss our rings every morning and every night...awww yessss, this is the life style of the ‘establishment Cruz’ life now...

Ted: (an outburst) Try seeing me, Father! I haven’t Marco’s oratory, but he’s now tanking in the polls, not I! I haven’t John’s I don’t know what — God knows what you can see in John — and he’s betrayed you, too. There’s only me.

Bush: (sighs heavily) You think I’d ever make you king?

Ted: You’ll make me king because I’m all you’ve got!

The Texans have struck out twice with Perry who just isn’t smart enough. They rode the Jeb! train til even Mom and Brother George coudln’t keep it going any longer, and now they’ve turned to Brother Neil and lining up to Kiss the Ring.

You want more Bushes? Vote for Cruz. This is only the beginning...

Gawd Ted, do not go looking for the kiss of death.

This might be the strangest election of our collective lifetimes...