Bernie Comes Face to Face with the Clinton Mafia
The New York Post ^ | May 21, 2016 | Michael Goodwin

Now it’s Bernie Sanders’ turn to feel the burn. Unfortunately, the heat is coming from the Clinton Mafia.

The DNC, top members of Congress and their media handmaidens are turning on the formerly adorable, 74-year-old senator with rabid ferocity. His sin: refusing to concede to St. Hillary. -Off with his head! -...Sanders and his followers ... accused of fomenting violence... intimidation tactics,...being rude...sexist....sabotaging Clinton.

In short, they are being treated as if they are Republicans or other infidels.

The New York Times, having failed to kill Donald Trump with a hit piece on how he treated women 30 years ago, turned its Hillary Protection Squad loose .... “Sanders is Urged to Quell Threats By His Followers,” screamed a front-page headline.

When Sanders didn’t respond with bended-knee deference, the Times used a bigger cannon.... “Sanders Willing to Harm Clinton in Homestretch,”....

...attacks...ridiculous... irony is delicious. Trump is quietly pulling together major elements of the fractured GOP, while Dems are ...more bitter and divided....liberals were salivating over a contested Republican convention,... real ...battle is on their team. The same biased media that encouraged Republicans to break with Trump now demand...Dems submit to Clinton.

... Clinton proclaimed that the race is over. “I will be the nominee for my party,” she said.... “That is already done, in effect. There is no way I won’t be.” Beyond taunting fate...

... Sanders still has an outside chance of getting to the convention with more pledged delegates... wants rule changes to force superdelegates to vote with their states instead of being free agents. Dems have nearly 700 superdelegates, with more than 500 committed to Clinton...

Even assuming Clinton survives, and doesn’t get indicted, she is being diminished by the day.

Sanders is exposing how weak she is and how little enthusiasm there is for her.

Sanders reporters are "being treated as if they are Republicans or other infidels."

Interesting to see the clinton mafia against the trump entourage

NY Post is denouncing the NYT and their smear treatment of both Trump and Bernie.

The New York Times remains the free Public Relations team of the Clintons.

And to think, it’s only just begun.

THE CLINTON SOLIDARITY ACT CAPTURED ON FILM
One Clinton lies and the other swears to it. 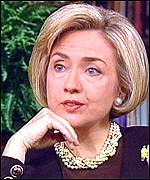 Hillary later went on network TV all decked out in virginal pearls,
denying everything, blaming Billy's B/J on "an invention of
the VRWC." Bill later admitted to it, was impeached, and disbarred.

NOTE---Pres Clinton was a tax-paid employee using tax -paid offices .....
but the sucker claimed it was his business what he did there (groan).

It’d be best for him to get a face lift, color his hair, whiten his teeth, change his name to Ralph Henderson and “split the scene” (as I’m sure he said quite often during his many protests in the 60’s)

Coming to the DNC convention..... in droves

In his comparison of the Democrat fight for control of their party, Michael Goodwin, like many others overlooks one important thing. Ronald Reagan and Gerald Ford were both honorable men.
Plus the fact that the Democrat wing of Uni-party in 2016 is light years away from the Republican party of 1976.

That preference chart has got to be from a leftist slant, I mean, look at it’s origin - ABC. Considering the lack of enthusiasm for Hitlery since day one, and the enormous turnouts for Trump, coupled with the facts that Hitlery is a known career criminal and Trump is very successful, that chart is full BS.

What I find interesting, is the where it shows Trump finally surpassing Hitlery. I interpret this as her popularity so poor even the lefties cannot fake it. To me this equates to a huge landslide in favor of Trump.

It’s going to be a riot that they will remember for a long time.

“...turning on the formerly adorable, 74-year-old senator with rabid ferocity.”

The New York Times knows nothing about old people. As someone of age I can vouch for the fact after a certain point in your life you don’t give a s**t about what others think about you.

For most, all their victories (and failures) are behind them. For Sanders, he is in the spotlight now. He has a chance to get his message (regardless how bad we may think it is) out, something that has eluded him his entire life.

Do they think trying to demonize him now will get him to concede.

If anything, he will just raise his cane and tell the whippersnappers to just shut the hell up and let the grown ups talk.

I personally believe Sanders would be an ineffective President, someone in over his head from the beginning.

But it does my heart good to see someone finally standing in the way of the Clintons.

So go Bernie, feel the Bern, enjoy your time in the spotlight because they will destroy you in the end. Here is the Clintonian “parsing” in that comment...”not a single time..” Then how many times did you?

I agree, there’s no comparison. Both Reagan and Ford had class.

Yes, it's going to be endlessly entertaining!

Clinton is being diminished by the day.

Sanders is exposing how weak she is and how little enthusiasm there is for her.