Embattled Alabama Republican Senate candidate Roy Moore’s lawyer on Wednesday fired back at one of the women accusing Moore of sexual abuse, telling reporters that she is lying.

In accusing Moore of trying to sexually assault her in 1977 when she was 16, Beverly Young Nelson this week offered a key piece of physical evidence — a yearbook that Moore purportedly signed at the restaurant where she worked.

The yearbook seemed to establish that Moore and Nelson knew each other during the time period when the alleged assault occurred. But attorney Phillip Jauregui told reporters in Birmingham on Wednesday that Moore flatly denies writing the passage. He demanded that Nelson’s lawyer, Gloria Allred, turn over the yearbook to a third-party custodian so that a handwriting expert can examine it and — perhaps more importantly — allow an expert to test the age of the ink.

“Release the yearbook so that we can determine: Is it genuine, or is it a fraud?” Jauregui said.

Allred later told CNN that she would be willing to accede to the request as long as the Senate Judiciary Committee or the Senate Ethics Committee convene a hearing in the next two weeks and subpoena Moore.

Jauregui urged people to look at “Olde Hickory House” on the page.

“Judge Moore says there is no way in the world that’s his handwriting. And I want you to look at it,” he said. “Look at some other writing of his and make your own determination. That’s what our expert will be doing, but for now, I’m asking you all to take a look. Use your own judgment.”

Jauregui said Moore’s judicial assistant when he later served as a judge in the county used to stamp his signature and then place her own initials — “DA.” — next to it on legal documents. Jauregui also provided reporters with copies of court documents showing that Moore was the judge who presided over Nelson’s divorce case in 1999.

The lawyer suggested that Moore’s role in her divorce case undercuts Nelson’s claim that she had no contact with him after the attempted assault. He made a challenge to Allred about whether she still maintains Moore wrote the passage.

“That’s not an allegation,” Jauregui said. “That’s a question.”

The news conference comes at a time when Republican leaders across the country are demanding that Moore drop out of the race. But many Alabama Republicans are sticking with him. On Tuesday, the Republican Party Executive Committee in the 5th Congressional District in north Alabama voted to express support for Moore.

“This is a campaign, so you can expect most anything to come out, but you know we can’t just stand by idly and let false charges go without answering,” he said.

Jauregui said the campaign is not ready to respond to every allegation made by the four other women named in a story by The Washington Post last week.

Jauregui, who ran Moore’s successful campaign for chief justice of the Alabama Supreme Court in 2000, said he has been with the former judge at about 100 meetings and has watched him around, perhaps, 10,000 women.

“Not once — not one time — have I ever seen him act even remotely inappropriate against any woman, toward any woman.”

Jauregui said the allegations against Moore have been “incredibly, incredibly painful” for his family.

They pretty much bury the lede, that the woman forged his signature.....

I hope they can find the stamp.....and send early Christmas cards to Beverly and Allred.

So we're looking for one...maybe two other people...as forgers.

Well that will never happen!

Read this link and all of the comments. It does indeed cause much speculation:

I doubt if either Beverly or Gloria did the forgery. It’s not as easy as you think.

Hillary knows plenty that can do it

Also, the '77' is written by someone other than the '77' written by Ray Brooks, that's obvious.

Supposedly, Ray Brooks is DEAD so he's not around to dispute this HOAX.

Nelson went to school with a Roy Moore. He graduated in ‘77/

All it takes is a piece of glass on a box with a light inside to create a lightbox. Lightboxes were used extensively by graphic artists to trace stuff before Photoshop came along. As crude as this was done, I would say it was the accuser wh presented it to Gloria and Gloria still has the hook in the corner of her mouth.

Someone posted it to FreeRepublic. That Roy Moore graduated in 1977.

Allred later told CNN that she would be willing to accede to the request as long as the Senate Judiciary Committee or the Senate Ethics Committee convene a hearing in the next two weeks and subpoena Moore.

thry don’t have jurisdiction to do this as far as I know...what about in 4 weeks when he is elected?

how about a criminal complaint for election tampering and the fbi-someone wake up sessions!

The Senate has no jurisdiction—this is a state election.

Plus she cannot state yearbook is NOT a fake—Blitzer gave her a chance to do so:

Besides, her client is lying, and she should be disbarred for defamation of character.

She wants to hold the yearbook hostage till a Congressional hearing? 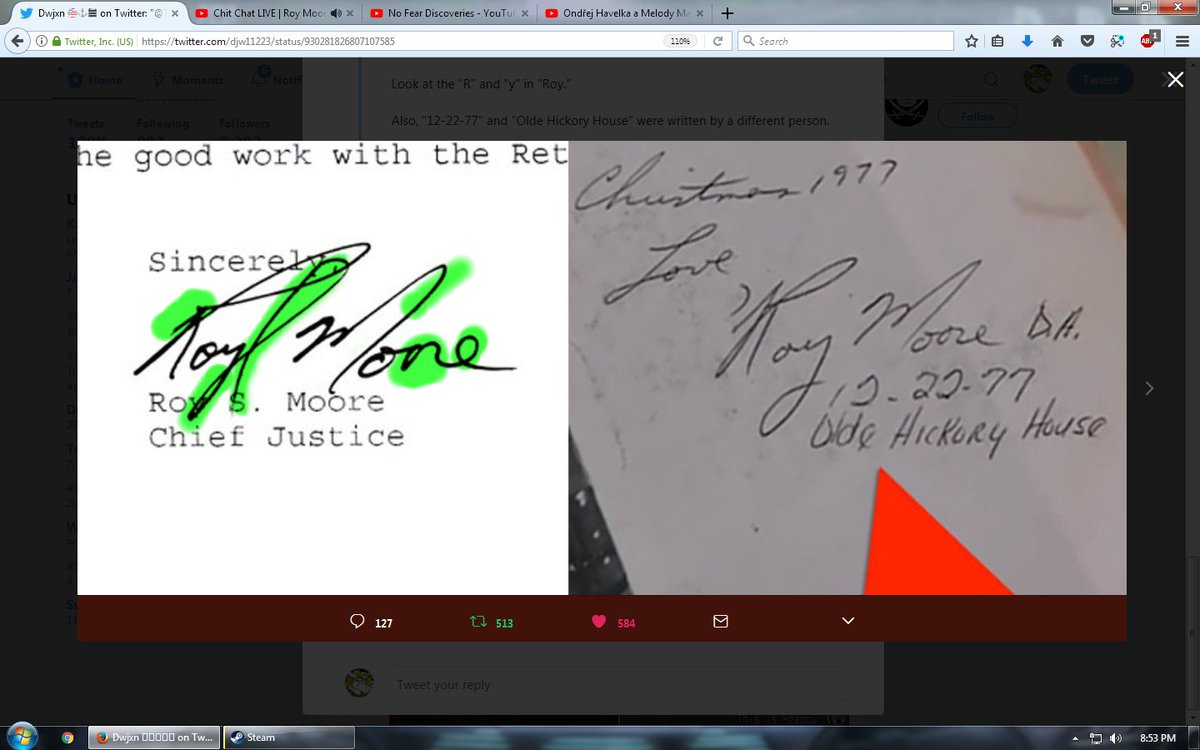 “Look at the two versions of the number “7,” tweeted Wictor.

The inflection of the “Y” is more pronounced in Moore’ signature as Chief Justice. The “R” is noticeably longer in the signature of Chief Justice, as well.

“During his legal career, Judge Moore became the first full-time Deputy District Attorney in Etowah County, Alabama, and served in this position from 1977 until 1982. In 1984, Judge Moore undertook private practice of law in Gadsden, Alabama,” states Moore’s bio on his campaign website.