Judicial Watching is calling for a re-opening of the investigation into Hillary Clinton's emails after finding more classified information on the former Secretary of State's non-"state.gov" email system.

On Thursday, the watchdog revealed that it had received two batches, 184 pages and 45 pages, of newly uncovered emails belonging to Hillary Clinton from the U.S. Department of State sent and received over her unsecured server.

The emails were uncovered by a FOIA lawsuit filed on May 6, 2015, after the State Department failed to respond to a March 4, 2015 FOIA request seeking all emails sent or received by Clinton in her official capacity as Secretary of State, as well as all emails by other State Department employees to Clinton regarding her non-"state.gov" email address.

Judicial Watch broke down what they found:

Interesting, but not surprising, is also an email that shows a meeting scheduled between Hillary Clinton and leftwing billionaire George Soros. 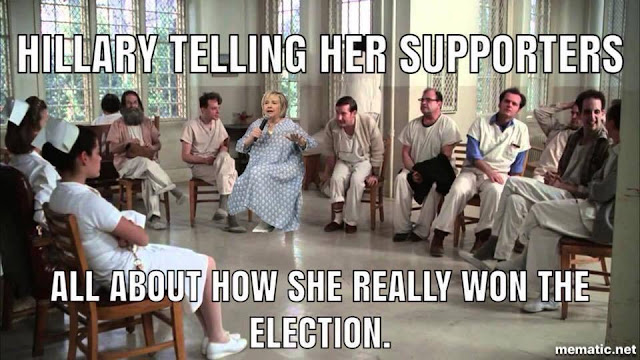 Simply stated “Lock her up.”

Her wardrobe alone should be classified as a felony. What if impressionable liberal women imitate her?

Was this before or after she got the lobotomy?

The Clintons and Soros are bff’s. Chelsea got married on Soros’ land near Rhinecliff, NY on the Hudson.

does she still have HER security clearance?

no way to tell

My modest monthly contribution to JW gives me
the highest return towards justice for the
Clintons.

Sessions can wake up and find it is 2018 and no Clinton or Obama lawbreaker is in jail despite thousands of classified materials taken to unsecured Hillary,Huma or Carlos Danger Weiner laptops which is a felony.
“Imagine that! Geewillickers. Am I still dreaming. Pinch me. Oh well I think I’ll just go back to bed.”

From her earliest days as secretary of state, Hillary Clinton's aides and senior officials focused intently on accommodating the secretary's desire to use her private email account, documents and interviews show.

Hillary Clinton's email problems began in her first days as secretary of state. She insisted on using her personal BlackBerry for all her email communications, but she wasn't allowed to take the device into her seventh-floor suite of offices, a secure space known as Mahogany Row.

For Clinton, this was frustrating. As a political heavyweight and chief of the nation's diplomatic corps, she needed to manage a torrent of email to stay connected to colleagues, friends and supporters. She hated having to put her BlackBerry into a lockbox before going into her own office.

Her aides and senior officials pushed to find a way to enable her to use the device in the secure area. But their efforts unsettled the diplomatic security bureau, which was worried that foreign intelligence services could hack her BlackBerry and transform it into a listening device. On Feb. 17, 2009, less than a month into Clinton's tenure, the issue came to a head. Department security, intelligence and technology specialists, along with five officials from the National Security Agency, gathered in a Mahogany Row conference room. They explained the risks to Cheryl Mills, Clinton's chief of staff, while also seeking "mitigation options" that would accommodate Clinton's wishes.

"The issue here is one of personal comfort," one of the participants in that meeting, Donald Reid, the department's senior coordinator for security infrastructure, wrote afterward in an email that described Clinton's inner circle of advisers as "dedicated [BlackBerry] addicts." Clinton used her BlackBerry as the group continued looking for a solution.

But unknown to diplomatic security and technology officials at the department, there was another looming communications vulnerability: Clinton's BlackBerry was digitally tethered to a private email server in the basement of her family home, some 260 miles to the north in Chappaqua, N.Y., documents and interviews show. Those officials took no steps to protect the server against intruders and spies, because they apparently were not told about it.

The vulnerability of Clinton's basement server is one of the key unanswered questions at the heart of a scandal that has dogged her campaign for the Democratic presidential nomination. Since Clinton's private email account was brought to light a year ago in a New York Times report - followed by an Associated Press report revealing the existence of the server - the matter has been a source of nonstop national news. Private groups have filed lawsuits under the Freedom of Information Act. Investigations were begun by congressional committees and inspector general's offices in the State Department and the U.S. Intelligence Community, which referred the case to the FBI in July for "counterintelligence purposes" after determining that the server carried classified material.

The FBI is now trying to determine whether a crime was committed in the handling of that classified material. They are also examining whether the server was hacked. One hundred forty-seven FBI agents have been deployed to run down leads, according to a lawmaker briefed by FBI Director James Comey. The FBI has accelerated the investigation because officials want to avoid the possibility of announcing any action too close to the election.

The Washington Post reviewed hundreds of documents and interviewed more than a dozen knowledgeable government officials to understand the decisions and the implications of Clinton's actions. The resulting scandal revolves around questions about classified information, the preservation of government records and the security of her email communication.

From the earliest days, Clinton aides and senior officials focused intently on accommodating the secretary's desire to use her private email account, documents and interviews show. Throughout, they paid insufficient attention to laws and regulations governing the handling of classified material and the preservation of government records, interviews and documents show. They also neglected repeated warnings about the security of the BlackBerry while Clinton and her closest aides took obvious security risks in using the basement server.

Senior officials who helped Clinton with her BlackBerry claim they did not know details of the basement server, the State Department said, even though they received emails from her private account. One email written by a senior official mentioned the server.

The scandal has pitted those who say Clinton was innocently trying to find the easiest way to communicate against those who say she placed herself above the law in a quest for control of her records. She and her campaign have been accused of confusing matters with contradictory and evolving statements that minimized the consequences of her actions.

Clinton, 68, declined to be interviewed. She has said repeatedly that her use of the private server was benign and that there is no evidence of any intrusion. In a news conference last March, she said: "I opted for convenience to use my personal email account, which was allowed by the State Department, because I thought it would be easier to carry just one device for my work and for my personal emails instead of two." During a Democratic debate on March 9, she acknowledged using poor judgment but maintained she was permitted to use her own server: "It wasn't the best choice. I made a mistake. It was not prohibited. It was not in any way disallowed."

The unfolding story of Clinton's basement server has outraged advocates of government transparency and mystified political supporters and adversaries alike. Judge Emmet G. Sullivan of the U.S. District Court in Washington, D.C., who is presiding over one of the FOIA lawsuits, has expressed puzzlement over the affair. He noted that Clinton put the State Department in the position of having to ask her to return thousands of government records - her work email. "Am I missing something?" Sullivan asked during a Feb. 23 hearing. "How in the world could this happen?"

An aide selects a reporter to ask Hillary Clinton, former U.S. secretary of state, left, a question during a news conference at the United Nations in March. Clinton defended the legality of her use of a private email account and server while she served as secretary of state, saying that she had done so out of a desire for convenience but should have used a government account for work purposes.

Hillary Clinton began preparing to use the private basement server after President Obama picked her to be his secretary of state in November 2008. The system was already in place. It had been set up for former president Bill Clinton, who used it for personal and Clinton Foundation business. On Jan. 13, 2009, a longtime aide to Bill Clinton registered a private email domain for Hillary Clinton, clintonemail.com, that would allow her to send and receive email through the server.

Eight days later, she was sworn in as secretary of state. Among the multitude of challenges she faced was how to integrate email into her State Department routines. Because Clinton did not use desktop computers, she relied on her personal BlackBerry, which she had started using three years earlier.

For years, employees across the government had used official and private email accounts. The new president was making broad promises about government transparency that had a bearing on Clinton's communication choices. In memos to his agency chiefs, Obama said his administration would promote accountability through the disclosure of a wide array of information, one part of a "profound national commitment to ensuring an open government." That included work emails.

One year earlier, during her own presidential campaign, Clinton had said that if elected, "we will adopt a presumption of openness and Freedom of Information Act requests and urge agencies to release information quickly." But in those first few days, Clinton's senior advisers were already taking steps that would help her circumvent those high-flown words, according to a chain of internal State Department emails released to Judicial Watch, a conservative nonprofit organization suing the government over Clinton's emails.

Leading that effort was Cheryl Mills, Clinton's chief of staff. She was joined by Clinton adviser Huma Abedin, Undersecretary Patrick Kennedy and Lewis Lukens, a senior career official who served as Clinton's logistics chief. Their focus was on accommodating Clinton. Mills wondered whether the department could get her an encrypted device like the one from the NSA that Obama used. "If so, how can we get her one?" Mills wrote the group on Saturday evening, Jan. 24. Lukens responded that same evening, saying he could help set up "a stand alone PC in the Secretary's office, connected to the internet (but not through our system) to enable her to check her emails from her desk." Kennedy wrote that a "stand-alone separate network PC" was a "great idea." Abedin and Mills declined to comment for this article, according to Clinton spokesman Brian Fallon. Lukens also declined to comment, according to the State Department.

“does she still have HER security clearance?”

Of course she does not a doubt in my mind.

They need to get these crimes settled. It’s obvious that the ho intends to run again. Don’t need all these Clintoon scandals reopening just before the election again.

Should I hold my breath?

It matters not. Bill has his from here to eternity. Even if she lost hers, she could just look over his shoulder.

And BMitch McConnell won’t allow the senate to be in recess for Trump to be able to boot the feckless Sleepy Sessions and recess-appoint an actual coherent AG. BMitch will share the blame as much as Sessions for the lack of justice being served.

Unless I’m missing something, she has been quiet and out of the public eye (praise God!) for a while as things seem to be unraveling for her side....