Since August, court records have revealed that the undercover FBI agent was at the scene in close proximity to the shooters. Looking at the evidence, Joiner believes the FBI had some prior knowledge of the plot. That bothers Joiner deeply.

"It's been pretty aggravating to know that there's more to the story," Joiner, 60, said this week. "There was no provision to get unarmed civilians like myself out of harm's way if there was going to be this conflict. So that's very disturbing. That's not the kind of thing we do in the United States with our citizens."

The FBI agent's presence that day was known to Joiner shortly after the shooting. As Simpson and Soofi stepped from their car, the agent, in a car just behind them, drove around them and sped away, the court records show. But he was quickly stopped and detained by Garland police, who apparently didn't know he was a federal agent.

Garland police won't say if they knew anything before the attack. Joiner has requested records about the incident from the Garland Police Department, but the department has denied his request, citing an "ongoing criminal investigation," despite the fact that the two gunmen are dead and a third suspect has been convicted in Phoenix and sentenced to 30 years.

"The case is closed — why is the city of Garland hiding this?" asked Trenton Roberts, Joiner's son-in-law and attorney. "The fact that at the end of the day, you can't get any information out of them does seem a bit like a slap in the face."

The FBI’s war on local police is real.

“Joiner has requested records about the incident from the Garland Police Department, but the department has denied his request, citing an “ongoing criminal investigation,”

It's the kind of thing the FBI does, Mr. Joiner. More often than you think.

The FBI asset was IN THE SAME CAR as the shooters, bailing out maybe 10 seconds before the shooting started..!

He was screaming at them to "Tear up Texas..!!"

He was pumping them up, much as coach does to the football team, in the minutes before The Big Game.

ALL the video surveillance footage of the Murrah Building disappeared:

Observe, too, what happened to the Vegas Massacre footage.

Perhaps this was based on instructions from FBI higher-ups to let ISIS rack up a big deplorable body count, to show that having a gun doesn’t help you defend yourself against armed men. Or it could just be that the Muslim undercover FBI agent wanted a bunch of blasphemous deplorables dead. Either way, some of these people need to be stripped of their pensions, at the very least, if not brought up on charges.

7 posted on 08/19/2018 4:48:17 PM PDT by Zhang Fei (They can have my pitbull when they pry his cold dead jaws off my ass.)
[ Post Reply | Private Reply | To 1 | View Replies]
To: Hojczyk
Marxists, maoists and muslims were in charge of the executive branch for 8 long years...#fundamentaltransformation #obamanation 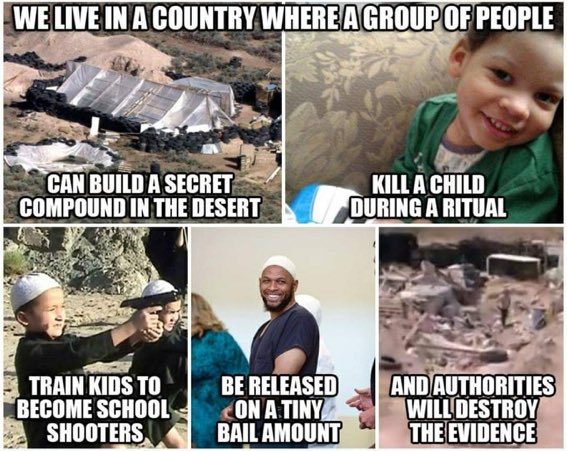 Peter Strzok would respond to that statement by smirking.

Another on the list of FBI known-wolf failures. It’s pretty long these days.

Time and time again, information is withheld from the public, even when it would seem that an investigation is over.

In cases like the San Bernardino Jihadis and the NM Jihadis, crime scenes are damaged or destroyed, while investigations are probably still ongoing.

Maybe there are valid reasons for these things. Though, I doubt it.

At the very least, such actions make people suspicious of the government. At worst, some entity in the government wants to cover up wrongdoing. Especially if it involves the ROP.

Which makes one wonder about incidents like the Adam Lanza school shooting. Much has been withheld, which has caused people to cry, “hoax”. Was there some hidden link to the ROP in that shooting? Who knows?

So - Comey was head of FBI, and they’d watched this guy for 8 YEARS! Makes me think of the New Mexico compound - they were watching but ‘nothing really bad had happened yet.’ Thank God for the sheriffs etc who went into the compound and got the creeps. And who later destroyed the compound, regardless of the San Fran judge’s releasing them.

Oddly enough it was reported the FBI had paid him (Lanza) a visit. It was said they had traced a hacker or whatever to his address and I remember reading something like they ended up praising the kid on his tech skills or whatever.