WaitThis Is Why Alexandria Ocasio-Cortez Shut Down The Press At A Town Hall Event?
Townhall.com ^ | August 19, 2018 | Matt Vespa

Alexandria Ocasio-Cortez is a rising star in the Democratic Party, but also its far left flank. Some have called her the future. You can take that as a bad thing, given that her agenda will cost us tens of trillions of dollars over the next decade; the three-decade projection soar into hundreds of trillions ($218 trillion to be exact), or view that as a sign of GOP wins for the next decade due to voters suffering from the sticker shock. Her inability to grasp basic economics also doesn’t work in her favor. Still, she gained prominence to clipping incumbent Democratic Congressman Joe Crowley (D-NY). She’s earned her time in the sun. But like Icarus, she may already be flying too close to the sun. She recently shut out the press at recent town hall events. The reason her campaign gave was that they wanted to create a “safe space” (via Queens Chronicle) [emphasis mine]:

Alexandria Ocasio-Cortez tweeted on Monday that stops on her “listening tour” throughout the district, like the one held a day earlier in Corona, are “intended for lively, compassionate discourse with a diversity of viewpoints.”

According to the Democratic nominee in the 14th Congressional District, she and the dozens of area residents who attended the event “talked about race, immigration, healthcare, disability rights and housing.”

But unless you were in the room on Sunday, you won’t know what specific community problems were mentioned or how Ocasio-Cortez planned to address them once she is sworn in.

According to Ramos Rios and campaign spokesman Corbin Trent, that unwanted attention led to a press ban both for last Wednesday’s listening tour stop in the Bronx and Sunday’s in Corona.

“We wanted to help create a space where community members felt comfortable and open to express themselves without the distraction of cameras and press. These were the first set of events where the press has been excluded,” Trent said. “This is an outlier and will not be the norm. We’re still adjusting our logistics to fit Alexandria’s national profile.”

The candidate herself tweeted similar statements when criticized by the press. Ocasio-Cortez called the controversy a “non-story.” Oh, this is great. She’s a public figure. She’s running for office, but let’s have safe spaces and shut out the press—all of this while the national news media establishment thinks press freedom is under threat by President Trump. Trump will blast you on stage. He’ll mock the liberal media, but say what you will—he’s available. Even ABC News’ political director admitted that the Trump White House is more accessible than when Obama was in office. The Washington Post’s Seung Min Kim noted the lack of self-awareness here, while RNC spokesperson Kayleigh McEnany joked that a socialist shut down the press, which is in keeping with other far left authoritarian regimes tolerate media freedoms: they don’t.

.@Ocasio2018 is in for a rough time on Capitol Hill -- where reporters roam freely at all hours of the day and night -- if this is her attitude toward the press https://t.co/3RyBHVQEdq— Seung Min Kim (@seungminkim) August 17, 2018

Our community is 50% immigrant. Folks are victims of DV, trafficking, + have personal medical issues.

This town hall was designed for residents to feel safe discussing sensitive issues in a threatening political time.

We indicated previously that it would be closed to press.— Alexandria Ocasio-Cortez (@Ocasio2018) August 17, 2018

Additionally, with this town hall non-story: it was designed to protect + invite vulnerable populations to PUBLIC discourse: immigrants, victims of domestic abuse, and so on.

We indicated previously that the event would be closed to press. Future ones are open.— Alexandria Ocasio-Cortez (@Ocasio2018) August 17, 2018

So, good luck people of the Queens. Ocasio-Cortez seems to have a constituent relations system that places some higher than others. Welcome to the new Democratic Party, where identity politics is supreme. Apparently, having the press around is a triggering action. So, who is worse, Ms. Cortez—Trump or the media? The irony in shutting down the press, besides her being a public figure, is that the reason the media is mobbing her is precisely because she’s anti-Trump. I think we’re watching a slow-mocking train wreck, folks. Pass the bourbon.

Ah, Censorship. The foundation of the New Left

And...she unintentionally confirms the dysfunctional nature of our current immigration process. The gift that keeps on giving...lol.

Except if the same spineless RINOS are still in Congress, they will go right along with her agenda and thus the GOP will suffer the consequences also.

4 posted on 08/20/2018 12:10:09 AM PDT by TheCipher (To my mind Judas Iscariot was nothing but a low, mean, premature Congressman. - Mark Twain)
[ Post Reply | Private Reply | To 1 | View Replies]
To: Kaslin
When this socialist loses to Dude, who is still on the ballot in NY, she could liaison in Venezuela with that Socialist government and pull them out of their death spiral.
5 posted on 08/20/2018 12:28:20 AM PDT by urbanpovertylawcenter (the law and poverty collide in an urban setting and sparks fly)
[ Post Reply | Private Reply | To 1 | View Replies]

She may very well become an article you post, in the future, as an ancient relic.... 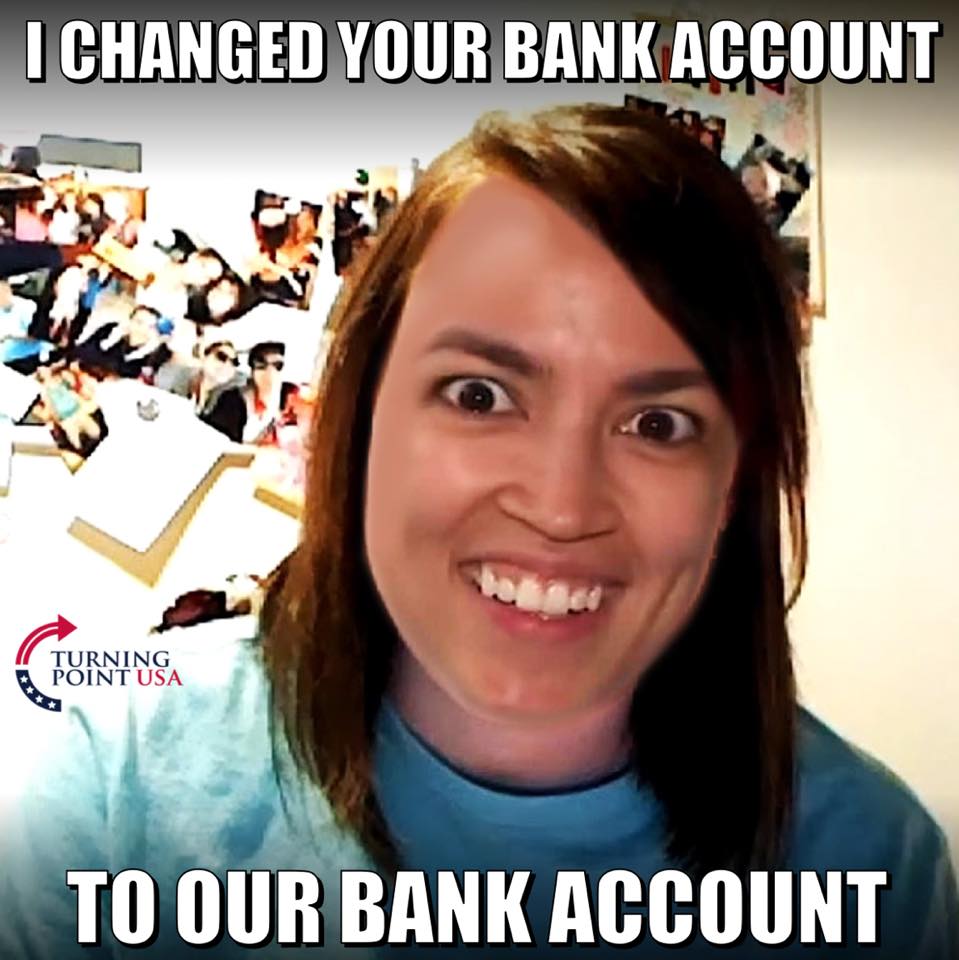 So while the Cultural Marxists of the Left uses the Media to smear Conservatives, they use censorship when the Conservatives react. Seems to me we fought the British when that happened.

So the fawning MSM, even if breathless for her, isn’t a safe enough safespace for her?

Or is she fearful that her stupidity and low IQ will be noticed?

This is because of her Hawaii gaffe a week ago, when she forgot to introduce the local candidate.

They KNOW she is a Gaffe Factory.

Just as with David HOgg...I’ve reached the epitome of “Cortez Fatigue”.

The left sure knows how to attach themselves to losers.

“So the fawning MSM, even if breathless for her, isn’t a safe enough safespace for her?
Or is she fearful that her stupidity and low IQ will be noticed?”

Stupidity and low IQ? Ding Ding Ding! No more calls folks, we have a winner! When she won the primary in her District the turnout was 20%. The long term Democrat she beat is still on the November ballot as an Independent. I for one don’t understand why the Democrats aren’t out there campaigning for him. Anybody got an answer?