Editor's Note: This piece is adapted from D'Souza's new book Death of a Nation.

We hear a lot today from progressives about how neo-Nazis support President Trump.  In reality this is questionable; no one has actually surveyed or queried neo-Nazis to find out if this is actually true.  Moreover, several leading neo-Nazis like Andrew Anglin, co-editor of the Daily Stormer, have leftist backgrounds.Even so, gullible people go along with the progressive allegation, because they have been taught that fascism and Nazism are “on the right.”

But are they?  We can throw light on this question by examining the mutual admiration society between the FDR administration and Mussolini’s Italian fascists, and also the praise that the Nazis heaped upon FDR’s New Deal in the early 1930s.  Hitler, Mussolini and FDR seem to have regarded each other as ideological kindred spirits.  This is a subject hardly mentioned in progressive textbooks or progressive historiography.

In 1933, FDR responded to a journalist who asked him his view of Mussolini. “I don’t mind telling you that I am keeping in fairly close touch with that admirable Italian gentleman.” That same year FDR again gave his view of Mussolini to Breckinridge Long, US ambassador to Rome.  “There seems to be no question that he is really interested in what we are doing and I am much interested and deeply impressed by what he has accomplished and by his evidenced honest purpose of restoring Italy.”

FDR’s enthusiasm for Mussolini and Italian fascism was echoed by other progressives of his time. “An amazing experiment is being made here,” wrote progressive historian Charles Beard.  “It would be a mistake to allow feelings aroused by contemplating the harsh deeds and extravagant assertions that have accompanied the Fascist process to obscure the potentialities and lessons of the adventure.”

Herbert Croly, editor of the New Republic, insisted that fascism offered the potential for the “spiritual reconstruction” of society.  Progressives in popular culture picked up the fascist tune. “You’re the top, you’re Mussolini,” crooned Cole Porter in an early-thirties hit song whose Mussolini reference was tactfully removed a few years later when the Italian fascists invaded Ethiopia.

FDR dispatched members of his so-called brain trust to fascist Rome to study fascist policies, with a view to importing some of them to America.  FDR viewed fascism as even more progressive than the New Deal, and he wanted his New Dealers to learn from it.  Rexford Tugwell, FDR’s close adviser, upon returning from Rome wrote of fascism, “It’s the cleanest neatest, most efficiently operating piece of social machinery I’ve ever seen.  It makes me envious.”

FDR regarded his National Recovery Act (NRA) as the most important of his New Deal programs.  It was directly modeled on Italian fascism.  The NRA empowered the federal government to establish coalitions of labor and management in every industry to set production targets, wages, prices, and even maximum and minimum working hours.  According to Tugwell, the NRA was designed to “eliminate the anarchy of the competitive system.”

FDR’s man to run the NRA, General Hugh Johnson, was an avowed admirer of fascism who carried with him, and routinely quoted from, a fascist propaganda pamphlet, The Structure of the Corporate State, written by one of Mussolini’s aides.  Under Johnson, the NRA issued its own brochure Capitalism and Labor Under Fascism. It acknowledged that “the fascist principles are very similar to those which have been evolving in America.”

We’ve learned how FDR and his New Dealers viewed the fascists; now let’s see how the fascists viewed them.  Shortly after FDR unveiled the early programs of the New Deal, Mussolini reviewed his book Looking Forward in an Italian magazine.  Mussolini concluded that FDR’s policies and outlook were “reminiscent of the ways and means by which Fascism awakened the Italian people.”

Mussolini added, “The question is often asked in America and in Europe just how much Fascism the American president’s program contains.”  Mussolini’s answer: a lot.  Fascism, Mussolini said, “is the principle that the state no longer leaves the economy to its own devices.”  Terming the New Deal “boldly interventionist,” Mussolini identified its main goal as one of replacing America’s free market economy with an economy controlled and regulated by the centralized state.

FDR, Mussolini concluded, was moving his country in the direction of national socialism and “without question the mood accompanying this sea change resembles that of Fascism.”

If this is not incriminating enough, around the same time, the official Nazi newspaper Volkischer Beobachter offered its views of America’s new president.  “We too as German National Socialists are looking toward America.”  FDR, the Nazi publication said, was replacing “the uninhibited frenzy of market speculation” of the 1920s with the “adoption of National Socialist strains of thought in his economic and social policies.”  Of his policies the paper concluded, “We fear only the possibility that they might fail.”

On another occasion, the Volkischer Beobachter examined FDR’s leadership style which it found comparable to Hitler’s own dictatorial style or Fuhrerprinzip.  Returning to FDR’s New Deal policies, the Nazi paper noted that “if not always in the same words,” FDR too “demands that collective good be put before individual self-interest.  Many passages in his book could have been written by a National Socialist.  In any cases, one can assume he feels considerable affinity with the National Socialist Philosophy.”

I get these quotations from historian John Patrick Diggins’ Mussolini and Fascism, published in 1972 and virtually unknown today, and also from the German historian Wolfgang Schivelbusch’s equally obscure study Three New Deals.  Not a single prominent FDR biography or progressive history of the period gives us the scoop on fascist and Nazi enthusiasm for FDR.  Even Ira Katznelson’s admirable recent study Fear Itself—the most honest progressive treatment of the links between the New Deal and Fascism—artfully leaves out the most incriminating quotations.

My conclusion is that, buried here in the archives of history, is incontestable evidence that FDR’s progressive New Dealers and the fascists, both in Italy and in Germany, viewed each other as ideological comrades on the same side of the aisle.  They all recognized fascism to be on the left.  They praised each other, and adopted each others policies.  This is the crushing historical truth that progressives now try to conceal by foisting the fascist label on a man who has nothing to do with fascism, Donald Trump.

Dinesh D’Souza’s latest book Death of a Nation is published by St. Martin’s Press. His movie of the same title is in theaters nationwide.

Hitler DID meet with Jessie Owens.

Interpolation of Jules Archer’s “The Plot to Seize the White House” (the Wall St. Plot) and Carroll Quigley’s “Tragedy & Hope”:

Fascism is the political manifestation of the period of economic history known as Monopoly Capitalism.

The greatest cartel today is the Socials. They are today’s Fascist Backers. 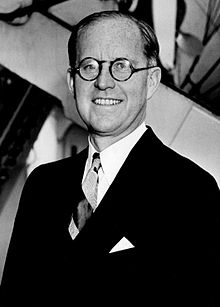 I remember my father always telling me that FDR was a commie and Joseph Stalin’s puppet.

He told me that Stalin had him create social security as a way of implementing communism in the USA.

I think he may have been right.

But can’t find any reference to that on the internet these days.

Roosevelt’s naivete and/or willing blindness re Stalin were staggering in their stupidity.

Patton, though apparently an insufferable @hole, was right on the money in ‘45.

12 posted on 08/23/2018 7:59:10 AM PDT by tomkat
[ Post Reply | Private Reply | To 1 | View Replies]
To: Kaslin
Fascism is characterized by central control of the economy with the illusion of private ownership of industry but all under direct control of the state. Nowhere is "being a meanie" in the definition of fascism.

Trump is shredding government regulations of industry. He's the opposite of a fascist.

13 posted on 08/23/2018 8:15:09 AM PDT by pepsi_junkie (Russians couldnt have done a better job destroying sacred American institutions than Democrats have)
[ Post Reply | Private Reply | To 1 | View Replies]
To: pepsi_junkie

Fascism and Nazism are two sides of the same coin.

Fascism is characterized by central control of the economy with the illusion of private ownership of industry but all under direct control of the state.

Why would you need two companies making widgets when Company A over there makes perfectly fine widgets.....?

Sadly, the movie Death of a Nation is a complete flop, struggling in about 300 theaters after opening in more than 1000. Even by the standards of documentaries...

I think the title detracts from the substance of the article. Certainly Benito and Adolf were aware of the similarities of their respective economic systems to FDR’s New Deal and it was in their interest to praise the similarities. And, no doubt, FDR’s people looked on Benito’s Italy with some admiration. However, I do not think you could find much praise from FDR’s people for Herr Hitler’s NSDAP.

German national socialism and the Italian fascism were two distinct ideologies. Their economic programs were similar — opposed to free markets, private ownership and management of industry, and every aspect of individualism — but their objectives were different. For one thing, German national socialism was far more anti-Christian and was obsessed with Aryan superiority and the enslavement and/or eradication of human beings they thought inferior, especially Jews, Roma, and Slavs. Italian fascism expressly supported the Roman Catholic Church as being integral to the Italian fascist project and expressly opposed any persecution of the Jews. (It wasn’t until after Nazi control in 1943 that the Holocaust came to Italy.)

Though you’d be hard pressed to find any praise from FDR for Hitler’s national socialism, John Maynard Keynes wrote that his general economic theory was particularly well suited for Hitler’s ideology in the forward to the German translation of Keynes’ magnum opus. Indeed, the economics of German national socialism, Italian fascism, and FDR’s NRA are almost indistinguishable.

In fact, Vatican City exists as a State today, thanks to Mussolini.

Ever hear of William S. Knudsen?

To be honest. No