Former President Obama has no shame, but don’t count on the mainstream media to tell you this. They are in on the deception. His talk at the University of Illinois on Friday contained all of the divisive rhetoric that he and the mainstream press accuse President Trump of engaging in.

The issue isn’t Mr. Obama breaking with the tradition of former presidents and becoming so political criticizing his predecessor. The problem is his lies and the lies of the media.

Of course he has no shame.

He pulled off the biggest fraud in human history.

He is NOT a natural born citizen and yet still was sworn in.

He cleverly told US he was ineligible when he posted on his website:

“As a Kenyan native, Barack Obama Sr. was a British subject whose citizenship status was governed by The British Nationality Act of 1948. That same act governed the status of Obama Sr.‘s children.”

The website said he was a native citizen of the US by virtue of having been born here.

Both true, but an acknowledgment that he was not a natural born citizen, which is the Constitutional requirement.

Natural born citizens have only ONE nationality.
They are NATURALLY citizens because they cannot be anything else.

Hey now, MANY freepers are/were quite satisfied believing that the Fraud “was probably born in Hawaii”.

Yeah, I know, many of them also believe that Anwar al-Awlaki’s kids born in Yemen to one citizen parent are natural born citizens eligible to be President.
If Ted Cruz is, they are.

9 posted on 09/14/2018 11:56:45 AM PDT by bitt (We know not what course others may take, but as for me, Give me Liberty, or Give me Death!)
[ Post Reply | Private Reply | To 1 | View Replies]
To: rogerantone1; SunkenCiv; Liz
They leave out that Mr. Trump made it very clear that his comment did not pertain to “neo-Nazis and the white nationalists.” Before making the both sides comment, Mr. Trump forcefully said: “And you had people, and I’m not talking about the neo-Nazis and the white nationalists, because they should be condemned totally. But you had many people in that group other than neo-Nazis and white nationalists.”

But where were the fact-checkers?

Obama can lie his head off because the whores and pimps at the Washington Post and New York Times will cover FOR Obama and add their own lies to his. Same with CNN and MSNBC. Bimbos and bimbettes who have mouthed this lie hundreds of times. And 'fact checkers'? The Tampa Bay Times hasn't had a conservative on staff in over 30 years.

Pubs are just as guilty for allowing the usurper in. 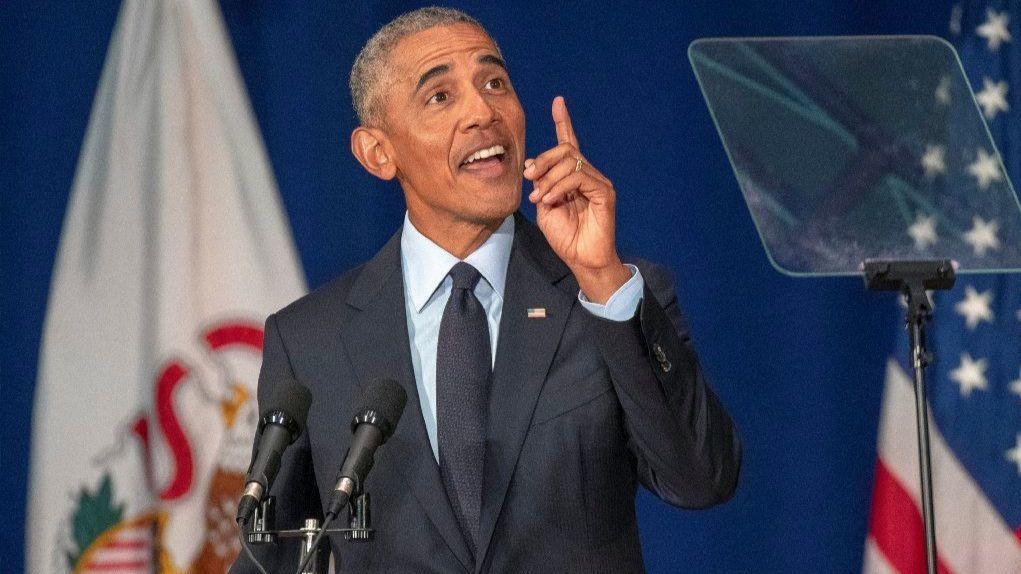 "And remember when I said, 'If you like your plan, you can keep your plan'?"

Obama = a son of Satan

13 posted on 09/14/2018 12:15:37 PM PDT by antidemoncrat
[ Post Reply | Private Reply | To 1 | View Replies]
To: GOPJ; bitt; SunkenCiv
Obama’s self-reverential "comeback" speech was crammed with revisionism. Valerie musta burned the midnight oil trying to paper over Obama's most egregious acts. The most jaw-dropping contention was backtracking his record on free speech: “I complained plenty about Fox News,” the scandal-ridden Obama explained, “but you never heard me threaten to shut them down, or call them ‘enemies of the people.’”

N-o-o-o-o, he didnt do that....he just unleashed the full force of the DOJ, in the person of AG Eric Holder to pounce on Fox reporter James Rosen ......
AND to intimidate Rosen's family
.Holder and Obama issued a court order for Fox News reporter James Rosen's emails,
labeling Rosen a criminal "co-conspirator" under The Espionage Act.

The Justice Department did more than seize a Fox News reporter’s emails while suggesting he was a criminal “co-conspirator” in a leak case — it did so under one of the most serious wartime laws in America, the Espionage Act. It is now well known that the Obama justice department has prosecuted more government leakers under the 1917 Espionage Act than all prior administrations combined - in fact, double the number of all such prior prosecutions. But as last week’s controversy over the Obama DOJ’s pursuit of the phone records of AP reporters illustrated, this obsessive fixation in defense of secrecy also targets, and severely damages, journalists specifically and the news-gathering process in general.

New revelations emerged yesterday in the Washington Post that are perhaps the most extreme yet when it comes to the DOJ’s attacks on press freedoms. It involves the prosecution of State Department adviser Stephen Kim, a naturalized citizen from South Korea who was indicted in 2009 for allegedly telling Fox News’ chief Washington correspondent, James Rosen, that US intelligence believed North Korea would respond to additional UN sanctions with more nuclear tests - something Rosen then reported. Kim did not obtain unauthorized access to classified information, nor steal documents, nor sell secrets, nor pass them to an enemy of the US. Instead, the DOJ alleges that he merely communicated this innocuous information to a journalist - something done every day in Washington - and, for that, this arms expert and long-time government employee faces more than a decade in prison for “espionage”.

The focus of the Post’s report yesterday is that the DOJ’s surveillance of Rosen, the reporter, extended far beyond even what they did to AP reporters. The FBI tracked Rosen’s movements in and out of the State Department, traced the timing of his calls, and - most amazingly - obtained a search warrant to read two days worth of his emails, as well as all of his emails with Kim. In this case, said the Post, “investigators did more than obtain telephone records of a working journalist suspected of receiving the secret material.” It added that “court documents in the Kim case reveal how deeply investigators explored the private communications of a working journalist”.

But what makes this revelation particularly disturbing is that Obama's DOJ, in order to get this search warrant, insisted that Fox's Rosen - a journalist - committed serious crimes. The DOJ specifically argued that by encouraging his source to disclose classified information - something investigative journalists do every day - Rosen himself broke the law. Describing an affidavit from FBI agent Reginald Reyes filed by the DOJ, the Post reports [emphasis added]:

“Reyes wrote that there was evidence Rosen had broken the law, ‘at the very least, either as an aider, abettor and/or co-conspirator’. That fact distinguishes his case from the probe of the AP, in which the news organization is not the likely target. Using italics for emphasis, Reyes explained how Rosen allegedly used a ‘covert communications plan’ and quoted from an e-mail exchange between Rosen and Kim that seems to describe a secret system for passing along information. . . .

However, it remains an open question whether it’s ever illegal, given the First Amendment’s protection of press freedom, for a reporter to solicit information.

No reporter, including Rosen, has been prosecuted for doing so.”

Under US law, it is not illegal to publish classified information. That fact, along with the First Amendment’s guarantee of press freedoms, is what has prevented the US government from ever prosecuting journalists for reporting on what the US government does in secret. This newfound theory of the Obama DOJ - that a journalist can be guilty of crimes for “soliciting” the disclosure of classified information - is a means for circumventing those safeguards and criminalizing the act of investigative journalism itself.

These latest revelations show that this is not just a theory but one put into practice, b/c the Obama DOJ submitted court documents accusing a journalist of committing crimes by doing this.—SNIP—

I used to believe that.

But I don't any more.

No spawn of Satan would be so incredibly incompetent.

16 posted on 09/14/2018 12:26:39 PM PDT by Ohioan
[ Post Reply | Private Reply | To 15 | View Replies]
To: rogerantone1
His talk at the University of Illinois on Friday contained all of the divisive rhetoric that he and the mainstream press accuse President Trump of engaging in.

A man who loves his country doesn't try to divide it and set it against itself at every turn.

Obama To Supporters: "Argue With Friend and Neighbors Get In Their Face!" video

Obama On GOP Running On Repeal: 'Go For It' video

President Obama, No One in Arizona is Laughing video

Obama, during his private pep talk to Democrats, ... asked, "Does anybody think that the teabag, anti-government people are going to support them if they bring down health care? All it will do is confuse and dispirit' Democratic voters "and it will encourage the extremists." - Nov. 7, 2009

Jan Brewer: We Found Out the Obama Was Turning Us In To the UNHRC on Internet (video)

Top 5 Most Violent Obama Quotes Ever Including - "If they bring a knife to the fight, we bring a gun, because from what I understand, folks in Philly like a good brawl." (video)

Obama Tells GOP "They Can Come For The Ride, But They Have To Sit In Back" (video)

A President who uses his bully pulpit to mock and taunt Americans, who incites his followers to be confrontational, creates an atmosphere of incivility and violence.

LORD OF THE FLIES

Dr. Rafael Espinanzo, who was entrusted with former First Lady Michelle Obama’s care during the 2008 presidential election, is speaking out about something he feels the public needs a definitive answer on. With all the talk about Mrs. Obama once being a man, Espinanzo felt he couldn’t keep his mouth shut any longer:

“I Know what I saw. Michelle Obama is not a woman who used to be a man. Michelle Obama is just a man with breast implants and a huge shaving bill. On the campaign trail, no medical staff were allowed to go near her other than to take vitals if she got sick, which she never did.

I know what I know because I walked in on her…err…him…while he was taking a leak standing up in a bathroom in Trenton. They paid me millions for my silence but after seeing what they did to this country I just can’t keep quiet. Let them sue me.”
Sue them they will, says Obama spokesman Art Trubolls:

“Whatever information the doctor has is privileged. Should he decide to trade his license and every dime he’s ever made for a few minutes of fame, so be it.”
There was no direct denial of Dr. Espinanzo’s accusations.

NOw you gotta wonder who the kids really are?