Bump [Philip Bump, WaPo] quotes Ford as telling the Senate Judiciary Committee, “I did see Mark Judge once at the Potomac Village Safeway after the time of the attack, and it would be helpful with anyone’s resources if – to figure out when he worked there if people are wanting more details from me about when the attack occurred.”

Now Bump announces his Eureka moment. He can pinpoint Ford’s timeline thanks to Mark Judge himself.

Bump quotes from Judge’s 1997 book “Wasted.” Judge wrote, “It was the summer before senior year, and by now, even though I wasn’t drinking every day, I was completely hooked.” That summer was 1982.

Bump adds more detail, quoting from Judge on how his drinking began to interfere with his work.

“My job was simple. People would leave their grocery baskets against a rail in front of the store, then pull their cars around. I would then sling their groceries in the car, sometimes get a small tip, and then wait for the next car.”

Bump then turns back to Ford and quotes her response to a question from Sen. Dick Durbin, “I was going to the Potomac Village Safeway, this is the one on the corner of Falls and River Road.” Impressively, Ford remembered the exact job Judge was doing.

“And I was with my mother and I was a teenager, so I wanted her to go in one door and me the other. I chose the wrong door because the door I chose was the one where Mark Judge – it looked like he was working there and arranging the shopping carts.”

TOPICS: News/Current Events; US: Illinois; US: Maryland
KEYWORDS: cashill; christineford; dickdurbin; districtofcolumbia; dnctalkingpoint; dnctalkingpoints; markjudge; markjudgebook; mediawingofthednc; partisanmediashills; philipbump; presstitutes; smearmachine; washingtoncompost; washingtonpost Navigation: use the links below to view more comments.
first 1-20, 21-40, 41-42 next last
1 posted on 10/11/2018 7:24:49 AM PDT by RoosterRedux
[ Post Reply | Private Reply | View Replies]
To: All
That little witch and her bff (and the FBI) inserted Kavanaugh and Mark Judge into her story by relying on details in Judge's book.

As has been said, these people are stupid (REALLY stupid).

It's hard to believe that there was a time when you could still get service like this.

Not everything that has changed in America has been for the better, that's for darn sure!

Not to hijack a thread ( I would NEVER do that), but Publix grocery stores still will carry your groceries out to your car - and no tipping allowed.

I knew it. That Safeway wasn’t built until WAAAY after her story — what a creepy liar— needs to be prosecuted.

Wow, I didn’t know that.

It sure seems like more and more nowadays the attitude of the service industry is becoming “Do it yourself!”

I’ve made this argument before, but Ford wishes to know when Judge worked at the store. Apparently he only worked there for three weeks?

According to Ford the event occurred six to 8 weeks prior... The problem with that is the Country club and swimming. Pools officially opened for memorial day (May 31, 1982), and were on limited hours until public schools got out, in mid June. If Judge worked at Safeway any time other than August, her timeline doesn’t work considering she claims to have been wearing a swimsuit. Kavanaugh also has exams the first week of June and then Beach week...so isn’t in town until June 13 and his schedule is filled with dates thereafter. The dems grabbed onto the July 1 date which even Fords team debunked.

So work backwards...for this to be plausible theres a very narrow window he could have worked at the Safeway, counting back 6-8 weeks.

The “luxury” grocery store I worked as a teenager couldn’t exist today.

They had checkout people, baggers then they would have another crew taking grocery carts outside, under cover like a hotel entry where 6 cars or so at a time had staff filling the trunks.

No joke, I think there were 6-10 people just doing that after the baggers were done.

It was a big operation.

I cringed every time a reporter referred to her as a “credible” witness yet refused to address the inconsistencies and omissions of her testimony. And the media considers itself to be reporters? I get far better insight just by reading comments posted by readers than I do from professional reporters.

9 posted on 10/11/2018 7:40:26 AM PDT by Boomer One ( ToUsesn)
[ Post Reply | Private Reply | To 1 | View Replies]
To: PittsburghAfterDark
The “luxury” grocery store I worked as a teenager couldn’t exist today. They had checkout people, baggers then they would have another crew taking grocery carts outside, under cover like a hotel entry where 6 cars or so at a time had staff filling the trunks.

I believe something happened to her with a boy, probably nothing more than a seduction attempt that struck out and she fantasized and filled-in the rest, including naming the boy Brett Kavanaugh because she had a teenage crush on him. I also believe someone got her a copy of Judge’s book “to bolster your memory” and she then integrated facts from it into her narrative to make it more believable.

After all, who would you be more likely to believe, someone who couldn’t even recall the exact year, or someone who could nail it down specifically? By adopting part of Judges story as her own, Ford thought she was enhancing her own crediblity when in fact it had just the opposite effect.

13 posted on 10/11/2018 7:51:45 AM PDT by bigbob (Trust Sessions. Trust the Plan.)
[ Post Reply | Private Reply | To 1 | View Replies]
To: RoosterRedux
The problem is her best friend who was supposedly with Ford the day of the ALLEGED attack said she didn't even know Kavanaugh.

I believe Ford assumed that since her friend knew Judge, she could extend the fairy tale to include Kavanaugh. Nice try...no cigar....DA

“I would then sling their groceries in the car, sometimes get a small tip, and then wait for the next car.
It’s hard to believe that there was a time when you could still get service like this.”

In high school I had a job at an upper-end mom and pop grocery where there was a only a sidewalk between the front door and a two row parking lot.

Loved the little old ladies who’d tip me a buck to carry their groceries a total of 30’.

Really?! Has that info been published?

If not, that is a big scoop. I think that info is not well-known, or it should have been included in this article.

You can email tips the the author of this article. His email link is at the top of the article next to his name.

It was published at the time of Ford’s testimony.

Problem was, she never really identified when her attack occurred. It was from sometime in the early 870" to mid-80's.

Do you recall the date that Safeway was opened.

Ford’s best buddy,Kaiser, was married to Bob Beckel for 10 years. It is all incestuous with the Dems. 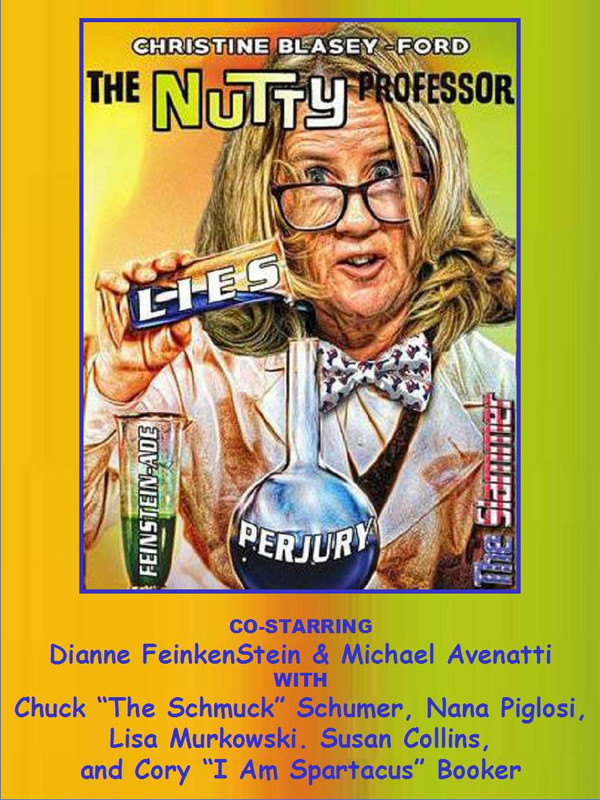