Over at the Institute for Family Studies, Nicholas Wolfinger, a sociologist at the University of Utah, has found that Americans who have only ever slept with their spouses are most likely to report being in a “very happy” marriage. Meanwhile, the lowest odds of marital happiness—about 13 percentage points lower than the one-partner women—belong to women who have had six to 10 sexual partners in their lives. For men, there’s still a dip in marital satisfaction after one partner, but it’s never as low as it gets for women,...

In an earlier analysis, Wolfinger found that women with zero or one previous sex partners before marriage were also least likely to divorce, while those with 10 or more were most likely. These divorce-proof brides are an exclusive crew: By the 2010s, he writes, just 5 percent of new brides were virgins. And just 6 percent of their marriages dissolved within five years, compared with 20 percent for most people.

Other studies’ findings have also supported the surprising durability of marriages between people who have only ever had sex with one another.

In this latest study, women who have had one partner instead of two are about 5 percentage points happier in their marriages, about on a par, Wolfinger says, with the boost that possessing a four-year degree, attending religious services, or having an income over $78,000 a year has for a happy marriage. (In his analysis, he controlled for education, income, and age at marriage.)

This analysis merely suggests that sleeping with fewer people is correlated with marital happiness; it doesn’t say one thing predicts the other.

Well, uh, yeah, marriage has been a one-on-one arrangement, other than the multiple wives that are found throughout the Old Testament.

It’s amazing how that works

Quite a keyword display for five posts

We sleep in separate rooms, we have dinner apart, we take separate vacations – we’re doing everything we can to keep our marriage together.

So this is why Bill and Hillary are miserable people who despise the world and hate everybody. Makes perfect sense.

The multiple wives in the Old Testament were not directed by God and were shown to cause a world of hurt.

Only way for guys to avoid world of hurt is to not get married. Take Paul’s advice and stay awsy from women.

That’s NOT a “marriage”;nor is it clever or “funny”. 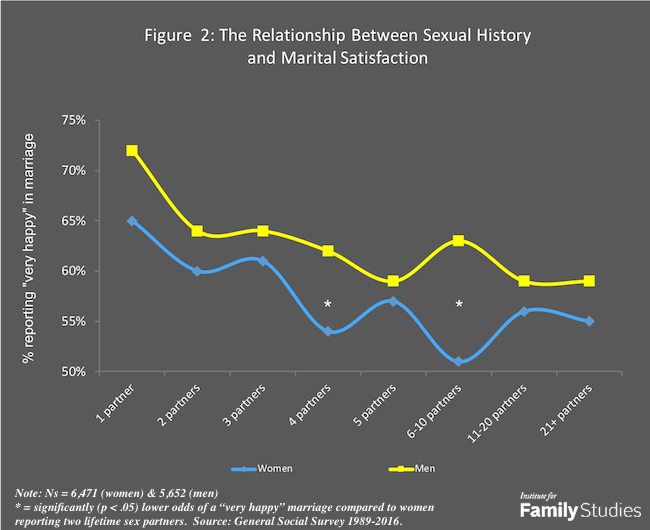 They probably should have created a longer headline - it made me think, “Well yeah, but what about BEFORE marriage?”

Abraham screwing Hagar caused a world of hurt, though.

And Solomon's wives kinda screwed him over, too.

“other than the multiple wives that are found throughout the Old Testament.” Right, and there isn’t a one of those situations that lead to a healthy family life. Cautionary tales all!

though multiple wives were never prohibited by the bible. it is a stretch to claim that a capsule summary of a poly person’s life equates to a prohibition on that person’s lifestyle. this amounts to an interpretation by a person external to the words of the bible itself. everyone has an opinion.

Now you tell me!

17 posted on 10/22/2018 10:32:06 PM PDT by lee martell (AT)
[ Post Reply | Private Reply | To 1 | View Replies]
To: Theoria
That’s a very interesting graph. It seems a weird divergence between men and women happens at around 6-10 partners, making men more likely to report a happy marriage and women less likely, before converging at 11-20 partners.

I know correlation is not causality, and the article itself hints at that, but it is still interesting data. Many things could be driving the results though ...ranging from solid morals coupled with the married pair having the same set of good values (a key indicator for a good marriage), all the way to something most people don’t like to discuss, which is choice. The more choice a person has the more likely he or she (but mostly for men since a woman who’s not good looking can still have many men) will have multiple partners ...unless, of course, one adds the aforementioned good moral values. It would be great to see an analysis that also controls for looks/confidence ...I think we can all recall colleagues in high school and college who were virgins, but not out of moral standards/choice.

Redundant study. That’s been a known fact for millennia..n