TIERRA VERDE — Judson Kidd and James Donovan are a gay couple with an adopted black son. From the day they moved into their waterfront house last summer, they never felt welcomed in the conservative, overwhelmingly white community of Tierra Verde.

Neighbors never waved or introduced themselves, they said. One mother yanked her daughter away when she started to play with 2-year-old Van. Then came Halloween, and the disturbing decorations at the big house up the street.

The yard had been transformed into a graveyard. "CNN,’’ was written on one white cross, with a gruesome gray skull at its base. Other crosses bore the names of Democrats Hillary Clinton, Nancy Pelosi and Chuck Schumer. A firepit contained a jumble of bones and a cross marked "George Soros,’’ the Jewish billionaire who supports liberal causes.

All had been critics of President Donald J. Trump.

Kidd was so appalled that he took to Nextdoor, the social media site on which residents of a neighborhood can post messages, whether offering items for sale or reporting suspicious behavior. Kidd’s message was more pointed.

"This is pathetic," he said of the graveyard display. "Can’t we take the politics out of Halloween?"

That elicited a quick response: "You’re disgusting. If you don’t like it why don’t you move."

Since then, a long string of comments has reflected the nation’s deep divides leading up to Tuesday’s elections. Some posts supported Kidd. Others strongly defended the graveyard.

That made Kidd and Donovan wonder: Is this a neighborhood where we want to raise our black son? Could he be the object of racist taunts or worse as attitudes become even more hardened and polarized?

"People hear things from the president and think, ‘If the leader of the free world says it, it’s OK,’" Kidd said. "Even my rhetoric has amped up, not that I’m proud of it. But this is the world we live in today."

Now in their early 40s, Donovan and Kidd have been together for 15 years.

Donovan came out just after the Sept. 11 attacks. Then working on Wall Street, he was getting his shoes shined near the World Trade Center when the first plane hit. He saw people jumping from 100 stories up and realized: Life is short. It was time to acknowledge he was gay.

Soon afterward, Donovan’s employer transferred him to Texas. He met Kidd, who had just graduated from Southern Methodist University, in a gay bar in Dallas. Over the following years they moved frequently as they married and advanced in their careers — Donovan as a media executive who once worked for CNN’s parent company; Kidd in banking, then as a Realtor.

Four years ago, they settled in the Tampa Bay area. They had a vacation cottage on Anna Maria Island — "Everybody there loved having gay friends," Kidd says — and a waterfront house in northeast St. Petersburg, known as one of the nation’s most gay-friendly cities. When the couple adopted Van, neighbors cooed at the baby and brought over gifts.

This year, Kidd found an attractive deal on a larger house in Tierra Verde with a prized view of Boca Ciega Bay. As they were moving in last July, two children, no older than 7 or 8, appeared with signs sporting Trump’s "Make America Great Again" slogan.

No one stopped by to say hello.

"This is the most unwelcome I’ve ever felt," Kidd said, "We’ve live in all kinds of Deep South states and in all those situations, I was surprised at how considerate people were. In Little Rock, Arkansas, it was pure Southern hospitality."

Several days before Halloween, Donovan was riding his bike when he saw the mock graveyard. In addition to the Clinton, Pelosi, Schumer and CNN signs, one grave was marked "Socialism" and another "Pocahontas" — Trump’s nickname for Sen. Elizabeth Warren — with a severed head nearby. Donovan was also struck by the tiki torches burning next to white crosses and signs that said: "Stay Away.’’

The graveyard seemed to be a message to all those who weren’t straight, white Trump supporters.

Kidd called the Tierra Verde Community Association and sent photographs. He heard nothing. That’s when he posted on Nextdoor and prompted the response so offensive that it was taken down. But there were dozens of other comments:

Oh, dear. Whatever happened to having a sense of humor. No, Halloween isn’t just for kids and God Bless the First Amendment. If a sign intimidates you, go to your safe place.

I’m guessing that it wasn’t your neighbor’s intent for you to feel uncomfortable and if it was, who cares. Be grateful you can afford your home. The are plenty of people who can’t afford a home at all.

Just remember, you moved here and those tiki torches probably were here before you.

There were postings in support, too.

I agreed with you Mr. Kidd. Our society has become increasingly coarse and aggressive. The adults are acting like children.

Putting the name of a living person on a gravestone implies you want them dead.

The nation is split and that includes Tierra Verde. This gallows humor is an insult to other neighbors and confusing to children who we want to teach that we are all Americans with values.

The white nationalists who held their rally in Charlottesville last year used tiki torches as they marched around chanting "Jews will not replace us" and other, much worse anti-Semitic chants.

Also joining the online conversation Sharon Rhoads, the homeowner with the graveyard. She cited her charitable work and her adoption of two orphaned children from Guatemala.

My husband and I hate NO ONE, she wrote. We teach our children that we are all ALL God’s people and we love them all — men, women, LGBT, black, white, Hispanic, Christian, Jew. Our graveyard was simply political satire designed to target that with which we do disagree, WHICH IS SOCIALISM.

Rhoads invited Kidd to have coffee, which he declined. That prompted more Nextdoor comments, some of which criticized him for not meeting with her.

"With that stuff in her yard, I’m not setting foot on her property," he said.

Rhoads did not respond to a call for comment. The Tierra Verde Community Association said it had no comment on the controversy over her Halloween decorations.

At first, Kidd and Donovan were so concerned about the graveyard and some of the postings on Nextdoor that they decided to sell the house and move. Then neighbors invited them to Halloween parties. Others thanked them for speaking out. Perhaps Tierra Verde was not quite as unfriendly as they thought.

They are going to stay, for the time being at least.

TOPICS: Culture/Society; News/Current Events; Politics/Elections; US: Florida
KEYWORDS: halloween; homosexual; homosexualagenda; safespace; snowflake Navigation: use the links below to view more comments.
first 1-20, 21-40, 41-60, 61-80 ... 121-133 next last
From "Pravda On The Bay":

A tale of The Perpetually Offended.

Aging homosexual Snowflakes get their panties in a wad over Halloween graveyard humor. 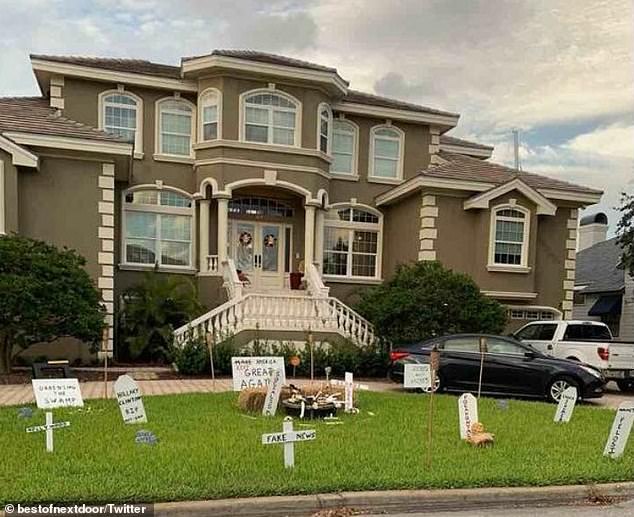 O you poor baby snowflakes. And it’s all that evil Trumps fault. His racist rhetoric, ya know.

No sweetheart. You started this, we will finish it!

People in the South may be polite, but I’ll wager they don’t want a “married” homosexual couple in their neighborhood, and they feel sorry for the poor kid.

Rag is owned by something called the Poynter Institute. Anyone know anything about Poynter?

7 posted on 11/03/2018 7:23:14 AM PDT by mewzilla (Is Central America emptying its prisons?)
[ Post Reply | Private Reply | To 1 | View Replies]
To: Vlad The Inhaler
And more importantly, when the creators of the Halloweeen decoration invited them over to chat in person - as fellow parents of adopted children - the two Snowflakes displayed their true character by refusing the invitation.

That tells you all you need to know. Instead of accepting an invitation to visit, and learn that in fact their neighbors couldn't care less about their lifestyle, they chose to make a political issue out of it.

And they did that knowing it would be likely to cause their own child to be left out of the community. Selfish and dumb.

Seriously, why do we need to have every sodomite article posted on this site. What does it add to the overall purpose for FReeRepublic’s existence?

Newsworthy, no. Family friendly, no. Edifying to the members, no.

And Social Welfare just hates to keep track on or stats of the harm the little boy may face.

Get over yourselves. The owner of that house invited them over for coffee, they refused to go. I guess they feel more comfortable complaining vs accepting the Olive Branch offered to them both. Fine. Just don’t say nobody reached out, b/c this lady just did and was rejected. Enjoy your little Pity Party.

Most homosexuals are dead before they reach 50 years of age. It is not a lifestyle where those engaging in it should be preaching morals. Yet that is what this article is attempting to do. Degenerate fudge packers complaining and moralizing about a neighborhood that does not condone their behavior.

Speaking of civility, I know what would happen to my car, with the MAGA sticker on it, if I parked it on any street in NYC.
These cry babies only had their feelings hurt. Nobody harmed them, attaked them or spoke to them in a threatening way.

I wasn’t expecting that response on FRepublic, but it made me LOL.

Making drama and 15 minutes of fame.

After this little performance they will be shunned totally.

18 posted on 11/03/2018 7:41:33 AM PDT by Chickensoup ( Leftists fascists today plan to commence to commit genocide against conservatives soon)
[ Post Reply | Private Reply | To 1 | View Replies]
To: Vlad The Inhaler
Their side is so polite and is never in our face or violent!

I live in the South. I am polite. As long as neighbors keep the outside of their home in good repair, don’t block my driveway, keep the noise level down and are law abiding citizens, I don’t care about the personal life of the people living next to me.