FRANKFURT (Reuters) - A user of Amazon’s Alexa voice assistant in Germany got access to more than a thousand recordings from another user because of “a human error” by the company.

The customer had asked to listen back to recordings of his own activities made by Alexa but he was also able to access 1,700 audio files from a stranger when Amazon sent him a link, German trade publication c’t reported.

“This unfortunate case was the result of a human error and an isolated single case,” an Amazon spokesman said on Thursday.

The first customer had initially got no reply when he told Amazon about the access to the other recordings, the report said. The files were then deleted from the link provided by Amazon but he had already downloaded them on to his computer, added the report from c’t, part of German tech publisher Heise.

So behind every command entered is a human receiving that command, and then silently parsing it and executing it ?

We’re moving into 2019. Human beings know more about computing than this. This excuse may have worked in 1959 but not now.

They think we are idiots.

Only the government is supposed to get those links.

People will voluntarily put “Big Brother” devices in their homes, so everything audible (and with the next device, visible) can be transmitted and recorded at some unknown central facility??!!

1984 took awhile longer but Orwell was a prophet.

That’s what Alexa is for ,D’oh

I’m hoping the day that Alexa type devices are standardized in every workplace is still far off. I know that’s already happening in some higher level jobs, or silicon valley type occupations, but I’m speaking of jobs that pay $45K a year or less.

Alexa should be named Trojan Horse.

Every smart phone, laptop, computer with a microphone can be remotely turned on

Amazon is the same company who is so disconnected from the slave-people that during a strike at a fulfillment center, when employees asked for air conditioning because it was too hot the company responded...

“The robots work better in the warmer temperatures”

This company needs to be stopped. And it’s easier than fighting the Chinese but at some point it won’t be so easy. Amazon is going to buy shipping companies - you just wait and see. Then all shipping will go through them.

Same thing happened to me a couple of years ago. I heard phrases like:

“Huma, help me shred these files.”
“Huma, do you think we should whack Bernie?”

I never did figure out who it was. 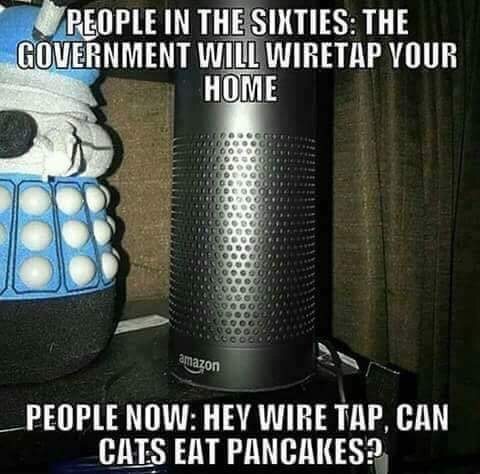 Evidently, a lot of folks are.

People buy those transmitters and install them every day, thinking it makes life easier, or more convenient, or whatever. But it’s also recording and storing, and monitoring.

Not worth your privacy just because it’s the latest fad.

The real problem is Amazon keeping...period. That’s all you need to know.

People who volunteer their DNA and happily put listening devices in their home baffle me.

I have no social media accounts and enjoy all the data breaches I read about.

It’s not really hidden. In the interface you can play back your previous messages. It only stores stuff you say when you say ‘alexa….’ though. It’s not always listening because people have looked at the packets coming out of it and they truly only send a signal when you want them to.

I wouldn’t have one of those near me. When I get a new laptop the first thing i do is tape over the camera.

I’m building a system based on Person of Interest and I agree.

Some of the nicest, kindest and most sincere people I have met are offering my company millions to anonymously listen in on people. They ask this without any predication or iota of internalized questioning. They think they should have it because they care.

My jaw has DROPPED at some of the requests I’ve had coming from some very important, well-known people. Again, good people but they have zero grasp on the concept of privacy. It simply never existed to them and they feel 100% that no one should object to their prying.

The world is a strange place. I want liberals eliminated and remembered as the biggest strife to mankind, but I can also understand how they are born. Neurons don’t fire.