The false promise of “safe, legal, and rare” made living with the evil of abortion seem tolerable to so many Americans. Cut to thunderous applause (minute 1:18) in New York over legislation making it common and profitable, all the way up until the moment of birth.

As noted by The New York Times: “if liberal social policies really led inexorably to fewer unplanned pregnancies and thus fewer abortions, you would expect ‘blue’ regions of the country to have lower teen pregnancy rates and fewer abortions per capita than demographically similar ‘red’ regions…But that isn’t what the data show…liberal policies don’t always seem to deliver the ‘rare’ part.”

The grand jury report in the Dr. Kermit Gosnell case explained the dilemma facing the late-term abortion doctor: “Babies that big are hard to get out. Gosnell’s approach, whenever possible, was to force full labor and delivery of premature infants on ill-informed women…When you perform late-term ‘abortions’ by inducing labor, you get babies. Live, breathing, squirming babies. By 24 weeks, most babies born prematurely will survive if they receive appropriate medical care…Gosnell had a simple solution for the unwanted babies he delivered: he killed them. He didn’t call it that. He called it ‘ensuring fetal demise.’”

“Ensuring fetal demise,” is exactly what Northam described. In a world that made sense, a governor channeling Gosnell’s morality would be a source of shame and revulsion to the party that put him in power. Implausibly, one couldn’t find a Democrat who would admit to even hearing his shocking admission. Not until this governor committed a much greater sin: he appears to have posed in a racially insensitive costume in the 1980s.

An ex-classmate released the photo to trigger the outrage that the liberal public should have felt over his abortion remarks. Among the intelligentsia, no leftist dare express individual outrage at even the most outrageous abortion practice. The sheep-white-clad congresswomen attending the State of the Union address, for example, displayed the real reason for this silence, as they furtively looked to each other for cues on whether to sit in outrage or stand in applause. None would react until she felt the safety of the herd. You know, like leaders do.

A thousand miracles must cascade just right to organize specks of organic matter into the noble human form. Between 20 percent and 51 percent of the time, something goes wrong and a pregnancy ends in miscarriage. A trillion miles of cold merciless death and vacuum in every direction surround our sanctuary where flawed humans are sometimes blessed to exercise the gift of participating in a creation process that nobody fully comprehends.

For many, the sight of a baby stokes unfulfilled longing, the missed opportunity of fleeting youth to bring a soul down from heaven to walk among us. Infertile couples, gay couples, single wannabe parents are all powerless to claim their heart’s desire from wanton destruction of for-profit abortion mills.

What to do with an unwanted baby? There’s no such thing. In every state in the union, a new mother can take her new baby to a hospital or police station and just walk away from whatever shame and regret she might attach to the newborn, no questions asked. They’re called infant safe haven laws, and they work as intended, encouraging mothers to leave their children with people who can find better outcomes for those children instead of abusing or abandoning their babies.

In eight states — Alaska, Colorado, New Hampshire, New Jersey, New York, Oregon, and Vermont — it is legal to abort at any time until the baby draws her first breath. What benefit is it to the outcome of the mother to abort the baby moments before delivery when, seconds later, she can hand off the baby, never to be responsible for it again?

While some marriages end in murder, murder is never the right solution to expel the unwanted. The gruesome abortionist Kermit Gosnell silenced hundreds of babies born alive with his scissor snips to the spine. He argued at his trial that the character of what he did to babies born alive is no different that the sanctioned abortions of identical babies still inside their mothers.

In Pennsylvania, where Gosnell killed these babies, the mother had a full 28 days to give the baby to any hospital in Pennsylvania––no questions and no consequences if she just let the baby live. Just find a doctor or medical professional who isn’t performing an abortion, and the baby’s life can be spared without burdening a reluctant mother.

Is it about money? About profit? Let potential parents bounty any abortion doctors who guide mothers to end their shame with a priceless gift instead of a dark act. Imagine a world where an abortion doctor received a fee for connecting adoptive parents to a baby who needs parents. Laws would have to change, but the social benefit would be incalculable. When that day comes, I’ll write the first ransom check.

Adam Mill is a pseudonym. He works in Kansas City, Missouri as an attorney specializing in labor and employment and public administration law. Adam graduated from the University of Kansas and has been admitted to practice in Kansas and Missouri. Check out Adam’s new novel on Kindle, "Recrudescence." It's the story of a Kansas graduate student who discovers a hidden Greek oracle.
TOPICS: Constitution/Conservatism; Culture/Society; News/Current Events
KEYWORDS: abortion; adoption; infanticide; trends Navigation: use the links below to view more comments.
first 1-20, 21-35 next last
1 posted on 02/08/2019 10:18:57 AM PST by SeekAndFind
[ Post Reply | Private Reply | View Replies]
To: SeekAndFind
OR they could fill the bank account of Planned Parenthood and the Ba'al worshiping progressives.

Some sources estimate that there are about 2 million couples currently waiting to adopt in the United States — which means there are as many as 36 couples waiting for every one child who is placed for adoption.

It is sick. God weeps. We deserve what’s coming.

They could also not get knocked up in the first place, or an even more radical suggestion, they could get married and have a family. Instead, they whore around for their youth, then “mature” into spending their waking hours in a cubicle, putting data into spreadsheets as a “career”, and go home at night to feed the cats and drink a liter of wine.

Instead of aborting (killing the baby), induce labor to produce a living child, to be taken into a family by those who want children. “Mother” gets rid of unwanted child, child gets a life, family gets a child. Win-win-win.

That is a demographic who do not vote their way.

7 posted on 02/08/2019 10:28:45 AM PST by Salman (Democrats. The other religion of peace.)
[ Post Reply | Private Reply | To 1 | View Replies]
To: cdcdawg
“mature” into spending their waking hours in a cubicle, putting data into spreadsheets as a “career”, and go home at night to feed the cats and drink a liter of wine.

Instead of aborting (killing the baby), induce labor to produce a living child, to be taken into a family by those who want children. “Mother” gets rid of unwanted child, child gets a life, family gets a child. Win-win-win.

Any young woman would no doubt be horrified if their dog was having puppies and someone was killing them as they were born but somehow that is okey-dokey to them when it is their own offspring.

And I think we should eschew the language of the left.

I’m expecting some type of calamitous natural disaster event to strike somewhere in the heart of these abortion mills.

“-———or an even more radical suggestion, they could get married and have a family.”

There are millions of people across the country who should never have married and had a family.

Marriage and kids isn’t for everyone.

Think if this......these full term babies are viable for life, the “mothers” body has already gone through the months of preparing for birth, the infant, dead or alive, will almost always come through the birth canal. So why not let it be born ALIVE and simply WALK AWAY, JUST WALK OUT OF ITS LIFE.

I suspect many would have sever problems (alcohol, drugs, inbreeding, STD's).

We used to sterilize certain individuals - now we abort.

Yes, people are so happy in this new paradigm. Especially modern women. A few more gallons of wine, a few more cats, a little less interest on Tinder. Pure Bliss.

just so long as it is not a single culture couple, different than the culture of the baby... the little tyke could grow up not knowing what culture to find offensive.

How will the little tyke learn that race (culture) is not a basis for decisions...except that it is...

Kids have to be carefully taught (South Pacific)...

16 posted on 02/08/2019 10:42:25 AM PST by petro45acp (All those disopian movies? applefacebookgoogletwitteryahooutoob....you are the bad guys!)
[ Post Reply | Private Reply | To 1 | View Replies]
To: SeekAndFind
Mothers Are Killing Babies Who Could Fill The Empty Arms Of Millions Of Waiting Loving Couples

A related travesty is the expense and bureaucracy associated with the U.S. adoption 'business'. Loving couples willing to adopt should be incurring little to no cost and not be required to jump through bureaucratic hoops and circles. The government is willing to spend tons of money keeping these children in orphanages until they are adults but make it very difficult cost and otherwise for willing couples to adopt. Many adopt kids from other countries because our system is so difficult and expensive. 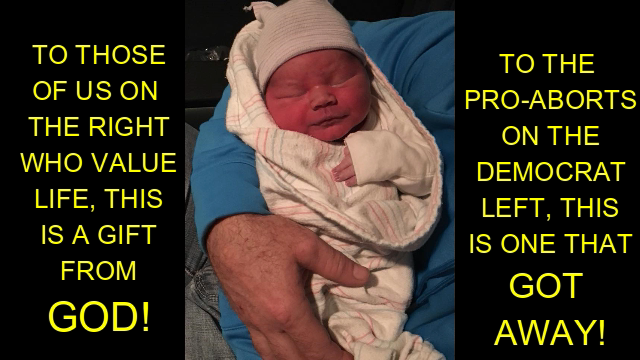 Two points about that graphic:

1. How about we exercise the restraint necessary to prevent the unwanted conception that leads to the killing of unwanted human beings? And, yes, it IS KILLING!

And the ladies are going to come after me for this, but the fact is that, except in cases of forced rape, THEY ARE IN CONTROL OF EVENTS! Years ago, a wag offered that unwanted pregnancies could be prevented by ASPIRIN! How? Put the pill between your knees and be certain it stays there! Of course the Hollywood trash merchants have spread the message that leg spreading is no big deal in HBO TV garbage such as “Sex in The City” in which bed-hopping bimbos try to outdo one another.

2. That said, the current birth rate among native born Americans is at a level far below that historically necessary to preserve the traditional culture of a nation. Looking at that from the perspective of the One World Globalist Left, their CONSCIOUS importation of alien cultures here is the most certain way to DESTROY the traditional INDIVIDUAL LIBERTY based IDEA of AMERICA embodied in the Declaration and Constitution. That they seek to destroy it bespeaks a level of hatred of that IDEA engendered by their realization that it MUST be destroyed before THEIR socialist "Utopia" (a euphemism for "communism") can be implemented here.

That that has ALWAYS failed and killed hundreds of millions is of no concern to them so long as THEY ascend to and remain atop the piles of corpses.

Little corpses, big corpses...they're all the same to these people so long as they get a shot at yet another doomed to fail experiment in their communist "Utopia".

Please think about that when you next enter a voting booth!

You know, it kind of makes me think Ocasio-Cortez is onto something with the notion that the earth is about to be destroyed. Though not because of global warming. Because, like in the time of Noah, humanity has become genuinely evil.

“Yes, people are so happy in this new paradigm.”

Some are VERY happy in this paradigm,which isn’t exactly new.

There have been people around for years who chose not to marry -—and some of actually them even have dogs.