“On both sides it should be called out,” she said about hate crimes in the US.

“And just because I don’t technically have Jewish family that are blood-related to me doesn’t mean that I don’t take this as seriously, and it is very dangerous, very dangerous. … What Ilhan Omar is saying is very scary to me,” she said.

Enlarge ImageMehdi Hasan Mehdi HasanTwitter “And it’s very scary to a lot of people, and I don’t think you have to be Jewish to recognize that.”

But Omar defiantly lashed back by retweeting a post by Medhi Hasan, an Intercept columnist and Al Jazeera host, just hours after the House voted in favor of an anti-hate resolution that was initially inspired by the Somali-born lawmaker’s anti-Semitic comments.

“Meghan’s late father literally sang ‘bomb bomb bomb Iran’ and insisted on referring to his Vietnamese captors as ‘g—ks,’” Hasan wrote, referring to the Arizona senator, who died in August at age 81.

“He also, lest we forget, gave the world Sarah Palin. So a little less faux outrage over a former refugee-turned-freshman-representative pls.”

I hope Omar keeps on keepin’ on. It is obvious that a major schism is developing in the ‘rat party.

Meghan’s late father literally sang ‘bomb bomb bomb Iran’ and insisted on referring to his Vietnamese captors as ‘gooks’. He also, lest we forget, gave the world Sarah Palin.

Wow. This jihadist is bad news. And she’s got nerve.

Has anyone yet asked the jihadi congress critter if she strongly renounces David Duke, now that he has praised her?

Meghan will eat her alive.

So where is the investigation of collusion with terrorists?

In trying to get their deadly enemy, Trump, the Deepsters have turned the entire Democratic party into a clown circus. 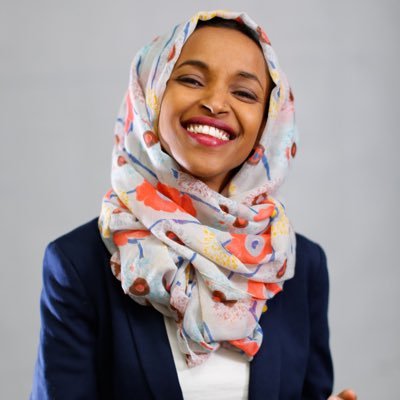 Omar sure is a piece of work. Only thing I’ll give her is that she’s probably the most honest democrat.

Well, I guess the Dems really taught her a lesson. The Dems will do more “foot stomping” and “teeth gnashing”, but Omar will continue her “loose cannon” act.

“I hope Omar keeps on keepin’ on.”

There’s no stopping her now. She’s been empowered by Pelosi and the Dim leadership. And has the full support of the “Progressive Caucus” and most of the CBC.

Dim Jews in office will have no choice but to do something DRAMATIC.

And it’s going to be damn fun to watch.

I guess the liberals have revoked McCain’s sainthood now that it no longer serves them.

> There’s no stopping her now. She’s been empowered by Pelosi and the Dim leadership. <

Yep. And even if Pelosi read her the riot act, Omar will keep on truckin’ anyway. She won’t be able to help herself. She’s an addict, addicted to hating Jews.

I doubt it. I imagine only Muslims can get anywhere near her or her people. People better wake up, fast. Radical Muslims have been planning this takeover for decades.

This is exactly what Arabs do all the time in the ME. Many of the local TV interviews are just shouting matches. Its not good clean fun as in the US. There is little to no joking around. Lots of revenge, shame, and in-your-face.
OTO, Meghan McCain was such a depressing pussycat on The View which is a show that puts back the Female cause by about 100 years, she is an easy target for a primped-up Arab reporter having a hissy fit.

18 posted on 03/08/2019 7:37:01 AM PST by malach (We live in interesting times)
[ Post Reply | Private Reply | To 4 | View Replies]
To: Boogieman
So Ilhan and her ilk want to march all of us to the gas chambers. This is where leftwing tolerance of intolerance in the name of tolerance has gotten us.

We have gone way to far down this road and I just don't see this ending well.