It’s been said that those who do not study history are doomed to repeat it. We might want to add to that cliché that sometimes, when it repeats, shoes can be on other feet and tables can be turned. In the midst of the U.S. trade talks with China, an ironic and tragic historical drama is replaying before our eyes.

U.S. Customs and Border Protection agents recently seized the largest amount of fentanyl in history. The confiscation was enough for around 100 million Americans to overdose with and die. Let that sink in.

Two facts give this situation historic irony. Fentanyl is an opiate, and we have reason to believe that most of it comes from China. In the 19th century, England fought a series of wars with China to force Chinese ports to accept the opium trade. American merchants took advantage of the British victory and the Chinese addicts by engaging in the opium trade as well. Franklin Delano Roosevelt’s grandfather amassed his wealth from the trade. Although some American missionaries at first tried to curb the trade, America’s part in this story is our shame.

Of relevance to the present trade talks between our two countries is the moral lesson the Opium Wars offer. China today has the opportunity to do what we failed to do 200 years ago — stem the flow of opium flooding our borders and drowning the hopes of millions of Americans. Further, in 1839 one of China’s own, an imperial officer named Lin Zexu, made a moral argument against the opium trade in a letter to Queen Victoria, and the nobility of Lin’s moral argument is just as compelling today as it should have been in the 19th century.

I’ve used Fentanyl, roxys, oxys and percs, some in very high doses without really getting much of a high. Got a little bit of a high off the roxys.

All I know is that when a 5 dollar copay on a script of roxys can net 5,000 on the street, it’s going to take a lot to stop the trade.

A huge wall would be a great start.

Anyone who doesn’t believe that Drug Cartel cash flowing into congressional coffers isn’t influencing this crapola is living in never never land.

Democrat leaders near the border are fighting against the Wall to their states demise. It’s almost as if they are paid off by cartels to keep the border open for some unknown reason. But money is a powerful reason.

FDR’s dad made his fortune from the Opium Trade in China.

Wow, I didn’t know that.

...FDR’s dad made his fortune from the Opium Trade in China.

Fools make a CHOICE to abuse drugs. No one held them down and forced the needle into their arm, the powder up their nose or the smoke into their lungs. They’ll get no sympathy from me.

There are tiny green pills that have the legend "OC" on one side and "80" on the reverse.

The dosage is not standard, one might make a fellow high and satisfy his need for Heroin for the day and the next could be a serious overdose. 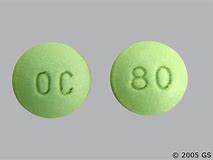 With something this powerful very strict rules of measurement must go into the pharmaceutical compounding to create accurate dosages.

The cretins just don't care...it's likely they just mix the Fentanyl with a buffer compound for a few minutes in a simple mixing device and then run it through an automated pill press....madness

Years ago I was taken to the hospital suffering from the worst pain I have ever experienced, a kidney stone. Whatever they gave me in the ambulance barely took the edge off, but left me still writhing. At the hospital they gave me fentanyl while on a stretcher and shoved me me in the corner. From that point I was on the best vacation I’ve ever had, on the side of a mountain overlooking a deep blue lake surrounded by snow and mountain flowers. No wonder people get addicted to the stuff.

I had the patch and the way they administered it to you is so much more effective.

I DID get a morphine IV and I didn’t get high but I felt NOTHING. What had been horrific pain was GONE. But then it wore off and it was a chronic pain thing so that led to the pills..which I no longer take and didn’t take for that long.

The anesthesia IVs, that few seconds before you pass out, you feel GREAT!

I assume you passed the stone and the pain went away with it!

It’s called the Dorothy moment (Poppy Fields)
That wonderful feeling one gets with their first major narcotic hit
It is highly reinforcing, watch out

This country has an opiate problem in one form or another since the civil war...

Yes yes !
Drug use is a choice!
Of the many many deaths of opiates probably on the order of less than five or involuntary

Good thing you are not a Cardio patient, Fen slows the heart. My Cardio has Blacklisted it after a reaction to the anesthesia version. Morphine is also on his Blacklist for the opposite reason, you feel like your having a Heart Attack with your head going to explode.

Cocaine was originally promoted in the 1870’s as a cure for morphine addiction for veterans who became addicted from their Civil War injuries. That didn’t work out too well.

Until the Pure Food and Drug act was passed in 1933 one could buy morphine and cocaine preparations over the counter. I worked with an old pharmacist back in the 1960’s who told me that prior to 1933 his store sold Elixir of Terpinhydrate with Heroin cough syrup. Yowser!

Why hasn’t anyone given the Air Force the coordinates for the fentanyl factory?

The reason I post "This country has an opiate problem in one form or another since the civil war" is the current addiction problem in this country is always framed that "government" needs to address this new menace, which actually an old problem.