President Trump on Monday seized on a New York University professor’s false tweet as an example of journalistic malpractice while calling for the U.S. to modify its libel laws to hold news media accountable.

In his early morning tweet while on an overseas trip to Japan, the president said a fake quote attributed to him by Ian Bremmer shows “what’s going on in the age of Fake News.”

“People think they can say anything and get away with it,” Trump wrote. “Really, the libel laws should be changed to hold Fake News Media accountable!” 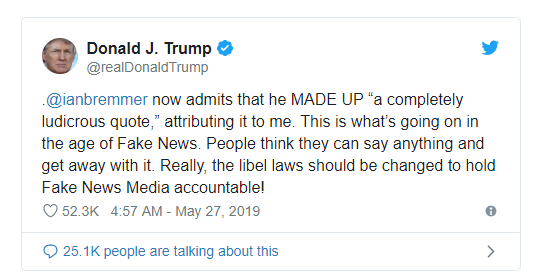 Bremmer, who is the president and founder of Eurasia Group and a political science professor at NYC, got into trouble Sunday for tweeting a fake quote attributed to Trump.

“Kim Jong Un is smarter and would make a better President than Sleepy Joe Biden,” Bremmer wrote in the now-deleted tweet, attributing it to Trump. 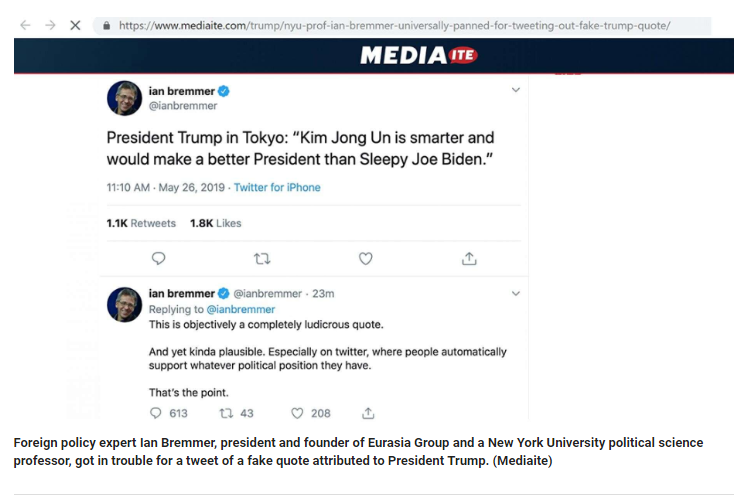 North Korea has labeled Biden a “fool of low IQ” and an “imbecile bereft of elementary quality as a human being” after the U.S. presidential hopeful recently called North Korean leader Kim Jong Un a tyrant during a recent speech.

Bremmer later reportedly responded in a now-deleted tweet: “This is objectively a completely ludicrous quote. And yet kinda plausible. Especially on twitter, where people automatically support whatever political position they have. That's the point.”

Payback will be a “Bitch”!

The professor LIED, claiming Trump said something he did NOT.

This should not be acceptable. And it could be dangerous not to just Trump, but the whole US. When the president says something publicly, that has serious implications.

At the very least he should be fired immediately and no other place should hire him.

“Ask not who the self-adulating assholes are,
you’ll only get your feelings hurt.”

That qualifies as truth to a marxist. It is like Rather when he and others justified the smearing of Bush 2, simply because it was the “seriousness of the charge” that really mattered. Marxists are anti- a lot of things, but their biggest enemy, and most consistent victim, is the truth.

Shows you what most “political scientists” actually do, pontificate on their version of Socialism/Communism hoping to be a part of the “more equal than you” Class after the “revolution... In reality, he is just a stupid schmuck.

Subpoena the CEO’s of the worst offenders of lying to the people to appear on the hill and ask them flat out why they are lying to the American people. Ask them if lying is considered free speech.

He “seized” on it, rather than “pounced” on it I guess.

Couldn’t be that he just pointed it out, or mentioned it.

I have made a hobby out of dissecting the evil way the media manipulates headline language with the hope that causal readers of news, who just skim the headlines, can also be manipulated.

I wish the Trump administration Communication Department would counter this more effectively.

This makes me wonder

What if Nixon had the Internet/Twitter etc back in the day?

YES. I have been advocating something along these lines for years. “Freedom of the press” does NOT include license to lie about people. I hope Trump and the Repubs take this football and run with it as far as they can.

Some caution needs to be in order. The left constantly confuses and abuses language, so that, for example they will call satire “lies” and “hate speech.”

While I agree that the professor lied by attributing the statement to Trump, the content of the statement, comparing Biden to Kim was about right.

As of December 2014, he is foreign affairs columnist and editor-at-large at Time.[2]
https://en.wikipedia.org/wiki/Ian_Bremmer

Yesterday, he was a TIME reporter.
Did they fire him already?

Who was the fake news hack who said even if his book’s lies about Trump were acceptable because it “rings true”?

The serious strategists of capital often arrive at the same conclusions as the Marxists, although naturally from their own class standpoint. The rosy picture painted by Mr. Trump is not shared by any serious bourgeois analyst – quite the contrary, in fact.
[Bremer’s] The Eurasia Group, a respected consultancy that advises the capitalists on possible risks on a world scale, in its recently published annual assessment of top geopolitical risks, warns that the world is moving toward crisis and a state of “geopolitical depression” and that the presidency of Donald Trump is itself contributing to instability: accelerating divisions nationally and internationally, and unravelling the global order that has been painfully constructed over a period of decades.
[Bremmer’s]Eurasia Group expresses the fear that that liberal (i.e. bourgeois) democracies are suffering from a “deficit of legitimacy not seen since World War II”, that the leaders are out of touch with reality and that this political breakdown creates conditions where any major event could have a devastating effect on the global economy and market.

I think you are onto something.

Bremmer should lose his Ph.D. for that.