"I deleted this b/c Dan Crenshaw supported the Fund in May after being a holdout. Apologies to him for the tweet. I have no problem admitting it & correcting the record with facts. For those trying to "own" me, especially as you still promote "alternative facts," enjoy Tuesday." 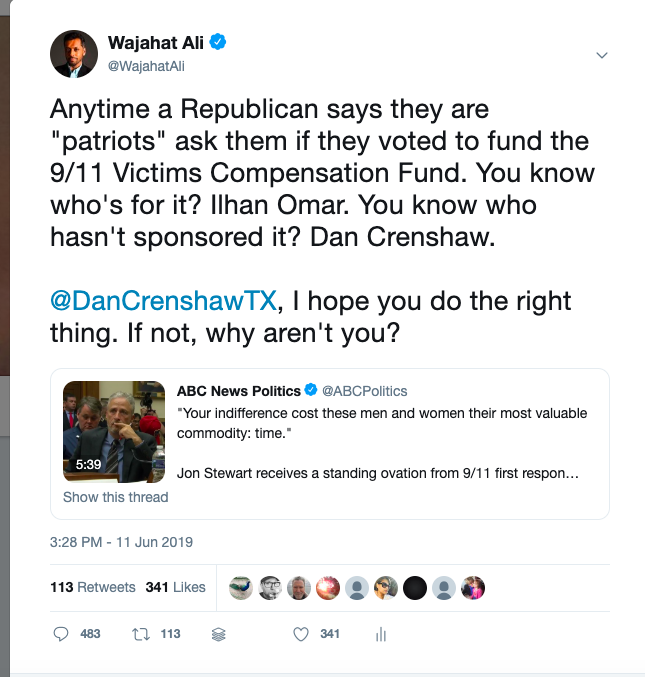 Wajahat Ali is one of the sensational TV journalist working for Al Jazeera America. Born in his homeland Pakistan, he is one of example to crave enormous path in other countries. Making his presence in the industry for a long time, he is one of the active Muslim Americans trying to play an important role in the journalism field and contribution towards another country.

Besides his background, he is the best reckon for his great endeavors as co-host of Al Jazeera America’s The Stream. Additionally, he is an active author followed by TV host and independent consultant for U.S. State Department by profession.

Born and raised some part of his life in Pakistan, Wajahat Ali entire family moved to the United States when he was just a toddler.

Covering much breaking news in his life, Wajahat Ali has been awarded Shorty Award for the best use of social media for providing accurate news in the year 2014. The award-winning journalist is having a fantastic time in Al Jazeera network.

Remaining loyal and faithful to the network from a very long time, he might have high salary per annum. While Wajahat Ali net worth might be in millions, however, these facts are also well hidden. Besides, he is a well-known author. His book named "Domestic Crusaders," which was released in 2001 gained huge success with critically praised.

Currently, Ali workes as a Creative Director in Affinis Labs, which he joined in January 2016. He also serves The Huffington Post as its host/contributor. He function as an Opinion Writer for Guardian News & Media; New York Times; Washington Post.

In 2012, Wajahat Ali was honored as one of three Generation Change Leaders by Sec. of State Clinton for designing, strategizing, and implementing the “Generation Change” leadership training program in over 8 countries to empower young global change agents and social entrepreneurs.

He is the CableFax's Best Show or Series – Public Affairs for “The Stream: Ferguson” (2015); Shorty Industry Awards' Best Use of Social Media for News – The Stream 2014); NABJ's Salute to Excellence Award Finalist (2014)

Coming to his personal life section and body facts, Wajahat Ali has marvelous height while he has been gifted with amazing body structures. Winning the heart of million people with his intellectual skills and cheerful smile, girls are simply crazy about his smile and talking style.

Being followed in his social accounts in a huge manner, many wish to see him in shirtless pictures. Wajahat Ali height and weight are unknown, however, we can guess his height by his appearances. He might have the height of around 6 feet and 2 inches followed by the weight of around 65 kg. Looking best in suit and tie, his extraordinary charm and personality can be taken as an influential factor for many newcomers who want to do something in the similar field.

Covering Wajahat Ali marriage relationship and a list of girlfriends, it’s pretty sad to state that the handsome man has been happily taken. Though he might have several relationships in the past during his college days, but these things has been kept quite in his bio. The source states that he was in serious relationship with his wife from his college days. Maintaining the healthy relationship, the couple tied their wedding knot, long time ago. Avoiding several unwanted relationships, currently, the couple has been blessed with a baby child. However, whether the baby is son or daughter and the name has not been revealed yet.

I’d be damned before I’d take a scolding from some friggin muzzie...

I always respect a person that admits they were wrong. More people should act accordingly.

At least he admitted his error.

6 posted on 06/12/2019 2:45:21 PM PDT by Lurkinanloomin (Natural Born Citizen Means Born Here Of Citizen Parents_Know Islam, No Peace-No Islam, Know Peace)
[ Post Reply | Private Reply | To 3 | View Replies]
To: yesthatjallen
So he promotes fake facts, deletes them only when caught, and brags about how honest he is. Isn't that typical of the "mainstream" media?

Basically, he's a LIAR. But then, he works for the New York Times, where that's company policy.

8 posted on 06/12/2019 2:48:37 PM PDT by TBP (Progressives lack compassion and tolerance. Their self-aggrandizement is all that matters.)
[ Post Reply | Private Reply | To 1 | View Replies]
Thanks so much for your support to this point... I personally apprecaite it...
FReepers, it's far beyond time to wrap up this FReep-a-thon.  Lets do it today.  Please chip in.

FReepers, 96.826% of the Second Quarter FReep-a-thon goal has been met.  Click above and pencil in your donation now.  Please folks, lets end this FReepathon.  Thank you!
...this is a general all-purpose message, and should not be seen as targeting any individual I am responding to...

I have no respect for foreigners who come here, even as toddlers, and tell me America is a horrible country and needs to be deconstructed and rebuilt in their image.

Wajahat Ali: "In order to fight hate, let’s build a multicultural coalition of the willing"

I would too in this case, but can’t, the “apology” takes a swipe at Crenshaw.

12 posted on 06/12/2019 2:54:10 PM PDT by Hulka
[ Post Reply | Private Reply | To 5 | View Replies]
To: yesthatjallen
I have no respect for foreigners who come here, even as toddlers, and tell me America is a horrible country and needs to be deconstructed and rebuilt in their image.

check this out...WHO WRITES THIS CRAP and I am VERY SORRY I stayed with this article down to this line near the bottom

Wajahat Ali has marvelous height while he has been gifted with amazing body structures.

This whole “9/11 Victims Fund” is a fraud of the first degree. First of all, firemen and police officers had a pretty damned good pension which includes heath insurance.

Unless NYC is the exception, of course.

Second, this fund includes people who just happens to be in the area code, if they come down with any number of illnesses associated with First Responders, they get money from the fund.

Yet all, including the Number 1 Asshat Jon Stewart whines that First Responders are being forgotten.

If anyone has responsibility for “heroes”(the area code “survivors”, not the brave who risked their lives saving others) it is the city and state of New York

If they have so much money to give illegal aliens welfare and health coverage the average American is hard pressed to afford, then why should I have my tax money cover NYC liberal’s responsibility?

Flame away, if you wish but you’re being played for saps.

"Thanks for letting me know. I'm glad you did and I have no problem correcting and updating the record with facts. Now try it with your comments about Ilhan Omar. You'll feel better. Sincerely, a fellow patriot."

This foreigner believes in jihad correct? (Muslims do)

Why is he (they) in the United States ?

Dear ASSHAT ALI....it was YOUR people, MUSLIMS that created the problem....so I assume you MUST BE PAYING these people!!

“I love apologies that turn into condescending lectures.”