On Monday's Morning Joe, Joe Scarborough repeatedly referred to Congressman John Ratcliffe as a "clown." But that wasn't contemptuous enough for Joe. And so Scarborough also suggested that President Trump's nominee as Director of National Intelligence be called a "fascist," and proceeded to do so time and again.

Scarborough justified his slur by claiming that during the Mueller hearings last week, Ratcliffe called "every Democrat a socialist." Turnabout being fair play, suggested Scarborough, it was fitting to refer to Ratcliffe as a "fascist."

Get the rest of the story and view the video here. 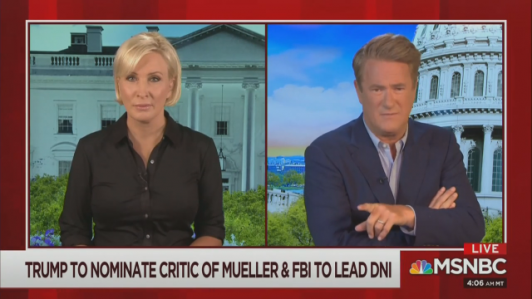 “Fascist” is the new “racist.”

Moaning Joke needs to see a shrink. He appears to have some “issues”. LOL.

Only MSNBC and CNN give a rats a$$ what he thinks.

If Trump nominate Joe’s mother, she would also be called a fascist.

Which is worse in lib speak - a fascist, nazi or racist?

The Dems/Left/Deep State are scared to death of Ratcliffe & this is why [excerpt from link]:

Representative John Ratcliffe is a member of the House Judiciary Committee and House Intelligence Committee. Ratcliffe is one of only a few people who has seen all of the unredacted DOJ and FBI evidence within the documents congress has previously asked the President to declassify.

Ratcliffe’s nomination, and confirmation should be unremarkable.

However, due to the information that Ratcliffe already holds about the overall intelligence community operation in 2015 through 2019, we can expect the deepest part of the Deep State to immediately begin a process to impede any confirmation effort. Ratcliffe is a risk, and he will likely be controversialized in a political effort to block his nomination.

Also, the ODI change is absolutely necessary - here is the process for declassifying docs & why ODNI can block [excerpt from link]:

Normally any officer who refuses the request for declassification must justify to the intelligence hub; the Office of the Director of National Intelligence (ODNI, Dan Coats).

Normally the compartmented executive branch intelligence official tells the ODNI (Dan Coats) why they, their unique interests, cannot approve of the declassification request.

The ODNI then informs POTUS why the document is not cleared for declassification.

If he disagrees with the decision of the intelligence official, POTUS then would have to fire, replace and hope the next person in the chain-of-command would sign-off. In essence, President Trump would have to fire people, and keep firing people, until he gets to a person, inside that specific agency, who will comply.

However, President Trump granted AG Bill Barr with decision-making authority that would override any cabinet officer who might block Barr’s request.

Subsequently, with Bill Barr holding the executive power to declassify information, why would replacing ODNI Dan Coats be necessary?

So he thinks “socialist” has the same implications as “fascist.” If so, he is ignorant.

Who watches these mental midgets?

Not me or anyone I know. ANYONE.

It’s remarkable how President Trump has drawn vermin like Joe to reveal who they really are. There was a time that the Morning Joe program seemed to be serious, and sober, even if it was left wing. Now, the program appears to be a collection of leftist loons, ranting and raving at the bad orange man.

It’s both disturbing and delightful.

Btw, I give no attention, nor credibility to this iteration of Morning Joe. Early on after President Trump was elected, they stated that they were against all things Trump. Therefore, there is no need for people like me to tune in.

Baby killing Communist. He’s PW and she must do phenomenal sex (in the dark).

The crazy rants come from two sources, IMHO. The new "faces" are dumber than their predecessors. Walter Cronkite was a commie, but he was smart. Dan Rather was less intelligent, and the people following are undisciplined and dumb.

Second, the crimes are bubbling to the surface, and they're scared. Joe (with the dead intern) and other media sources, because they're compromised and because they knowingly ran with false stories, DO NOT want the truth to come out. You might not believe it, but they WILL get crazier.

Scarborough’s every word seems to get posted to FR. Why? He is not an elected official. He is not the owner of the network. Posting his nonsense day after day just generates a lot of useless venting.

The man gets a TV show and paid for name calling. That’s all he does and is a sign of blatant impotency and being a colossal dumb ass. His hair is probably smarted than he is. Let’s face it, people really want to interview his hair...