The Manhattan U.S. Attorney has released the following statement about the suspicious custodial death of Jeffrey Epstein:

Manhattan U.S. Attorney Geoffrey S. Berman said: “Earlier this morning, the Manhattan Correctional Center confirmed that Jeffrey Epstein, who faced charges brought by this Office of engaging in the sex trafficking of minors, had been found unresponsive in his cell and was pronounced dead shortly thereafter of an apparent suicide.

Today’s events are disturbing, and we are deeply aware of their potential to present yet another hurdle to giving Epstein’s many victims their day in Court. To those brave young women who have already come forward and to the many others who have yet to do so, let me reiterate that we remain committed to standing for you, and our investigation of the conduct charged in the Indictment – which included a conspiracy count – remains ongoing. We continue to urge anyone who feels they may be a victim or have information related to the conduct in this case to please contact 1-800- CALL FBI.” (link)

Apparently the death of Jeffrey Epstein, a pedophile and sex trafficker directly connected to the Clinton cabal, has triggered the maximum alert warning for “Avi” and the Shareblue community, as they dispatch urgent talking points for their social media army:

HA! Bunch of pikers. The Fake News Media has already sent out the talking points. It’s all conspiracy theory talk.

Just like when the Clintons conspired with the Russians to stop Trump, and then turned it on its head to make it look like Trump conspired, they’re going to try to manufacture Trump as Epstein’s friend, not Bill, nor Richardson, Mitchell, and all the other democrats...

Do NOT take this lightly, they’re very good at this.

2 years after the Vegas Massacre:

If the victims were ordinary joes and we got ZIP, how will we get ANYTHING now that the stakes for Emperors and Uber SturmField Marshals are SKY HIGH..?

This will be the new hammer that the left will use to try to beat up on Trump. The racist arguments will take a backseat for awhile.

The commie left was preparing for this day, when the Clintons would off Epstein, so they came up with these talking points in case the Clintons did what they do best

Bring it on. That’s why God gave us a voice to speak with and fingers to type with. 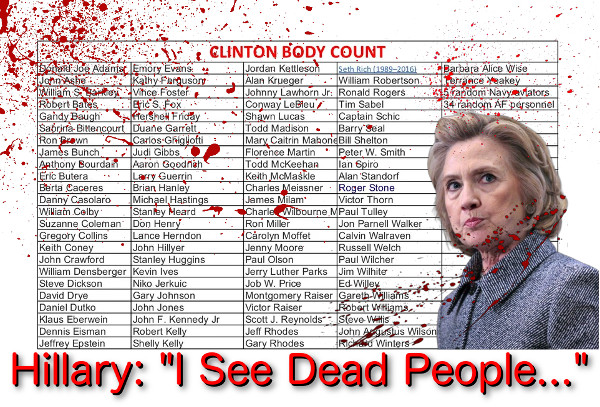 If there is anyone responsible for doing everything in his power to keep Epstein alive as a federal witness, it is this guy. Why isn't he on the curb with a box with his personal effects and a note saying that he should get counsel because he is going to need it.

Two guards at the MCC who normally have overnight shift that watches over suicide risk inmates, were both told to leave area 3 hours earlier for scheduled “Maintenance” to jail cells and hallways. This morning Epstein was found dead

And they expect us to get bent over a few Russian ads that supposedly helped Trump? The left are such wacko hypocrites.

Interesting that they’ve got a term for role playing as a conservative on social media: ROLCON.

These lefties are sneaky.

Epstein found dead in his cell of stab and gun wounds. Warden says it’s the worst case of suicide he’s ever seen. /s

ROLCON = roleplay as a conservative

AKA systematic deliberate fraud and misrepresentation

Shareblue is a criminal organization and that document proves it.

16 posted on 08/10/2019 7:33:34 PM PDT by thoughtomator (... this has made a lot of people very angry and been widely regarded as a bad move.)
[ Post Reply | Private Reply | To 1 | View Replies]
To: Yardstick
"Interesting that they’ve got a term for role playing as a conservative on social media: ROLCON. These lefties are sneaky."

Uh, just how do we know that your post is not part of ROLCON? Just sayin' and askin', uh, for a FRiend...

The Investigation Is Underway(The United Spot only 30 seconds)