In the aftermath of the news that liberal Supreme Court Justice Ruth Bader Ginsburg has once again been treated for pancreatic cancer, talk of a potential vacancy on the court has once again heated up. While there will be disagreement over how to handle such a vacancy, it's clear that everyone knows a Supreme Court battle in 2020 will be brutal and contentious.

Chris Wallace, the host of Fox News Sunday, weighed in on Friday, "We all wish her a long, happy, healthy life. I will say this though, and again, there’s no reason not to think that she won’t be on the court the first Monday in October, but if she were forced to step down, this would make the Kavanaugh hearing, the Gorsuch hearing, Clarence Thomas, it would make it look like a tea party.”

Former Obama adviser David Axelrod warned Senate Majority Leader Mitch McConnell not to go through with filling a vacancy, should one occur:


If there is a SCOTUS vacancy next year and @senatemajldr carries through on his extraordinary promise to fill it-despite his own previous precedent in blocking Garland-it will tear this country apart.

If Ruth Bader Ginsburg were to retire, you can expect to be regularly reminded of Merrick Garland, Barack Obama's nominee to the Supreme Court following the death of Antonin Scalia. Garland was never given a hearing because Mitch McConnell was following The Biden Rule. In June of 1992, then-Senator Joe Biden, who was chairman of the Senate Judiciary Committee at the time, gave a speech on the Senate floor arguing that then-president George H.W. Bush shouldn't attempt to fill a vacancy to the Supreme Court in the middle of an election year.

An interesting thing about these so-called rules is that they are made by Democrats to hamstring Republicans. It's good that McConnell turned it back on Democrats.

An adept Republican (if there is such a thing) can play the hypocrisy both ways: 1) the Biden way was to declare that the people should decide the next SCOTUS nominee through the ballot box, and 2) the hypocritical spin would be to say that the President doesn't give up his Constitutional powers in an election year, and if the voters don't like his choice they can vote him and his party out of office afterwards.

The Democrats have been masters at after-the-fact apologies, such as giving back tainted campaign donations after the money was used to win the race. It's time for Republicans to show the same hubris by discarding Democrat so-called rules, get their justice appointed, and then tell the voters to approve or disapprove once it can't be undone.

4 posted on 08/24/2019 11:33:47 AM PDT by Political Junkie Too (The 1st Amendment gives the People the right to a free press, not CNN the right to the 1st question.)
[ Post Reply | Private Reply | To 1 | View Replies]
To: jazusamo
"The subject of Abraham Lincoln's "Lyceum" speech was citizenship in a democratic republic and threats to American institutions. In the speech, Lincoln discussed in glowing terms the political system established by the founding fathers, but warned of a potential destructive force from within. He asked his listeners:

'Shall we expect some transatlantic military giant to step the ocean and crush us at a blow? Never! All the armies of Europe, Asia, and Africa combined, with all the treasure of the earth (our own excepted) in their military chest, with a Bonaparte for a commander, could not by force take a drink from the Ohio or make a track on the Blue Ridge in a trial of a thousand years. At what point then is the approach of danger to be expected? I answer. If it ever reach us it must spring up amongst us; it cannot come from abroad. If destruction be our lot we must ourselves be its author and finisher. As a nation of freemen we must live through all time or die by suicide.'- Abraham Lincoln, "Lyceum" Speech

Lincoln then warned of a destructive force from within which could overtake the American political system. He said:

'It is to deny what the history of the world tells us is true, to suppose that men of ambition and talents will not continue to spring up amongst us. And when they do, they will as naturally seek the gratification of their ruling passion as others have done before them. The question then is, Can that gratification be found in supporting and maintaining an edifice that has been erected by others? Most certainly it cannot. Many great and good men, sufficiently qualified for any task they should undertake, may ever be found whose ambition would aspire to nothing beyond a seat in Congress, a gubernatorial or a presidential chair; but such belong not to the family of the lion or the tribe of the eagle. What! think you these places would satisfy an Alexander, a Caesar, or a Napoleon? Never! Towering genius disdains a beaten path. It seeks regions hitherto unexplored. It sees no distinction in adding story to story upon the monuments of fame erected to the memory of others. It denies that it is glory enough to serve under any chief. It scorns to tread in the footsteps of any predecessor, however illustrious. It thirsts and burns for distinction; and if possible, it will have it, whether at the expense of emancipating slaves or enslaving freemen. Is it unreasonable, then, to expect that some man possessed of the loftiest genius, coupled with ambition sufficient to push it to its utmost stretch, will at some time spring up among us? And when such an one does, it will require the people to be united with each other, attached to the government and laws, and generally intelligent, to successfully frustrate his designs. Distinction will be his paramount object, and although he would as willingly, perhaps more so, acquire it by doing good as harm, yet, that opportunity being past, and nothing left to be done in the way of building up, he would set boldly to the task of pulling down.'- Abraham Lincoln, "Lyceum" Speech

“it would make it look like a tea party”

Doesn’t he recall which side came out on top?

I actually think he’s right about the absolute despicable behavior the liberals will show if this were to happen. I think they would destroy multiple cities.

Sorry, dems, President Trump is not going to kowtow to your wishes....

and you fools damn well know it.

Bah, next the Democrats will say that Trump can’t replace RBG now, because two dozen+ candidates are campaigning already.

If an opening on the court occurs, McConnell should come out and say he was wrong to follow the Biden rule. Democrats were right....and then vote on Trump’s nominee.

It thirsts and burns for distinction; and if possible, it will have it, whether at the expense of emancipating slaves or enslaving freemen...

Hypocrisy, thy name is Lincoln.

Holier than though, hypocrite ####.

Yep, in fact he’s already said if a vacancy comes he’ll fill it.

14 posted on 08/24/2019 11:51:48 AM PDT by jazusamo (Have You Donated to Keep Free Republic Up and Running?)
[ Post Reply | Private Reply | To 12 | View Replies]
To: Erik Latranyi
If an opening on the court occurs, McConnell should come out and say he was wrong to follow the Biden rule. Democrats were right....and then vote on Trump’s nominee.

"In the spirit of our esteemed colleague John Kerry, 'I changed my mind.'" 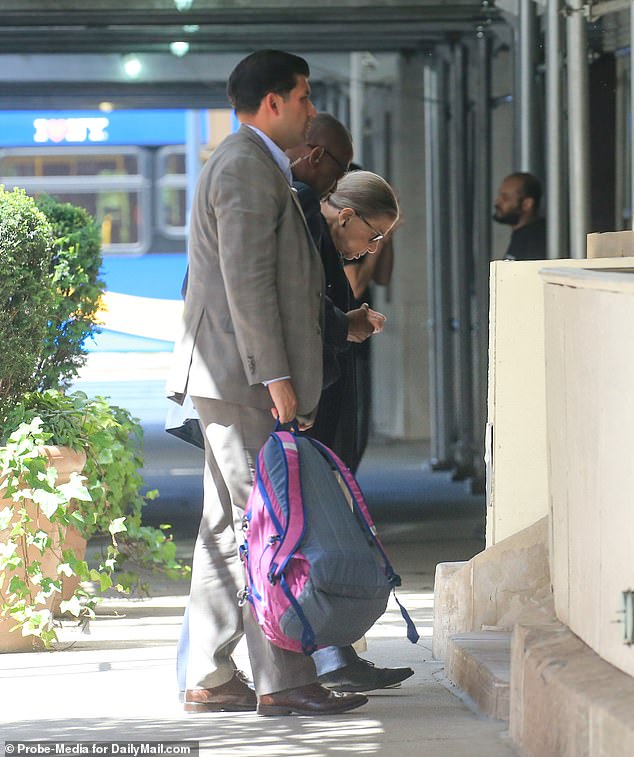 The poor thing is a death's door and has to act like a working USSC justice.

The times she could have quit through her previous three cancers but was told to hang in there b/c Hillary would be naming her successor.

They'll do that either way. We might as well watch them burn their own homes with a real American in the White House and a Supreme Court that supports the rule of law.

The democrats said the rule was a bunch of chit when 0 nominated Garland. Now they act like it's as established as Judicial Review.

Trump needs to get in gear and have his nominee ready to go when the organ music starts playing on CNN.

The dems would play it that way. The Republicans should have the nominee on deck and confirmed in a week.

And now she has to hang in there because Trump is to lose 2020.