NAGOYA, Japan — Former House Speaker Newt Gingrich, who led the last impeachment of a president, said President Trump can help himself by taming his frustration over the Democrats’ partisan inquiry and staying focused on highlighting his economic achievements for middle-class voters.

Mr. Gingrich points to the example of former President Bill Clinton, the man he helped impeach in 1998, as someone who successfully navigated that difficult path.

“Go back and look at Clinton — he compartmentalized,” Mr. Gingrich said in an exclusive interview. “Clinton was very disciplined about saying, ‘I’m working on the American people’s problems, and I’m not going to talk about that [impeachment].’”

Mr. Gingrich, who has offered advice to Mr. Trump since House Democrats announced the formal impeachment inquiry, said the president “just needs to realize he doesn’t necessarily help his case when he stays on this topic.”

“My advice would be to relax — understand, you’re going to lose [in the House],” Mr. Gingrich said. “I don’t worry at all about Trump getting convicted [in the Republican-majority Senate].”

Mr. Trump spent much of the weekend tweeting his criticism of what he calls the latest Democratic “witch hunt” — the impeachment inquiry focusing on his efforts to persuade Ukraine’s president to investigate Democratic presidential front-runner Joseph R. Biden. He also engaged in a feud with Sen. Mitt Romney, Utah Republican, who has criticized the president’s actions.

“Not only are the Do Nothing Democrats interfering in the 2020 Election, but they are continuing to interfere in the 2016 Election. They must be stopped!” the president tweeted.

The former speaker sat down with The Washington Times to discuss impeachment during a leadership summit in Japan sponsored by the Universal Peace Federation, at which he delivered a keynote address. Mr. Gingrich said the president is understandably resentful...

Great advice, Newt. Say, maybe President Trump ought to take another page out of Bubba’s playbook and go out and start wars all around the world as a distraction.

Does anyone wonder why Newt is not in this administration? He’d push have Trump sitting on the sofa with Nancy

Heck, Newt is reason number 142 why Trump is president

2. Newt still pretending this is politics as usual. 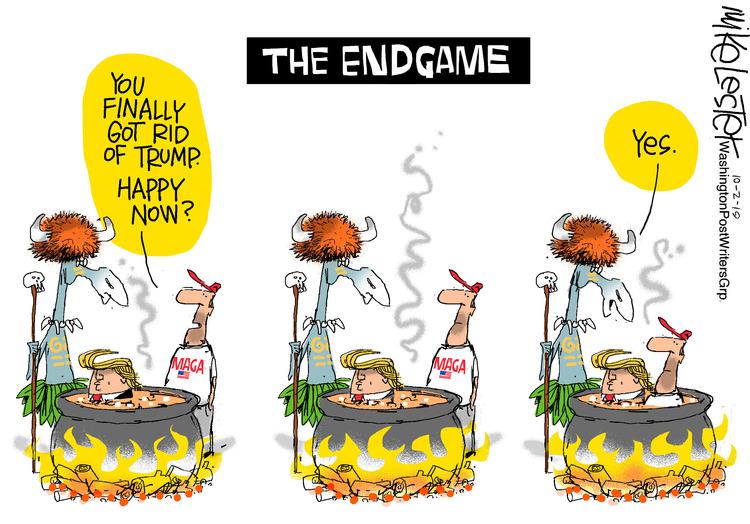 26 posted on 10/06/2019 4:24:38 PM PDT by DoodleDawg
[ Post Reply | Private Reply | To 19 | View Replies]
To: jazusamo
Newt was one of the most valuable advisors Trump had in 2016. Trump’s campaign was seriously off the rails — and Trump himself was a horribly undisciplined candidate — until he took Newt’s advice and began to focus on the key messages that would help him win.

What Newt is saying here is that playing to his base is only going to get Trump so far. His re-election hinges on broadening his appeal to include moderate suburban voters who may not buy into his theatrics.

God must have loved the quisling, cowardly RINOs cause he made so many of 'em.

Trump can best fight impeachment by not letting it consume him emotionally. By continuing to get the facts out. By tweeting the issues. By going to bat for conservatives who have been fired for their beliefs or had their kids stolen from them. By letting the voters know how he can, with their help, make America great again.

How dare Gingrich make this comparison. Clinton was guilty. He lied under oath, which is why he was impeached. Trump is not. There is NO parallel.

Anyone that compares Trump to Clinton is a complete and clueless ass.

Newt is speaking from his “safe space”.

This is _our_ fight—time for Newt to pick sides.

Trump needs to pack an Uzi

Clintbilly was also GUILTY, unlike Trump.

Newt’s greatest fan is Newt. He fails to realize that what happened while he was king or rather speaker is not relevant to today. We have animosity at a level never seen before in this nation. The immigration challenges did not have an Islamic component. We did not have states and cities seceding from the rule of law while they continue to suckle at the teats of the federal government.
Newt, enjoy your retirement and stop embarrassing yourself.

All I think Newt is doing is putting more bait in the Rat trap.!

Yeah tell them its upsetting Trump, sleepless nights, maybe even walking around talking to presidential portraits !

Again there’s no official impeachment inquiry !
If there was GOP members could call witnesses & cross-examine. The Rats don’t want that. The don’t want it to come to a vote. They just want to do this kabuki because its all one-sided and it keep the nut-house part of their base energized.

I am sure Trump is all fine with ti!