On the evening of 18 September 2018, Anthony Reyna was happy and excited. He and his friend, Gary, were hunting moose on Joint Base Elmendorf-Richardson north of and sharing a boundary with Anchorage, Alaska. Tony had drawn a moose tag for a bow hunt. He was using a 60 lb PSE ThunderBolt compound bow. He has owned the bow since he was a teenager. Tony and Gary set up and started moose calling about 6 p.m. After 40 minutes, they heard a bull moving in. They saw his antlers at 30 yards. Suddenly, a second bull appeared at 15 yards! It was not as big, but Tony was hunting for meat.

Jimmy is in the lead, about five feet ahead of Tony. He has time for a startled “F*ck Bear!” as he draws the Glock from the Serpa. He has trained and practiced. The draw is smooth and fast from a retention holster. As the bear bounds over the downed spruce, Jimmy double taps, two shots, one to the chest, one to the head. The bear crashes down, 10 feet from Jimmy, dead right there (DRT). It is over in a couple of seconds.

Meese: “Woah! Hey! We just wanted to let you know that you’re calling a BEAR—and it’ll be here any minute!”

No mention of taking the bear meat?

They didn’t want to take the chance with trichinosis?

I’d be worrying about prion disease, myself, with the moose.

Yeah, I’m not big on wild game just from the taste, let alone all the diseases and parasites.

Heck, I don’t really like lamb without it being saturated in mint condiments.

In any case, that means more for the rest of you...

Big boars are not that great, I am told.

Besides, I think they are prohibited from taking the meat on a defense of life and property kill. 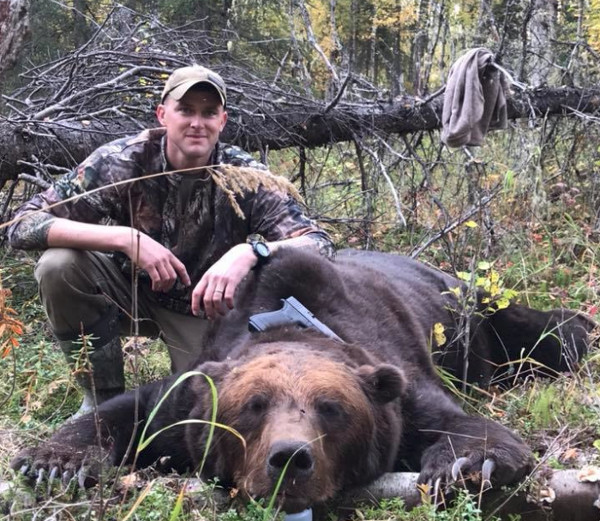 The only good bear is a dead bear. Same as a commie.

Terminal ballistics is also very important when dealing with an animal of this size. He had a special 10-mm 200 grain bear slug which was the difference maker.

My son killed a bear and it had a tag warning not to eat the meat . He was a problem bear and had been tranquilized several times????

I ate bear heart once and it was very sweet.

Maybe with all the hangups on meat you should consider becoming a vegan. IMHO

No, I just am happier with farmed meat, save for the lamb. And venison.

I’ve shot a lot of handguns but never have shot a Glock.

Gonna have to try one sometime.