His campaign sent a statement Wednesday afternoon saying it is doing so due to the close nature of the gubernatorial race and multiple reports of voting irregularities. “The people of Kentucky deserve a fair and honest election. With reports of irregularities, we are exercising the right to ensure that every lawful vote was counted," Bevin said in a news release.

In a 5 p.m. news conference on Wednesday, Bevin expanded on the irregularities. 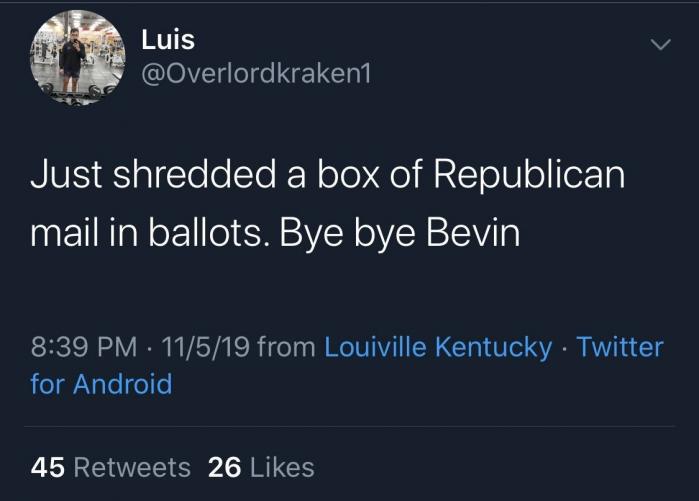 Overlordkraken1’s twitter account has been suspended. As just a wild guess, I think Bevin’s people already know about it.

I’m convinced that a lot of liberal hacks that can’t climb the D-Team ladder join the R-Team simply to try to climb theirs.

Crazy man. As bad as Obama was, we never would have tried to physically get rid of him. We never even pushed for impeachment.

Isn’t it strange that there are always widespread “irregularities” whenever a democrat wins in a strong republican area by a small margin?

2019 and we can’t have a tech savvy voting system that protects against fraud?

I dont understand. Well yeah I do.

No one wants a cheat proof system.

It’s like Tammany Hall all over again. And we make FUN of those times as if they don’t happen now

I only hope and pray that Republican, Matt Bevin digs in deep to uncover the massive voter fraud that took place in the state of Kentucky Governor election.

I tracked this voting the entire evening on “Politico” and Bevin led from the first reporting of voting. His leads at times were 20,000, 30,000 & even 50,000 votes. Then at the last minutes or so..with about 90% of the votes counted...the crooked voter fraud county, “Jefferson County” reported a massive amount of votes for the Democrat, Beshear. And...it was only Bevin that was impacted. The entire rest of GOP Candidates continued on to mass victories up and down the ballot.

POTUS, Trump, The RNC, Ronna McDaniel, The GOP in Kentucky & nationwide, Matt Bevin must go through a recount and must have the best GOP poll watchers and lawyers present at all times during the recount. The Democrat rat/rodent, scum & vermin rigged this election at the last minute and, they must not be allowed to get away with it, GOP, etc. Regardless of the cost,...you all must keep on digging, forcing the Democrats to spend and spend cash to protect their voting fraud crimes. Anyone with half a functioning brain can see exactly what happened...Jefferson county reported very few votes through the whole election count...just waiting to see what fraud would needed to bring Bevin down and when they had that info...they reported the number fraud votes to do just that!!! Matt Bevin, GOP...do not give in, do not give up. Fight this fraud now, even if you have to go all the to Supreme Court!!!

Obama was shielded with the almighty cloak of racial victimization. Anyone dare mess with that and they immediately become a klansman.

Nope not making sense just like in my state where it went republican for all seats, but the Agriculture seat went Dem which happens to issue concealed carry permits out
****************
This instance, along with many others, may be the evidence being gathered for a push for federal reform of election laws.

With early voting being practiced nationwide, there is no need for absentee ballots, except for those who can document they are out of country, or physically unable to cast their ballots in person.

Absentee ballots fraud and vote harvesting has become a criminal enterprise, spearheaded by the DNC and their agents.

Voter registration rolls need to be wiped clean periodically, and everyone required to re-register in person with a government issued ID.

A clever person, familiar with his neighborhood, can now with 90% certainty who individuals are voting for.....
........and take appropriate steps to destroy the ones he wants.

And “voting parties” should be criminalized.

52 posted on 11/07/2019 4:44:25 PM PST by manc ( If they want so called marriage equality then they should support polygamy too.)
[ Post Reply | Private Reply | To 50 | View Replies]
To: flamberge
Absolutely. Declare undervotes in the tens of thousands, and demand that optical ballots be recounted by hand.

You get into coal country with Donkeys still running voter reg and elections at the county level, handing out pencils instead of pens knowing optically they won't register -- you're talking about once you find 50 ballots that didn't register Bevin, you are off and running. The optix of some poor Appalachia-faced woman crying that 'my vote for Bevin wasn't counted, it was ruin't', and it's on like Donkey Kong.

I'm telling you all right now, if Bevin can find one single hillbilly precinct where voters were given pencils instead of pens, those optic ballots weren't recorded; and then the hysteria will spread state-wide like wildfire.

Even Democrats will complain their votes for Beshear weren't counted and will demand a ballot-by-hand recount.

“clicked on wrong tab, no reading glasses, the dog was barking, Dobby appeared and scared me, Amber alert went off on the phone, I was not logged in...”

You forgot to add...

“I ran outta gas. I had a flat tire. I didn’t have enough money for cab fare. My tux didn’t come back from the cleaners. An old friend came in from outta town. Someone stole my car. There was an earthquake, a terrible flood, locusts. It wasn’t my fault!! I swear to God!!”

After all, wouldn't this popping out of thin air interrupt your OODA loop?

It sure would give me spelling errors...

The Dims used to pull that crap in Louisiana every election. Baton Rouge, and New Orleans used to keep the polls open due to “heavy turn out” until they won. That’s why no one dared to use the school/voter buses during Katrina. The party bosses hadn’t issued the order to make them run.

Bevin sounds like my kind of guy. The KY GOP sounds like the usual squishes. Do people in Kentucky really love the educrats and votebuyer handouts that much?

More than anything else, Matt Bevin’s loss was about Matt Bevin. For four years, the New Hampshire–raised millionaire has made enemies across the state of Kentucky. Most notably, he’s repeatedly tangled with educators by threatening their pensions, cutting education funding, and lobbing callous insults about their commitment and priorities. With Bevin in office, educators organized under the banner of Kentucky 120 United, a grassroots advocacy group that called for sick-outs and staged massive protests in Frankfort over the past two years. It seems they lived up to their rally cry: “Remember in November.”

Bevin also had a less vocal but potentially more fatal enemy: the members of his own party who came out against him. He feuded with his lieutenant governor, who was replaced on the ticket this year, and saw several state Republicans endorse Beshear over him.