Two important and interrelated news stories largely passed under the radar Wednesday as the House impeachment hearings continued to dominate the headlines. Both stories concern the deteriorating state of affairs in Mexico and have huge implications for immigration, the southwest border, and U.S. national security. It’s a shame more Americans aren’t paying attention.

The first was a report from BuzzFeed that as of Wednesday the Trump administration began carrying out a controversial plan to deport asylum-seekers from El Salvador and Honduras—not to their home countries, but to Guatemala, which the administration has designated a “safe third country,” meaning that migrants from those countries must first apply for asylum in Guatemala before seeking asylum in the United States.

The move is part of the administration’s broader strategy to reduce the number of Central Americans seeking asylum at the southwest border, which last year saw a dramatic increase in illegal immigration largely driven by families and minors from the so-called Northern Triangle countries of Guatemala, Honduras, and El Salvador.

The second story was a Los Angeles Times dispatch from the Mexican state of Michoacán, where rival cartels are waging war not over drug trafficking routes but over control of the multibillion-dollar avocado industry. More than a dozen criminal groups are fighting over the avocado trade in and around Uruapan, the capitol of Michoacán, “preying on wealthy orchard owners, the laborers who pick the fruit and the drivers who truck it north to the United States,” writes reporter Kate Linthicum. Organized crime in Mexico, she explains, is diversifying—it isn’t just about drugs anymore:

In parts of Guerrero state, cartels control access to gold mines and even the price of goods in supermarkets. In one city, Altamirano, the local Coca-Cola bottler closed its distribution center last year after more than a dozen groups tried to extort money from it. The Pepsi bottler left a few months later.

In Mexico City, bar owners in upscale neighborhoods must pay taxes to a local gang, while on the nation’s highways, cargo robberies have risen more than 75% since 2016.

Compared with drug trafficking, a complex venture that requires managing contacts across the hemisphere, these new criminal enterprises are more like local businesses. The bar to entry is far lower.

The report also notes that homicides are at an all-time high in Mexico, and that cartels have taken control of migrant smuggling in the state of Tamaulipas, which borders the Texas’s Rio Grande Valley, the busiest stretch of the border for illegal immigration.

All this comes on the heels of the massacre of an American family in Mexico, including three women and six children, earlier this month by cartel gunmen, as well as the defeat of a detachment of the Mexican National Guard by cartel forces in the city of Culiacan last month. Mexican President Andres Manuel Lopez Obrador has no strategy to reduce cartel violence and no intention of fighting the cartels.

The Chaos South of Our Border Won’t Stay There

So what do these two news stories from Wednesday have to do with one another, and why would they have major implications for the United States? Simply put, what has happened in Central America is now happening in Mexico. The difference is, when asylum-seekers from Mexico start turning up on our border we won’t be able to deport them to a third country or easily turn them away. If you thought the border crisis was bad last year, wait until hundreds of thousands of families in Michoacán and Tamaulipas decide to flee the cartels and seek asylum in the United States.

To really appreciate the gravity of the situation in Mexico you have to understand some of the dynamics behind the border crisis, which has been driven by Central Americans fleeing societies that are in a state of collapse. Widespread extortion, kidnapping, and violence from gangs throughout the Northern Triangle, combined with grinding poverty and scarce economic opportunities, has prompted hundreds of thousands of Central American families to head north.

One of the reasons this mass exodus turned into a crisis is that unlike earlier waves of illegal immigration, these migrants weren’t single adults from Mexico who could be quickly deported under U.S. law. They were migrant families and minors seeking asylum from noncontiguous countries, which meant they had to go through an entirely different legal process that takes much longer.

The Trump administration, like the Obama administration before it, faced a choice: either release large numbers of people who had crossed the border illegally or detain them in inadequate facilities that were never designed to hold children and families. The administration responded with a host of new policies, some of which have been struck down by the courts, designed to deter Central American asylum-seekers and reduce illegal border-crossings.

Designating Guatemala as a safe third country is one of those policies, despite the reality that Guatemala is by no means a “safe” country (like El Salvador and Honduras, it’s one of the most violent countries in the world). The Migrant Protection Protocols, also known as “remain in Mexico,” is another such policy, which forces asylum-seekers to await the outcome of their case in Mexico, often in dangerous border cities where they are vulnerable to exploitation by cartels and corrupt officials.

The upshot is that as Mexico descends into warlordism marked by widespread criminality and gang warfare, we should expect ordinary Mexicans to respond the way ordinary Central Americans have. Eventually, they’ll leave. Many of them, perhaps hundreds of thousands, will at some point head north and claim asylum. When they do, the border crisis that we’ve been dealing with for the past year will seem insignificant—a prelude to a much larger and intractable crisis, for which there will be no easy fix.

Oh great! I’m headed to Guatemala for a week in January. I was told by a doctor who travels extensively to get out of Guatemala City as soon as my plane lands.

” Many of them, perhaps hundreds of thousands, will at some point head north and claim asylum.”

And they’ll bring their culture and love of Mexico with them.

3 posted on 11/21/2019 8:56:25 AM PST by dljordan
[ Post Reply | Private Reply | To 1 | View Replies]
To: SeekAndFind
The upshot is that as Mexico descends into warlordism marked by widespread criminality and gang warfare, we should expect ordinary Mexicans to respond the way ordinary Central Americans have. Eventually, they’ll leave. Many of them, perhaps hundreds of thousands

And, isn't it more than just hundreds of thousands, thus far?

It sounds like great opportunities for massive drone kills.

6 posted on 11/21/2019 8:57:33 AM PST by ConservativeMind (Trump: Befuddling Democrats, Republicans, and the Media for the benefit of the US and all mankind.)
[ Post Reply | Private Reply | To 1 | View Replies]
To: SeekAndFind
Already playing in a neighborhood near yo: 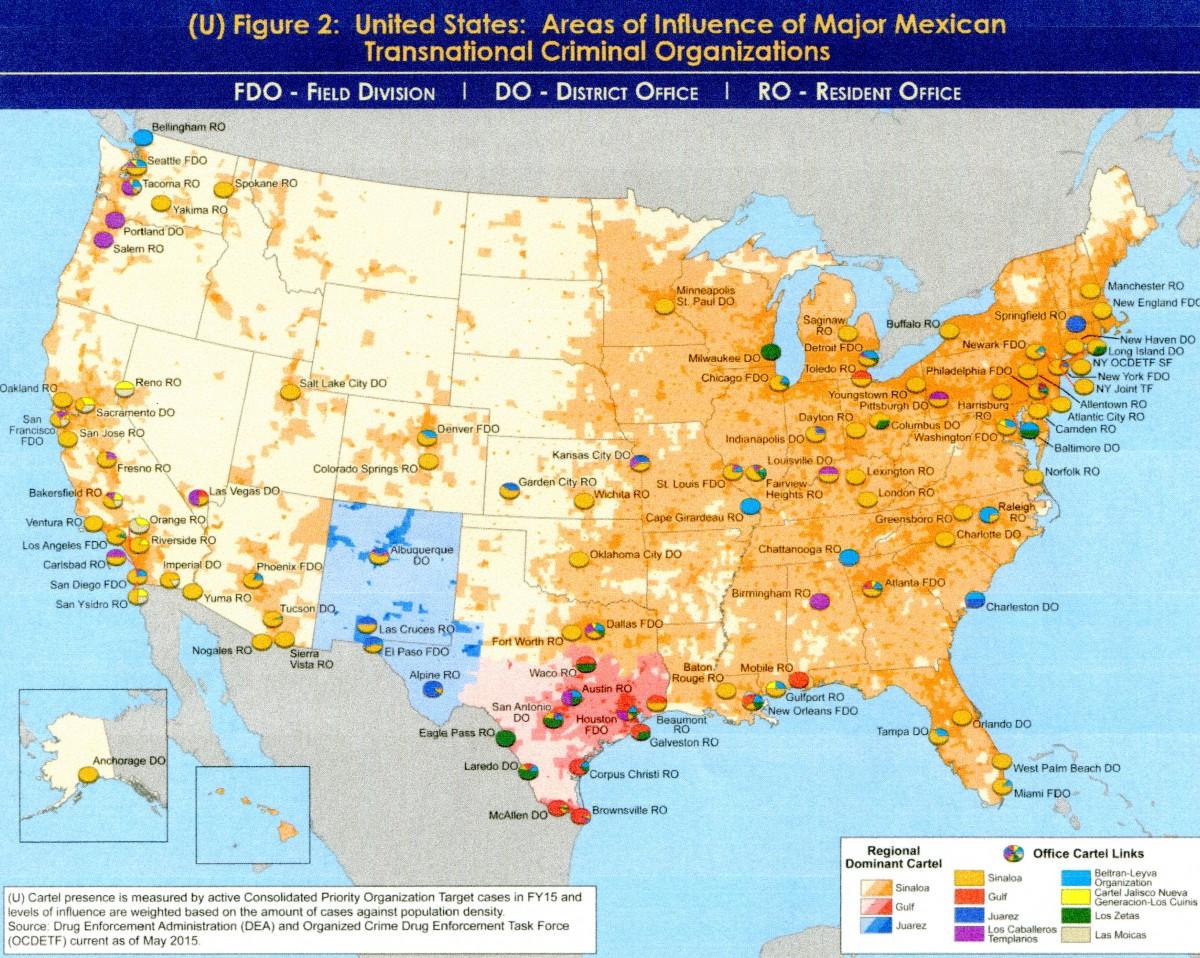 I remember fifty years ago, in the anti-violence hysteria following the murder of Bobby Kennedy, someone reminding the news media that Mexico had more murders with knives than the US had with firearms.

The reply was that it was “because of the MACHO culture in Mexico, something that the US does not have.”

Well, now we do have it and it is even worse in Mexico, coming our way.

Sounds like time for a wider border and no-man’s-land to be established.

Either the cartels are getting more greedy or the drug trade is taking a hit.

The recent story about invaders using cutting tools to break through new wall sections definitely made we think that Predator drones should be deployed to take out such crews.

There is a reason ROME had Legions on the Rhine for centuries. When those legions disappeared, Rome was overrun with Huns, Vandals, Goths, and destroyed.

The chaos won’t stay south of the border.
And that is why we don’t need a Wall.
We need a freakin’ DMZ with minefields, machine gun towers, quick reaction forces, and helicopter gunship patrols.

Looks like the cartels are already here and dug in. The longer we wait to take them out the harder it will be.

War is coming and it doesn’t look like anything we envisioned before.

Time to legalize machine guns, grenades, bazookas, and flack vests for all law abiding citizens with a simple routine background check. No one will be innocent bystanders. Everyone will be on one side or the other.

I say all this with a bit a tongue in cheek sarcasm but it could get that bad if left unchecked soon. Take it to the cartels in Mexico for our benefit and to prevent Mexico from being a totally failed state run by cartels. Maybe it already is...

Fake news isnt just what is reported by tye so-called “news” media. It is also what is not reported.

If the President Of Mexico isn’t screaming for help, then he’s in with the crooks.

Good article. Thanks for posting.

One thing the article says to which I take exception is where he says it’s a shame we aren’t paying attention to it. I’m definitely paying attention. It’s not my fault that most of the media aren’t reporting it.

Valid point.... there are a lot of things not being reported.

Fraud of public programs and benefits is the most under-reported story in America costing taxpayers a massive amount of money. Mexico and all of Central America has been descending into chaos for many years and it now appears certain that the “warlords” (aka organized crime) will win. In fact, there is evidence that they (immigrant organized crime) are now practicing the fraud here in America, but there is no public scrutiny.

The frightening fact in this story is how cartels now fight over legitimate industries such as agriculture. How long before they begin doing the same with public assistance programs here in the U.S.? While we are much more immune to rampant lawlessness by organized crime than these nations, it is a fact they go where they can make money.

I know that several different MSM sites are reporting this, but I have not seen one picture of any of it. I would really have a hard time accepting this even if it was a reputable news agency.

The Washington Post talked about Rebar ladders to get over the second wall. Ever tried to make something like that out of rebar? If it is thick enough not to bend under the weight of the person, the d**n ladder would be heavier than a Chevy.

Nobody is going up a rebar ladder without significant life events occurring.