Here’s the deal: Presidential candidates issue plenty of pointed barbs in debates, but they use a lot of filler language, too.

Phrases such as “let’s be clear” and “the end of the day,” buy the speaker time to collect themselves, think ahead and formulate an answer. Among the Democratic contenders, the fact is, Vice President Joe Biden utters them most frequently (and “the fact is” has been his most-used phrase).

The Wall Street Journal identified 23 commonly used three-, four- and five-word phrases and their variations spoken by candidates during the four Democratic presidential debates and tracked the number of times they were said.

Mr. Biden used almost six filler phrases for every 1,000 words he spoke, the highest rate among the Democrats still running and far above their average of 2.6.

Asked about the findings, Biden spokesman TJ Ducklo said, “The fact of the matter is that poll after poll has shown that Joe Biden is the candidate who will defeat” President Trump.

Debates are strange environments, linguists say. Candidates are under pressure to deliver quick, precise responses that sound extemporaneous. There is little of the back-and-forth of normal conversation, in which one speaker might backtrack or revise their phrasing based on feedback from the other participant.

“There’s a weird, artificial feeling to [debates],” said Julie Sedivy, a cognitive scientist who has written about politics and language.

The cognitive demands are high, so easy-to-summon phrases like “first of all” and “here’s the deal” allow candidates to momentarily hold the floor while they formulate the more substantive part of their statement, Ms. Sedivy said. For the listeners, the words draw attention to the speaker’s next remark while conveying certainty and authority.

“These seemingly empty bits of speech are doing quite a bit of work in an incredibly demanding environment,”

This buys Joe a lot of time to really think about what he wants to say.

And his answers STILL make no sense.

2 posted on 11/22/2019 10:59:09 AM PST by ClearCase_guy (If White Privilege is real, why did Elizabeth Warren lie about being an Indian?)
[ Post Reply | Private Reply | To 1 | View Replies]
To: karpov
Banal, trite phrases "buy the speaker time to collect themselves, think ahead and formulate an answer." -- Moronial Authoresses Lindsay Huth and Lakshmi Ketineni

Any sentient person KNOWS Democrats cannot think. The so-called "debates' and the race to give away the most trillions proves that beyond a shadow of a doubt.

...and it still left Mr. Biden plenty of time for hair-sniffing and child-fondling.

TJ Ducklo said, “The fact of the matter is that poll after poll...”


Anybody else see the irony there. :D

You have never heard Trump utter one of those trite overused phrases. 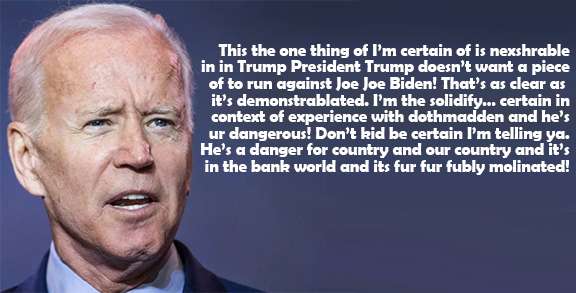 We are better than this

Not who we are

When was America ever great?

bridge the gap between

to start a conversation

we choose truth over facts

do not use gendered language.

“violent white supremacist ideology” that “offends us all.”

we won the popular vote

men can have periods

there are more than two genders

When you are not a person who TOUCHED a book after HS, that is how you have to talk.

Love Trump’s Hate!
My Favorite.
Thanks.