The truth behind House Intelligence Chairman Adam Schiff’s role in engineering President Trump’s impeachment may soon come out. Judicial Watch, a nonprofit group promoting government transparency, is suing to get the whistleblower’s e-mails.

That’s good news. Because no matter what comes of Trump’s Senate trial, Schiff should be held accountable for his devious methods.

The public also needs the truth about the so-called whistleblower. Real whistleblowers deserve to be treated like heroes. But Eric Ciaramella — the man Judicial Watch and many media accounts have identified as the whistleblower and who doesn’t deny it — is no hero.

To dignify Ciaramella with the term “whistleblower” misrepresents what he did. Sure, he filed what is technically called a whistleblower complaint. But he had no firsthand knowledge of Trump’s controversial July 25 phone call or motivations. Every allegation in the complaint begins with “I learned from multiple US officials,” or “multiple officials told me,” or “officials with direct knowledge informed me.” Just gossip. He never names any sources. Ciaramella acted as the anti-Trumpers’ front man. As for courage, not an ounce: He is cowering from public view.

Time is not on their side, and the Democrats are wasting it.

Lawrence Tribe’s advice was good... for us. 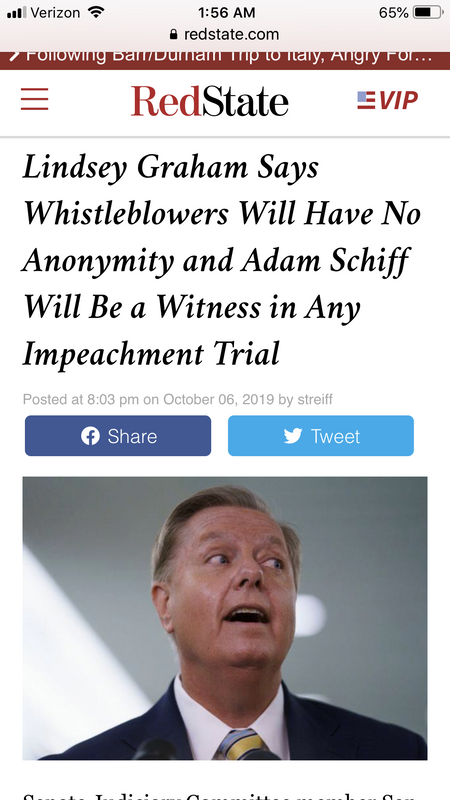 Lindsey doesn’t want to incur the wrath of the intelligence community.

The 5th Amendment gives PDJT the right to face his accusers and Schitt used the blower to launch his circus. Schitt is up Schitt Creek. All whistleblower protection grants is he cannot be fired for blowing the whistle. But perjury in his official blow is fair game. >>To dignify Ciaramella with the term “whistleblower” misrepresents what he did.<<

So why is referred to in the article as a whistleblower? Eric CIAremlla is a spy.Words do have meaning.

For some reason I got an email from him today. Never before. Asking for 5 or more dollars.

Then it is past time the bring the Intelligence community to heel.

No one is indispensable. No One.

Lindsey was directly threatened by Joe Biden, who knows exactly how much money Lindsey and John McCain got from corrupt Ukraine.
If Joe goes, Lindsey does too.

.
Deny him a penny, my friend.

As I know you will!

13 posted on 12/30/2019 8:50:49 PM PST by DannyTN
[ Post Reply | Private Reply | To 5 | View Replies]
To: bitt
Because the whistleblower is not a whistleblower, was given someone else's script, with Schiff's advance knowledge, so the impeachment is a criminal conspiracy to falsely accuse the President of the crimes Democrats committed, especially those of Joe Biden. If there is a real trial with a real cross examination, the fraud will be exposed.

Do I get a prize?

Even if I could afford to give a penny it would not head that way.

A penny saved and all.

Well since he doesn’t know the name of the whistleblower, how will he know if anyone talks to him or her.

There, just a bold correction to the headline.

To dignify Ciaramella with the term “whistleblower” misrepresents what he did. Sure, he filed what is technically called a whistleblower complaint. But he had no firsthand knowledge of Trump’s controversial July 25 phone call or motivations. Every allegation in the complaint begins with “I learned from multiple US officials,” or “multiple officials told me,” or “officials with direct knowledge informed me.” Just gossip. He never names any sources. Ciaramella acted as the anti-Trumpers’ front man. As for courage, not an ounce: He is cowering from public view.

Ping for your attention, article from the NY Post. Proves exactly what I was trying to get through to you in that previous thread. . . ICIG Atkinson could not have "proved" that Ciaramella’s complaint contained "direct knowledge" because, as cited above, "Every allegation in the complaint begins with ‘I learned from multiple US officials,’ or ‘multiple officials told me,’ or ‘officials with direct knowledge informed me.’”. . . nothing in his allegations was confirmable. For ICIG Atkinson to even investigate the actions of the President of the United States he was going rogue, acting completely outside his statutory jurisdiction. Atkinson had no authority at all to investigate anyone outside the Intelligence Community and he knew it.

Eric Ciaramella was not at any time accusing anyone in his allegations of wrongful actions over whom the Intelligence Community Inspector General has statutory jurisdiction for which the ICIG could legally open an investigation for any reason, even to determine if Ciamarella’s allegations were credible or not, because his accusations named no one covered in the statute. In fact, the statute specifically excluded the person so named from ICIG Atkinson’s jurisdiction under several provisions that Atkinson could not possibly have been ignorant, given that statute was specifically one that empowered his position.

By proceeding as if the complaint were just an ordinary routine action against a member of the Intelligence Community, when it was statutorily anything but routine, failing in his duty to determine that difference the law required by his oath of office to make, ICIG Atkinson’s actions proved his anti-Trump bias and demonstrated abuse of his office. Atkinson continued that abuse when he chose to ignore the three independent legal rulings by career legal counsels about his complete lack of statutory jurisdiction and then unilaterally, arrogantly, and illegally overruled three levels of his own superiors to transmit the case to Congress. I think that makes him complicit in the plot.

-and see how every opportunity the press gets they turn it against GOP and Trump-case in point: Biden is challenged and yelled at campaign stop , asked about Ukraine etc by multiple people-and flummoxed- (one yells he is not a Trump supporter)-and conservative media reports it that way-USA Today and other msm media turns it around reports it this way:
“Biden confronts hecklers at rally”

makes it a positive action statement for Biden, calls it a rally (very few people) , makes it seem like Joe is good guy-notice no mention of good economy , just bad Trump.

Get the acquittal and get back to message of “its the economy stupid” and jobs,jobs,jobs-anything else is a loser