The recent use of arms by a skilled, armed defender, Jack Wilson, in the West Highway Church of Christ in White Settlement, Texas, was recorded on live stream video. (below)

In spite of rapid attempts to suppress the video, it has been made available to the world, via social media and the quick actions of freedom-loving activists.

The actions in the video are crystal clear. An armed, skilled, volunteer congregant stops an active murderer with one shot after two of his friends are shot and killed. The entire action happens in six seconds.

The defender acted with skill and grace under fire. Within a few seconds, several other armed congregant volunteers converge on the downed murderer.

None of the chaos and multiple deaths, predicted by those who wish a disarmed population, happened, in spite of several armed, volunteer, congregants.

The actions and video are one of the clearest refutations of the arguments of those who want a disarmed population, that has happened in recent years.

How have those who want us disarmed, responded?

Their first, and most common response, is to retreat to their fantasy of a world without guns. From flobalob, comment at dailymail.co.uk:

Three people died because of those guns. If there were no guns nobody would have died.

There are many variations.  From a comment by RedRobinHood in the dailymail.co.uk:

Wait a minute , the NRA made sure a madman had a gun in the first place.

TOPICS: Constitution/Conservatism; Crime/Corruption; Culture/Society; Government; US: Texas
KEYWORDS: banglist; church; guncontrol; limeys; nra; secondamendment; texas
Most of the supporters of disarming the population argue in favor of a fantasy, a society without guns.
1 posted on 01/06/2020 6:12:33 AM PST by marktwain
[ Post Reply | Private Reply | View Replies]
To: marktwain 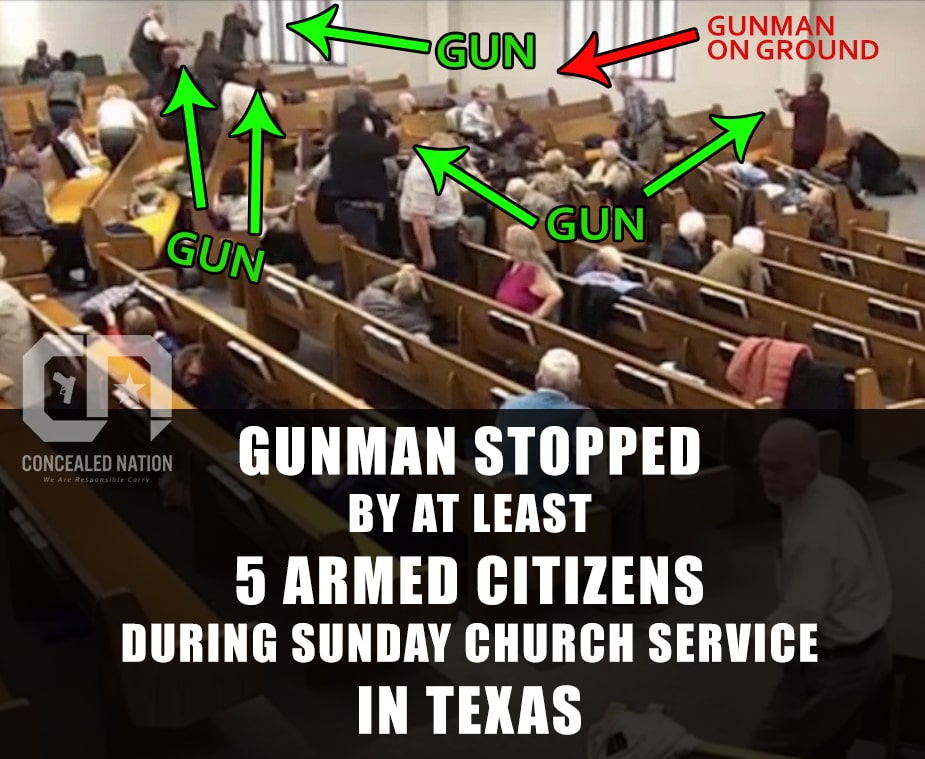 And knives without pointy ends.

They ignore facts in order to push their nefarious agenda and cannot be trusted. Ever.

America had better wake up to this fact and swing the pendulum back to the right. We need a right wing nationalist tsunami or this country is finished.

The defender acted quickly and accurately. He obviously didn’t stop to think about his own safety and it’s equally obvious he has trained and prepared himself for moments like these. What a hero.

HST, it is a shame that two good guys died. Note that the bad guy apparently knew they were members of the church’s security detail.

Does the Anti-Gun Mob Have a Self-Inflicted Mental Disorder?
http://www.freerepublic.com/focus/f-news/3805940/posts

The first one who died was drawing his weapon and took the bad guys attention off of the others. He is also a hero, probably knowing he wouldn’t be able to draw in time. But the other good guy made sure that debt was paid.

That is the way all these church shootings should be handled and should end. Anybody who says otherwise is just plain stupid. Would it have been better if the shooter killed 20 and then walked away, or was taken by the police and kept alive in prison by some lawyers for some 30 years?