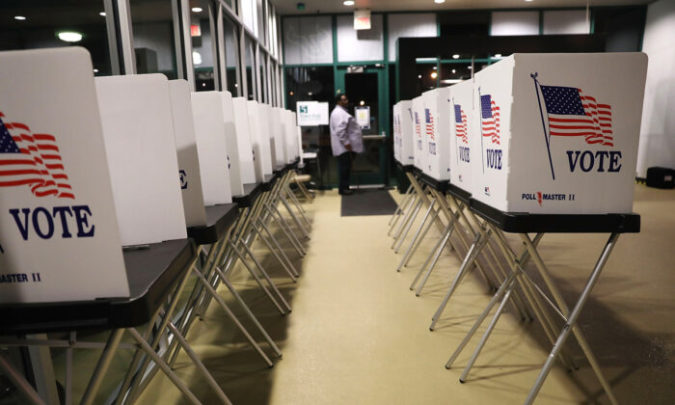 By: Trevor Loudon | The Epoch Times

The State Power Caucus has already had a major political impact in Virginia, Florida, Kentucky, Texas, California, and several other states. This alliance could decide the 2020 election—yet it’s operating almost completely “under the radar.”

In July 2017, 20 state-based organizations from 13 states united to form the State-Based Power Caucus. The organization has no website and has generated very little publicity. We don’t even know its full roster of member organizations or the identities of most of its leaders.

What we do know is that most of its identified leaders come from “orbit” of Liberation Road—the United States’ main pro-China communist party. We also know that at least 22 major organizations in at least 15 states have now joined the caucus.

Most known leaders of the State Power Caucus have some connection to Liberation Road. Known until recently as the Freedom Road Socialist Organization, Liberation Road is descended from radical Maoist groups from the 1960s and ‘70s. While no longer exclusively Maoist in outlook, Liberation Road maintains ties to China, Cuba, and other communist nations and movements.

Identified leaders of the State Power Caucus include:

Anthony Thigpenn—founder and president of California Calls and leadership team member of the State Power Caucus.

Most of the State Power Caucus affiliates are led by Liberation Road cadre or supporters. Some of the organizations are former affiliates of ACORN, the discredited “community organizing” organization exposed by Project Veritas, Glenn Beck, and others.

Confirmed organizations affiliated to the State Power Caucus include:

It’s no secret that the communist rulers of China would love to see President Donald Trump defeated in 2020.

Therefore, it’s not surprising that Beijing’s American franchise has a plan to do just that.

“Inspired by the disaster of Trump and Trumpism two years out most organizers are engaged in barroom or coffee shop speculation about the 2020 election. …

So how does Liberation Road plan to harvest these millions of potential Democrat voters? They claim credit for nearly 4 million new voters in 2016—but the target is way higher for 2020.

“Over the last twenty-five years, state power organizations have grown to fill the political space created by the decline of Democratic Party local organization, the breakup and collapse of ACORN, and low levels of voter turnout. …

“These organizations have deep strategic knowledge and practice in their particular states. Starting in the summer of 2017 many leading state-power organizations have come together as a caucus to support peer-to-peer learning and incubate innovate organizing practices. …

“The State Power Caucus has worked to first analyze the collective reach of the national networks who engage in electoral and civic engagement work. …

“We’ve also begun to assess the collective impact of state-based organizations. Looking at 2016, our rough estimate is that at most 4 million people were contacted and encouraged to vote. This is our high-water estimate. The actual number who actually voted is probably much lower still.

“Now, recall the 108 million people who were eligible but not voting? They are largely our ‘core’ constituency, or in other terms, they are our unorganized social base. This 108 million when compared to the voting electorate is more Black, more immigrant, more working class and poor.

“If we initially target just half of the 108 million, and we acknowledge that some in that half are going to disagree with our values and politics, some aren’t going to vote no matter what, and some are in geographies that we just can’t reach, we believe our real voter mobilization target number is 40 million, and we’ve agreed as a caucus to that number as our target. That’s our natural consistency.

“These are the voters or potential voters who put AOC and Ilhan Omar into Congress. They are our friends and family, and they are the everyday members and supporters of our organizations that fight for racial justice at the state and local level.”

The State Power Caucus believes that 40 million new anti-Trump voters is both realistic and achievable.

“The long game to defeat white nationalism and move past neo-liberal corporatism is by building a bottom up movement of 40 million people.

“At a minimum that is a movement where people vote consistently and consciously. Where people share our values for racial, gender and social justice and where people believe they have the capacity to rule.”

Does the Republican Party even understand what’s coming? While President Trump is confronting China on trade and challenging China’s military in the Pacific, his voter base is being undermined by pro-China communists in Florida, Georgia, Texas, and Arizona. If Liberation Road can flip only two or three states in the South, a China-appeasing Democrat takes the White House in 2020.

The United States stands one election away from permanent socialism—otherwise known as “communism.” If the Democrats win in 2020 they will use the organs of the state to destroy their enemies. They will flood the country with immigrants, legal and illegal, and they will swamp the conservative voting base. They will consolidate their power just like they did in Cuba and Venezuela, and a free America will be over forever.

And all this could happen because a few hundred pro-China communists, with mountains of money from the Democracy Alliance, unions, and tax-free foundations are allowed to out-organize Trump and the Republicans in the South.

It’s perfectly legal to sign up “minority” voters for the Democratic Party. It’s not legal to do that to the advantage of a hostile foreign power.

The State Power Caucus and their constituent groups should become the number one priority for federal and state investigative bodies.

Trevor Loudon is an author, filmmaker, and public speaker from New Zealand. For more than 30 years, he has researched radical left, Marxist, and terrorist movements and their covert influence on mainstream politics.

Communists sure don't have much respect for the "bad comrades" who disagree ever so slightly with the "People's Party."

Does anybody know anything about these guys. Is this just smoke, mirrors or both?

In case there was any doubt that the democrat party=Communist party..

If this movement picks up steam then it will seem the majority of the country wants a different form of government which means a totally different country. The issue now isn’t to try to stop them, but to actively reach out to those who could fall prey to such empty promises and show them a better way. Honestly, God is the only one capable of stopping this through his people. The other thing is they are starting pretty late in the game, but we’ll see ....

Does anybody know anything about these guys. Is this just smoke, mirrors or both?

Ordinarily I’d say this was another conspiracy theory. But if it’s Trevor Loudon blowing the whistle, it’s very likely true & worth worrying about.

Anyone know anything about this?

I wonder how Brad Parscale feels about this.

Every one of those groups has the stink of death.

Ordinarily I’d say this was another conspiracy theory. But if it’s Trevor Loudon blowing the whistle, it’s very likely true & worth worrying about.

Flipping Florida: How Pro-China Communists Plan to Turn the Sunshine State Blue in 2020

We could end so much vote fraud by just making all of this get out the vote crap Illegal. It should be Illegal. Voting is a responsibility. It is not a game.

Sorry, I don’t see President Trump’s base being convinced by theses slugs.

I live in NC, and I just discovered thru personal research of various counties for a house, that cheaper for sale homes have been swallowed up. I found the below article to substantiate some of what will be happening in 2020.
My real estate agent said earlier today, that the market had dried up for reasonable home prices....in past three months.
I remembered the voter fraud here in 2018 and 2012....Obama won NC, but only by 8000 votes. A recount listed online found later that he did not win, as there were votes exceeding that, which were fraud...nothing was done about that as he was already in office over 1 yr.
My point is this...NWO has billions of $$ and are buying addresses for fraudulent illegal votes. Only 5 or 6 states are agreeing for popular vote push to elect Democrat in 2020, to break Constitution...see article link from Canada Free Press below.
Voter Fraud will be unbelievable by Treasonous Dems this year....and NC has history of dead people voting in my area. AND now several of us searching for investment real estate are recognizing the quick purchases of NC properties for an address, and do not believe they will be homes for some buyers. Please research your counties in your state and ask real estate agents, if their available properties for sale are suddenly being purchased and drying up...seems suspicious here. We are a popular place in Mtns and coast, but even in worst counties, same scenario.

Thanks for that link. Just horrifying!