Trump Supporters Are Responsible for Near Moral Collapse of the United States, Says Alec Baldwin
flagandcross.com ^ | January 13, 2020 | By John Salvatore

You should be laughing after reading that headline. Hollywood goofball Alec Baldwin knows very little of which he speaks, but he honestly believes what he says is on-point.

What more do you need to know about the Democrat Party? They are cool with killing unborn babies, ripping up the Constitution, tossing Christianity out of America and forcing more and more government regulation down the throats of each and every Americans, but Republicans are responsible for the nation’s “moral collapse?”

Says the man who called his child a ‘little pig’.

When I think of morals, “Alex” Baldwin is the first thing that pops into my head.

Everyone knows that Hollywood, film actors and the movie industry are paradigms of virtue.

Says the person who should never, ever be compared to Gene Rayburn.

His definition of “morals” is everybody doing what is right in their own mind.

Was he drunk (again) when he said that?

Yeah! Like those of us here support the killing of 100% innocent humans at birth by whatever means possible /sarc. Just stuff it Baldwin.

And did a skit on SNL as a perverted Boy Scout leader...

Anthony Hopkins on Why He Doesn’t Talk About Politics: ‘Actors Are Pretty Stupid’

In a conversation with fellow actor Brad Pitt for a lengthy chat for Interview magazine, Anthony Hopkins explained why he seldom — actually: never — talks about politics... and why he’s not a big fan of other actors talking about politics either. In short: “Actors are pretty stupid.”

“People ask me questions about present situations in life, and I say, ‘I don’t know, I’m just an actor,’” Hopkins told Pitt. “ I don’t have any opinions. Actors are pretty stupid. My opinion is not worth anything. There’s no controversy for me, so don’t engage me in it, because I’m not going to participate.”

“There seems to have been an actual decline in rational thinking. The United States had become a place where entertainers like Baldwin/the psycho and professional athletes were mistaken for people of importance.

They were idolized and treated as leaders; their opinions were sought on everything and they took themselves just as seriously — after all, if an athlete is paid a million or more a year, he knows he is important … so his opinions of foreign affairs and domestic policies must be important, too, even though he proves himself to be both ignorant and subliterate every time he opens his mouth. (Most of his fans were just as ignorant and unlettered; the disease was spreading.)”

Robert A. Heinlein, To Sail Beyond the Sunset

Wow! I keep checking to see if it’s a Babylon Bee story.

Funny, some people say exactly the same thing about you and your Hollywood colleagues, Mr. Baldwin.

I think both sides are right. Everyone bears some responsibility for the collapse of moral standards.

When you’re in league with the devil, morality is immorality, and vice-versa.

You make me laugh. 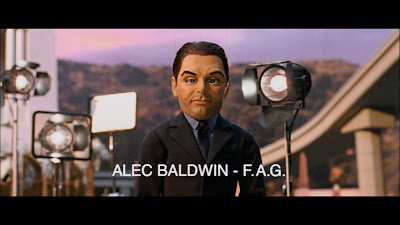