China is rapidly redefining itself as a rogue nation, too dangerous to stay in bed with as an integral part of the world economy. Reuters, no ally of the anti-globalists and populists shaking up politics in the US, UK, and elsewhere, reports:

After reviewing reports on the outbreak from the National Development and Reform Commission (NDRC) and other economic departments, Xi told local officials during a Feb 3 meeting of the Politburo’s Standing Committee that some of the actions taken to contain the virus are harming the economy, said two people familiar with the meeting, who declined to be named because of the sensitivity of the matter.

He urged them to refrain from “more restrictive measures”, the two people said.

Translated: Don’t worry about spreading this plague across the globe, the Communist Party needs the economy to be robust, so keep the factories open, along with the subways and busses needed to get workers to their jobs.

China’s trading partners see the matter rather differently.  The leaders of the Chinese Communist Party have proven themselves willing to sacrifice the lives of tens of millions of their citizens in order to achieve their political goals, as the politically-induced famines under Mao Tse-tung prove. And reports leaking out of China seem to show a brutal disregard for human rights and lives in China’s response to the coronavirus.

If I had a business that depended on Chinese components, I’d be setting up alternate sources as fast as I could.

2 posted on 02/14/2020 7:13:14 AM PST by kidd
[ Post Reply | Private Reply | To 1 | View Replies]
To: SeekAndFind
LA and SF don't bother with basic sanitation any more because making an effort to abide by the sanitation laws that are already on the books would cause street brawls and make the incumbent democrats look bad. Possibly so bad that other democrats would take over at the next election.

Stories about where China is now with regard to things like this virus outbreak should be an incentive to fix the US before we're nationwide as bad as the cities where the democrats now rule.

3 posted on 02/14/2020 7:14:09 AM PST by Rashputin (Jesus Christ doesn't evacuate His troops, He leads them to victory !!)
[ Post Reply | Private Reply | To 1 | View Replies]
To: SeekAndFind
China now is widely understood by all to be unreliable lairs about anything that threatens the interests of the Communist Party

So what will the world be getting then? Buy a item on Ebay/Amazon and get the Coronavirus with it for free?

Yep! Flu Hoax to damage our economy and payback at trump? Hmmmm ..makes you wonder. Remember trillions and a nation’s world power grab are at stake here!! Everything coming out of communist VERY RED china should raise a yellow flag!! Caution! 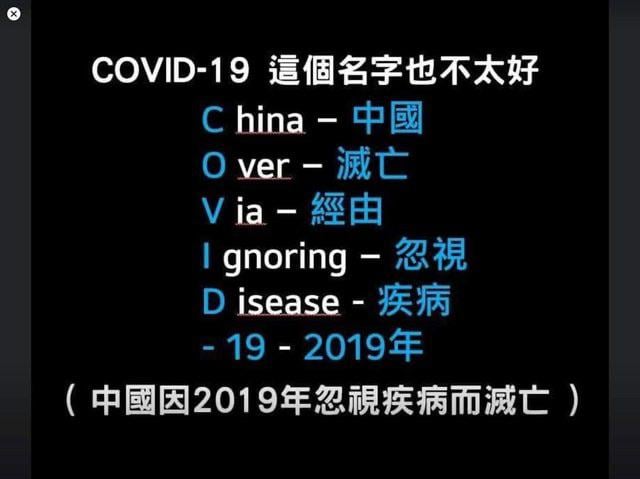 From the country who has willfully murdered 100’s of millions of it’s own people...this is surprising??

Gee... probably be too bad if President Xi Jinping came down with the Coronavirus.

There’s been a lot of ‘chatter’ over medical products made in China, and bluntly....they carry the bulk of medicine production in the world right now. India has some items that it produces and might be able to increase production.

It wouldn’t surprise me if by mid-summer that some blood-pressure items are hard to find, and Trump puts incentives out there to get US companies back into a production cycle.

“” “” China is rapidly redefining itself as a rogue nation, too dangerous to stay in bed with as an integral part of the world economy. “” “”

Gee... probably be too bad if President Xi Jinping came down with the Coronavirus.

Just send him to a Chinese hospital, dedicated staff to give Big Luck care.

Bring Out Your Dead

If a quarantine saves just one child's life, it's worth it.

This is what a strong central government cando. That’swhyour Foundersso wisely discouraged that mistake and codified the Second and Tenth Amendments to the Constitution.

Unfortunately, we traded that critical freedom for promises that the DC government would take care of us, using our money, of course. It makes office holders wealthy and makes the taxpayers poorer, not the republic that Ben Franklin hoped we would keep.

My buddy who lived in China for 10 years and I have been joking that this was inevitable for over a week now. Xi don’t care how many Chinese are sick or dead, there’s plenty more where they came from. Just keep the factories rolling and already there’s a lot of disruption as this came on the heels of the new years holiday shutdown where normally companies accumulate a backlog and have to work extra hard to make up for the holiday time off. Now they can’t and are falling even further behind and customers around the world are being forced to look at higher-cost alternatives. In addition key components are being bought up by panic buyers creating even more supply chain chaos.

Xi has to straighten this out because screwing up the economy is probably the one thing that will get him in big trouble with his CCP bosses.

Next time something goes bad over there, they will hide it and the world will never know until it's too late.

Wow. And the fact that we know this shows just how out of control it must be in China. I mean they can confiscate all the cell phones and laptops or whatever they do over there the word gets out. It kind of reminds me of Radio Free Europe, I think it was called, during the Cold War. One way or another, freedom and the truth get out.

Yes and on Tucker Carlson the other night, he reported that the virus has been found to spread through water pipes coming through any tiny crack. A person in apartment 10 floors apart from another apartment, contracted the virus. “Think about that,” he said.