"President Trump is the one who did this, and I'm ... profoundly grateful," Blagojevich, who was a Democrat, told reporters Tuesday night at Denver International Airport.

"He's got obviously a big fan in me," said Blagojevich, who has gone totally gray since entering prison. "And if you’re asking me what my party affiliation is, I’m a Trump-ocrat."

"He didn't have to do this. He’s a Republican president; I was a Democratic governor," Blagojevich said. "My fellow Democrats have not been very kind to him. ... In fact, they’ve been very unkind to him." “”Blagojevich said. “My fellow Democrats have not been very kind to him. ... In fact, they’ve been very unkind to him.”

I expect the democrats will send him to re-education immediately to get his head on straight.

Of course what he did was wrong but I did think his sentence was excessive.

We paid 20 million dollars to settle lawsuits for rapist congressmen and women who should actually be in prison for their actions.

This sentence should have been 5 years out in 3

Puzzled by this week’s pardons. Why are surely-guilty officials & bureaucrats being favored by Trump?

I’ll trust, but these are concerning.

Wow, prison has really aged him. I wonder if this tiger can really change his stripes? Or is it, once a nasty rat, always a nasty rat.

What Trump is doing here is the equivalent of leaving a horse’s head in the FBI’s bed.

Basically he’s sending a message that any case touched by Comey or Mueller was likely tainted, and he is going to use his pardon power to preserve justice regardless of party affiliation.

Corrupt though he may be, Blago still has influence with many Democrats. He will convince at least some to vote for Trump. This is an ingenious infiltration and undermining of the Democrat voter pool.

Nobody want so smuggle Grecian Formula in their rectum.

But, it doesn’t matter. Fact is, this president does it during an election year, not ten minutes before leaving office like the rest.

If you hand out manslaughter sentences and the guy is out in five years....then all lesser crimes ought to reflect lesser years as well.

I think in Blagojevich’s case, it was a commutation, not a pardon.

I agree that the stiffest sentences MUST be reserved for those who take a human life.

That lady Trump pardoned last year had done 21 years for drug possession. That’s about three times as long as most people do for manslaughter.

Killing a police DOG here in PA could get you more time than killing a human being. Killing one via abortion lets you off scott-free.

The scales must be recalibrated.

11 posted on 02/19/2020 7:07:52 AM PST by Buckeye McFrog (Patrick Henry would have been an anti-vaxxer)
[ Post Reply | Private Reply | To 9 | View Replies]
To: Oldeconomybuyer
I found this humorous. Jerry Rice sporting sneakers in the Oval Office. I love looking at wide angle photos like this. They are so high def anymore you can really zoom in and look at things. 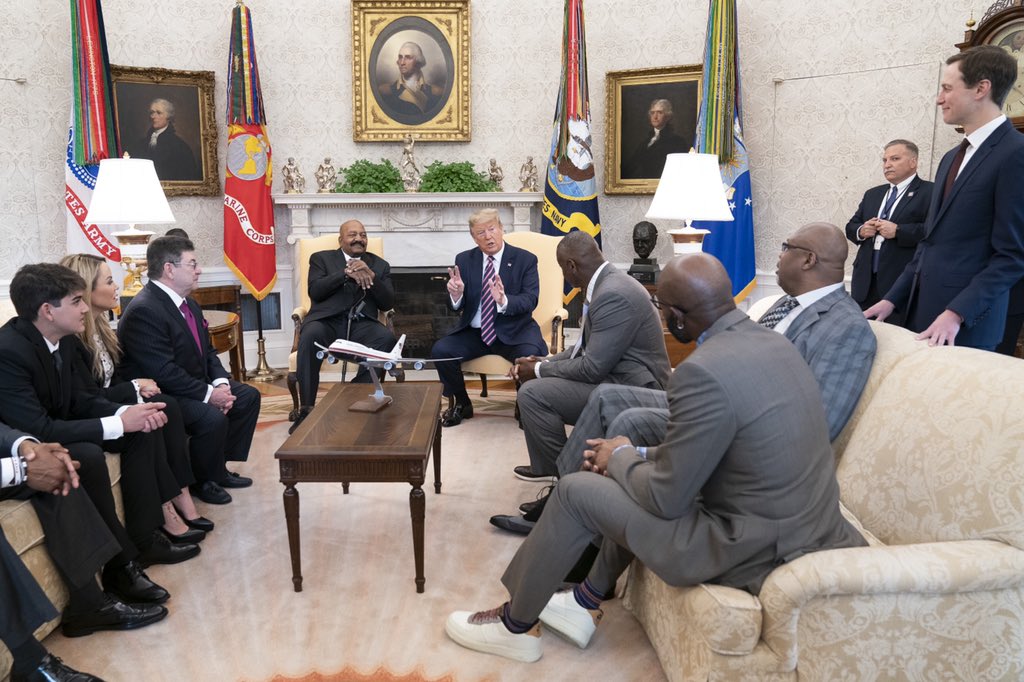 IIRC, Obama was the only one on the ticket. So, I'm thinking about all of this.

I don’t know about that. Other than frost on the punkin’ it looks as if prison life did him some good to me. I suspect he wasn’t exactly doing hard time.

Perhaps his release/pardon provides evidence and other very fruitful threads and crumbs into the State of Illinois’s political swamp.

Democrats have no use or interest in him any more. IL gov and state pols are condemning Trump for turning this super-criminal loose early.

Listen to what Blogo has to say. Jesus forgives and so can we.

Trump is putting a thumb in their eye here. The folks that over sentenced Blago are the same Mueller pirates that tried to railroad Trump.

Agreed...... Comey had his hand in this conviction. Exactly what he is doing. This is an end-run around for DJT. Whatever will we do when he eventually leaves office. Hopefully he’ll still tweet.

Please everyone donate to Jim / FR so we can end these fundraisers. that’s my 2 cents.

Blago has long been rumored to have A LOT of dirt on Barry Obama.

A LOT of dirt.