Rumors were rampant in mid-April when North Korea's communist despot, Kim Jong Un, disappeared from public view at a surprising time: when the entire benighted citizenry of the country is required to worship his grandfather Kim Il Sung as some kind of Marxist deity. In a country this shackled, we would expect reliable news media to tread lightly. But that expectation would be wrong.

Two weeks ago, CNN anchor Jim Sciutto -- former chief of staff to our ambassador to China under former President Barack Obama -- tweeted, "Breaking: The US is monitoring intelligence that North Korean leader Kim Jong Un's health is in grave danger following a surgery, a US official with direct knowledge tells me."

MSNBC anchor Katy Tur threw more tinder in the box, tweeting: "North Korean leader Kim Jong Un is brain dead, according to two US officials. He recently had cardiac surgery and slipped into a coma, according to one US current and one former US official."

How many times during the Trump era have we witnessed one or two "senior U.S. officials" feed the media a "bombshell" story that turned out to be wrong? The nation's top media outlets just say, "Trust us," when they hide the identities of their sources, because this information is so crucial and important. Debacles like this underline why the public should be skeptical of this daily lack of transparency.

Tur later took her tweet down. Sciutto's still sits on the internet.

After the North Korean version of Russian newspaper Pravda put out photos of the dictator cutting a ribbon at the opening of a fertilizer plant, the story changed. Our anonymous U.S. intelligence analysts believe he is alive and well. The primary debunker of these rumors was the South Korean government, which insisted Kim never even had surgery.

Former CNN producer Steve Krakauer asked in his newsletter: "Speaking of accountability in the media -- what is the penalty when a journalist gets a story monumentally wrong? The truth is -- it depends what the story is, and who the journalist is." This was not an accountability moment.

It doesn't matter that Sciutto has launched other collapsing stories, like his claim last September that President Donald Trump caused the government to withdraw an important intelligence asset from Moscow in 2017. Soon after, The New York Times reported that its sources said the CIA "made the arduous decision in late 2016 to offer to extract the source from Russia" -- weeks before Trump even took office

But a NewsBusters tally of live, on-air CNN coverage found that the network spent a staggering 181 minutes on Sciutto's initial report, follow-ups and attempts to defend his faulty allegations. On the day this fraudulent story broke, Brian Stelter touted it in the "Reliable Sources" newsletter, even attacking Trump (as usual) under the newsletter headline "War on Truth, chapter 9/9/19."

In her Trump-campaign memoir, "Unbelievable," Tur groused at Trump and his fans saying: "(J)ournalism, honestly pursued, is difficult and uncomfortable. ... But rather than deal with journalism, we despise journalism. ... I don't get why protesting a broken political system also means you need to protest the very notion of objective truth."

Journalists like these should stop pompously protesting that they are a special class of humanity that represents "objective truth" and try harder to actually report some truth.

All news today is like the weather report, they may say one thing in the morning and at noon something else and a different prediction at 10pm.

Well whoever posted here that he was brain dead probably should have waited for some confirmation.

That’s for the media, I can confidently say that most of them are brain dead

I am SO disappointed. Here I was looking forward to widespread chaos in North Korea as the line of succession was worked out. But when they finally DO put Kim Jong Un to rest for good and all, the North Koreans will treat us all to how elections SHOULD be run.

The US leads the world in fake news media. 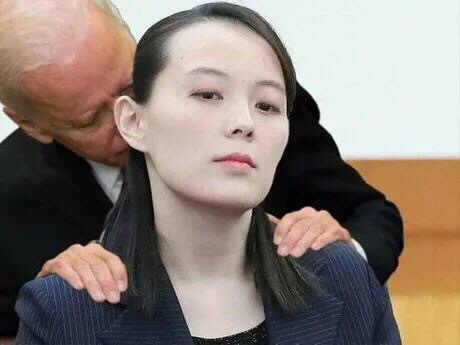 I just LOVE the humor of many of you people here on FR!

I’m just glad that I had just swallowed my coffee.

Not to worry, Kim Yo-jong: the sister of Kim Jong-un, is in good hands, the protective hands of Joe Hands Biden!

** Two weeks ago, CNN anchor Jim Sciutto — former chief of staff to our ambassador to China under former President Barack Obama — tweeted, “Breaking: The US is monitoring intelligence that North Korean leader Kim Jong Un’s health is in grave danger following a surgery, a US official with direct knowledge tells me.” **

One of the UK news papers say with photo that Kim Jong Un has a body double.
It’s the news media one never knows what is true.
Hitler had one I still think he made it Argentina,cowards do things like that.