A $275 million contract has been awarded to an Alabama company to start construction of a 14-mile border wall in Laredo, Texas.

Similar to other portions of border wall being built in South Texas and throughout the Southwest, this project will consist of a 30-foot-high bollard wall with all weather roads, enforcement cameras and special lighting, according to a announcement made by U.S. Customs and Border Protection late Friday.

This will be the first portion of a border wall to go up in Laredo, which sits across the Rio Grande from Nuevo Laredo, Mexico.

The contract was awarded to Caddell Construction Company LLC of Montgomery, Alabama, and construction is slated to begin in January 2021. However, much of the land in Webb County is privately owned and must be obtained before construction can begin.

TOPICS: Business/Economy; Foreign Affairs; Mexico; US: Texas
KEYWORDS: borderwall; immigration; laredo Navigation: use the links below to view more comments.
first 1-20, 21-28 next last
This is an area which has never had barrier before. Across the river is the hyper-violent cartel playground of Nuevo Laredo.

This segment will be funded with direct Congressional Appropriations (FY20) for this specific purpose, so it won't be part of any of the lawsuits based challenging the diversion of funds from the Military. Here is the CBP announcement: https://www.cbp.gov/newsroom/national-media-release/cbp-announces-contract-award-new-border-wall-system-texas

Caddell Construction of Alabama competed on the original wall prototypes, and has now finally won its first job on the actual wall itself. Here was their prototype design: 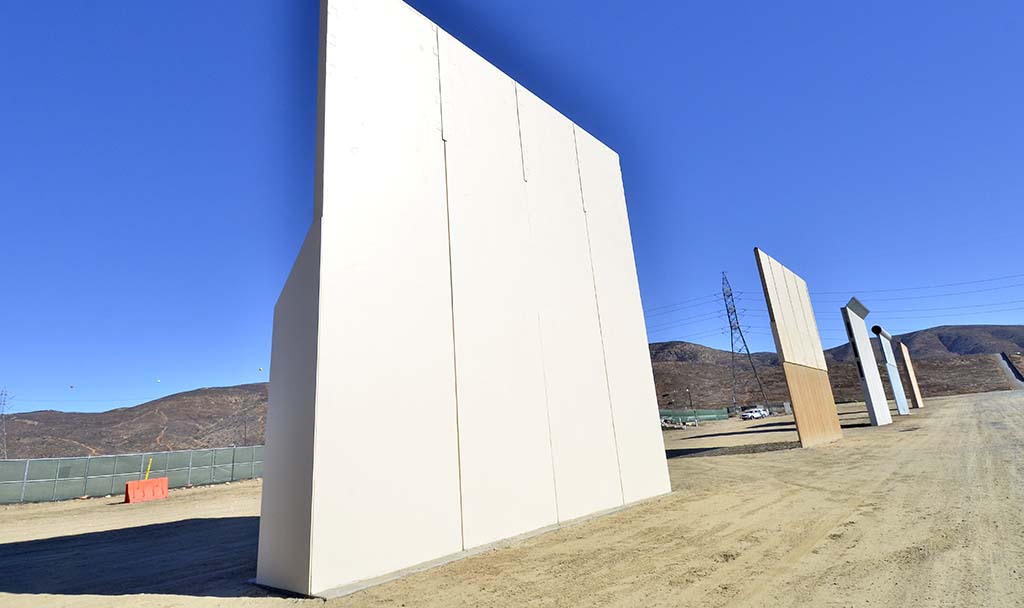 They will be building the same kind of mighty 30 foot bollard Wall System as everyone else - with the package of roads, lights, alarms and sensors that make it so effective.

As pointed out in "The Hindu" today (https://www.thehindu.com/news/international/us-awards-275-million-border-wall-contract/article31542034.ece):

"Much of the planned construction would cut through private land in neighborhoods close to the edge of the Rio Grande, requiring the government to take property through its power of eminent domain.

U.S. government lawyers have filed lawsuits against South Texas landowners — including homes, businesses, and a Catholic orphanage — to seize part of their property or gain access to survey it. In the adjacent Rio Grande Valley, federal courts have allowed the government to immediately seize some land to expedite construction."

Another contract award is expected on the 15th of May, according to documents recently revealed in a current court case by the the Sierra Club in the Ninth Circuit.

Another week, another sweet advance in border security.

Starting after four full years is too slow . . . and 14 more miles is not much. I could walk around that in one day (someone had to say it!), . . . but . . . it’s a start. Thank God for President Trump. I pray that he will continue and that by January 20, 2025, when the best President since Ronald Reagan (and perhaps ever) leaves office, our entire border will be secure.

Now that is a routine amount for the weekly drop onto new contracts.

We are starting to see Wall going up, like never before. It is going to be glorious!

Eventually a Democrat will be elected to the presidency. Hopefully, that will be far in the future. Anyway, then what would happen to the border wall?

I’ll bet my last dollar on possibility C. That’s why I have limited faith in the wall. It is valuable. But only until a Democrat gains the White House.
.

“Eventually a Democrat will be elected to the presidency.”

We must never allow that to happen.

“14 more miles is not much. I could walk around that in one day”

That is just one segment, of the approximately 70 miles funded through Laredo, which is bordered on the North by another 52 mile run funded last year (but the contract has not yet been awarded), and the over 30 mile long Falcon Lake to the South.

These contracts are starting to drop like rain. Almost weekly now.

14 miles of new Trump-style Superbarrier has already significantly transformed the situation in San Diego - the biggest city on the border. So it does make a major impact locally - security goes up, crime drops sharply, real estate values begin to climb steeply, and businesses start moving in closer to the border.

The bottom line is that a Comprehensive Plan for Full Operational Control of the Southern Border has been painstakingly developed, reviewed extensively by hostile auditors, and finally accepted by Congress (in December 2018) - and the Trump Administration has since diverted enough money to roughly build all the barrier in that plan. They are on track to obligate all of that money onto contract by the end of the year.

Little reported, is that the technology programs have followed the same general schedule as the big ticket Wall System Infrastructure Program. The first two years, just a little was actually done, as the analysis, tradeoffs and prep work were done. Then when the most efficient designs were agreed upon (Dec 2018), the big money bomb dropped for full scale deployment, when the President declared the Emergency (Feb 19), and diverted the money that was needed.

Technology Programs like Integrated Fixed Towers, Mobile Surveillance Systems and Ground Based Sensors are now on contract for full scale deployment. Per mile of border, they deploy more quickly than infrastructure can be built (especially in the rougher terrain) and at orders of magnitude lower cost. Aerial and space-based assets are ramping up sharply, as is command and control integration of the multiple sensors and systems, and across Government Agencies - especially with DoD.

There is a massive transformation under way. By size, cost or capability, this is (by far) the biggest non-Military border wall Program in human history.

Is nueva laredo still the home of the 50,000 watt radio power house?

More good news on the wall.

Many thanx for the update BeauBo

BeauBo posted this graphic a few days ago 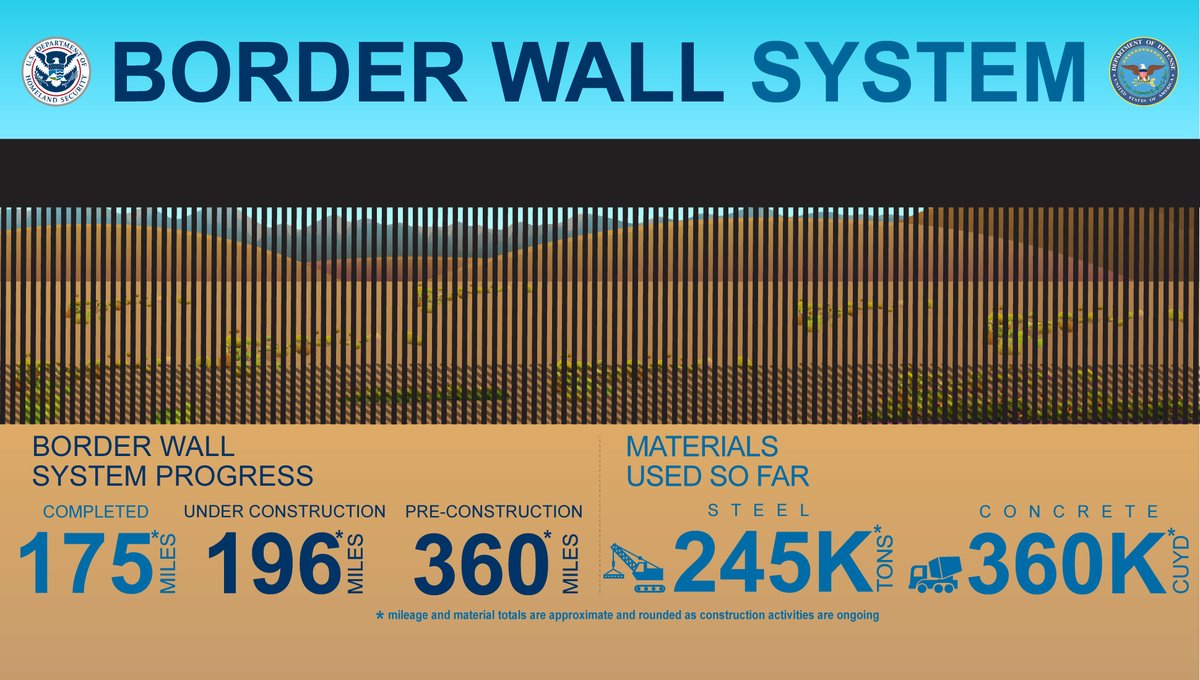 Trump’s Wall from Sea to Shining Sea (through early Mar)

Is that the former Wolf Man Jack radio station....?

Trump has to push congress to pass a bill preventing the wall from being dismantling after it is built. It must remain standing till Hell freezes over.

“I pray that he will continue and that by January 20, 2025, when the best President since Ronald Reagan (and perhaps ever) leaves office, our entire border will be secure.”

If the President is re-elected (Please God), and the existing Program and contracts continue to run (just with their existing funding), we will be approaching full operational control of the border toward the end of next year.

This year is dramatically different from past years, in the pace and scope of what is being deployed - and the effects that we will be seeing accumulate will be an order of magnitude greater as well - just by the end of this year in California, Arizona and New Mexico. Next year will be the bigger impacts in South Texas, although construction should really ramp up in the Rio Grande Valley Sector this Summer.

> Trump has to push congress to pass a bill preventing the wall from being dismantling after it is built. <

That would have been possible during the golden years of 2017 and 2018. The GOP had the White House, the Senate, and the House. Unfortunately House Speaker Paul Ryan was not very cooperative.

Now I fear it’s too late.

Hard to prevent that from ever happening, but if we can hold White House and senate, and win back the house, we could pass the immigration reform that’s needed to codify into law the steps that are currently discretionary and subject to executive order based on who is in the White House.

Trump is a populist conservative and is aligned with the majority, especially in flyover country (the red states).

Immigration system is riddled with special interest corruption. The Russia hoax and Ukraine finally has the political and elite corruption exposed. Both driven by the Democrap party.

Fix immigration from top to bottom. Campaign on it. The border wall is just the start.

“Fix immigration from top to bottom.”

That is really the Grand Prize - a new merit-based basic immigration law, from the ground up.

Really, with the impending wave of automation and robotization, cheap labor will just not be as valuable as it was in the past. The social services costs will be even more of a relative social cost.

THANKS for the link! I get some of the most fascinating links from FR posters.