Senate Minority Leader Chuck Schumer is itching to hear from Dr. Anthony Fauci as he testifies before the Senate Health Committee Tuesday morning. The Democrat believes that without President Trump looking over his shoulder, Fauci can tell them how he really feels about the administration.

Sen. Chuck Schumer: "This is the first time we get to hear [Dr. Fauci] without the President looking over his shoulder." 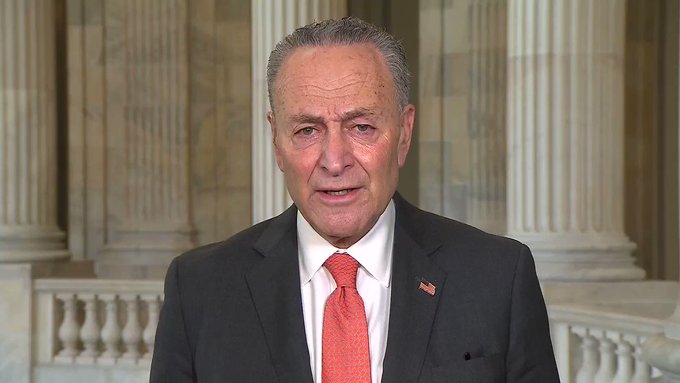 On the Senate floor, Schumer advised Dr. Fauci to "let it rip."

White House Press Secretary Kayleigh McEnany was quick to tell Schumer that he was guilty of wishful thinking.

"Perhaps Sen. Schumer was napping every Sunday morning when we put Dr. Fauci out on the Sunday shows," McEnany reacted on Fox News. As she reminded him, Fauci has called the White House's response "impressive."

The media has for weeks now been trying to drive a wedge between the president and his task force. Yet, Dr. Fauci has stood by Trump since the beginning, praising Trump's decision to ban travel to and from China back in January as having likely slowed the spread of the virus and saved thousands of lives.

Joining Dr. Fauci at Tuesday's virtual hearing include Dr. Robert Redfield, the director of the Centers for Disease Control and Prevention, Dr. Stephen Hahn, the commissioner of the Food and Drug Administration, and Adm. Brett P. Giroir, assistant secretary of health.

Cutting out in questions and answers.

This is not a workable solution for long term.

When Congress tries to pull their usual stunt of interrupting it doesnt quite work out as well.

Fauci is am marxist who likes to hang out people like Bill Gates.

I won’t listen to a word from him

As You are an EMBARRASSMENT & a HUMILIATION to the good/decent people of NY, RESIGN from Congress & GO HOME FOREVER.

Fwiw, you would be out of your “intellectual depth” in a mud puddle.

I stupidly think Schumer can’t get any smarmier or aggravatingly partisan but then he goes down to another sub-basement level.

And if I had a dog as ugly as Schumer I would shave his rear end and teach him to walk backwards.

Old saying but still true for him.

No worries. Soon he will be replaced by AOC. And she will be the voice of reason.

Prior to his taking the US Senate seat, Sen Schumer represented:

<><> the Ninth Congressional District in Brooklyn and Queens for eighteen years.

In March 2012, thirty-six Russians---Soviet immigrants----were arrested in Brooklyn, New York for plotting to bilk US health-insurance companies out of a quarter of a billion tax dollars.

The plot, according to the NY Times, involved ten doctors, nine clinics, and a hundred and five corporations: “The ring falsified official US govt documennts demanding tax dollars----reimbursements for a mountain of excessive and unnecessary medical treatments that were never done.

The Russian fraudsters were so brazen that they already had in-place three separate billing-processing companies just to handle the paperwork.....to get the tax dollars into their greedy hands faster.

SEN SCHUMER MUST HAVE SPRUNG INTO ACTION TO DEFEND TAXPAYERS BEING RIPPED OFF BY HIS RUSSIAN CONSTITUENTS. RIGHT?

NOTES---What’s remarkable here is just how unremarkable the story is, coming, as it does, out of Sen Schumer's district-----the Russia-centric Brighton Beach, Brooklyn.

Brighton Beach, Brooklyn, is famous for its Russian delicacies, entertainment, a population of highly-inflected Russian dialects, but mostly for its concentration of insurance fraud.

The NY Times reports, “Brighton Beach has one of the highest rates of health care fraud in the nation, according to federal statistics.

An analysis from the Centers for Medicare and Medicaid Services (agency regulates those two programs), shows that more health care providers in the Brighton Beach ZIP code are currently barred from the programs for malfeasance than in almost any other ZIP code in the United States.

THESE ARE CHUCKIE'S CONSTITUENTS---According to a NYC US Atty, 25 current and former Russian diplomats and 24 of their spouses allegedly participated in a scheme to illegally obtain Medicaid benefits by underreporting their income or falsely claiming that their children were US citizens. For nearly a decade, they milked the system of $1.5 million in benefits. The staff of Russian diplomatic offices in the US allegedly supplied false documentation to officials to bilk Medicaid.

The bilk was pulled off smoothly for decades.....and may have had official help----for a price. L/E needs to determine if Sen Schumer benefited from this fraud----and determine the ways he may have facilitated fraud.

Are Schumer's constituents hiding large amounts of assets from the courts adjudicating the Medicaid fraud?

<>>< Did Schumer use tax-paid offices to help facilitate felonies?

<><> Many of the diplos skipped town when the heat was on. Did they stiff US banks for fraudulent sub-prime mtges (which we taxpayers have to bailout).

How many ways are Schumer's constituents riding the US gravy train---this would be very easy to find out. Are they receiving:

Russian refugees automatically get set-aside jobs just for them---and by claiming "asylum" they got hefty SS checks without putting one cent into the system. They also get subsidized housing----Americans, vets were taken off the list in favor of Russian refugees.

<><> Did any of these diplos give Schumer campaign contributions?

<><>Did they donate to Schumer using their own names ---or the names of others?

<><> Did any of these people illegally vote for Schumer?

<><> Did Schumer use his tax-paid Senate offices to aid abet felonies?

<><> Do any of these diplos receive EITC refunds?

<><> Did Chuckie use his govt offices and US govt resources to setup other freebies for these criminals?

<><> Does he have a sub-prime mortgage obtainedby falsifying bank documents?

<><> Did they make false claims on IRS forms in order to get EITC refunds?

<><> Do they have valid passports?

<><> How many times did they wire-transfer money back to their homelan--where they apparently fled when the heat was on?

NARRATIVE Taxpayers demand to know the scope and dimension of multiple conspiracies by government insiders to collude in sub rosa deals to personally profit. Could be prosecuted under the Bank Secrecy ACT, RICO, and the Hobbs Act.

OF INTEREST TO LAW ENFORCEMENT--- Based on Sen Schumer's statements (and Senate vote for amnesty), Schumer approves the use of stolen SS numbers and multiple identities to defraud. The FBI should interrogate individuals for evidence of multiple schemes to falsify documents for additional insider schemes. The FBI should investigate any and all official documents submitted by Schumer's constituents.

Naw, Trump has had some awesome press secretaries !

Every single one has done great !

11 posted on 05/12/2020 8:47:39 AM PDT by Pikachu_Dad ("the media are selling you a line of soap)
[ Post Reply | Private Reply | To 8 | View Replies]
To: RummyChick
Liberal politicians (in or out of the WH) can't ever resist stage-managing American public events, American issues, American Presidential administrations, etc.

They think they have some kind of God-given right to subvert, supersede, overwrite and obstruct all/any authority within either their own or Republican administrations.

kinda reminds me of the next generation of Kellyanne???

Scumbags that have been in the Senate and Congress for 30,40,or even 50 years have COMPLETELY screwed up everything they touch. And now they have the gall to tell us they know better how to fix it?

She’s looking to be a honey badger, this one.

Many Dem voters were “independents” which means uninformed and lazy. Some were suburban women who thought Trump was harsh and unkind in his name calling tweets.

Most said the reason for their Dem vote was “It’s better to have one thing be a different party than have one party in charge of the Presidency, Senate and House.”

Oh Yeah? So you impeach an innocent man and hold up his plans to help you people with a conservative reduction in regulations, interference and big government? You allow the slandering of Kavanaugh, Flynn and others to suit a leftist smear agenda. And gridlock stalls a better America thanks to the hatefully partisan Dems? And so far the guilty leftists have gone free with media covering for them.

You Americans owe me big time. I will not forgive.

There should be a wedge between Trump and Fauci, the pal of unapologetic Nazi collaborator George Soros.

This particular $H## show is coming from the Senate, where it’s supposedly run by Republicans.